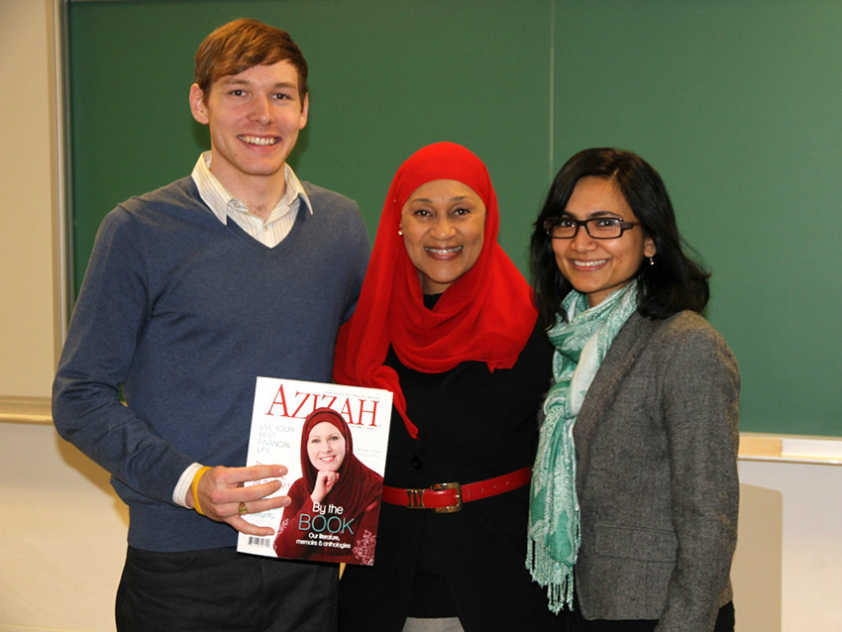 Tayyibah Taylor at the University of Ottawa with Professor Rukhsana Ahmed.
15
March
2014

The editor of a successful American Muslim women's magazine was in the nation's capital as part of a country-wide tour commissioned by the U.S. Embassy last month.

Azizah Magazine Editor-in-Chief, Tayyibah Taylor, was in town to discuss media portrayals of Muslim women, and how her magazine has aimed to shatter stereotypes. Muslim Link's Miriam Katawazi was get a one-one-one interview with Taylor, who was named one of the 500 Most Influential Muslims by Jordan's The Royal Islamic Strategic Studies. Born in Trinidad to parents from Barbados and raised in Toronto, Canada, Taylor embraced Islam at the age of 19.

Azizah Magazine, first established in October 2000, provides a platform for Muslim women in America. Taylor said that for decades Muslim women have been defined by other people's misconceptions. She said her magazine empowers Muslim women to “define their own agenda.” This often includes profiling Muslim American women who have achieved success and recognition in their various professions.

Azizah Magazine also tries to portray the diversity of women in America's Muslim community across race and religious sect. “We try to reflect the rich diversity in the community in terms of ethnicity and schools of thoughts- we try to show it all,” Taylor explained to Muslim Link, “We have gotten flack with that because people say well Ahmadiyyas are not Muslim, why are you including them? Well, if you call yourself a Muslim, you're Muslim. I always say unity does not mean uniformity. You have to understand this community is the most diverse community around.”

In order to explore this diversity, Azizah Magazine has tackled some controversial issues, such as birth control and polygamy. “We don't try to be provocative; we try to be thought-provoking," she explained to Muslim Link. She added that the magazine doesn't want to cause controversy but aims to “open conversations up in people's minds.”

During her presentation at the Ottawa Citizen boardroom on Feb. 25, co-sponsored by the Canadian Council of Muslim Women (CCMW) and Cordova Academy, Taylor explored the subject of Muslim women's empowerment by highlighting the achievements of American Muslim women who were astronauts, entrepreneurs, judges, environmentalists, athletes, and engineers.

Many people in the West, she told the audience, formulate their understanding of Muslim women through news media and other forms of popular media. She explained certain depictions of Muslim women are repeatedly portrayed by these sources. These depictions, she said, include portraying Muslim women as victims or as something to be feared or avoided. She says sometimes these outlets also describe Muslim women as the “exotic other.” “Very rarely is she emulated or admired,” she added.

Critical of Quebec's Charter of Values, Taylor said, “I don't believe people should be in the business of telling people what to wear.”

She explained there is a paradox in the fact that certain democracies give women the right to uncover but not the right to cover. It's interesting, she said, that in France Muslim women could go to a nude beach and uncover but she couldn't work in a public building with a headscarf. “There is something about a covered woman that makes people uncomfortable,” she stated.

She explained that people are “socialized about the female body by things like Hollywood and Playboy Magazine.”  “I think when a woman covers, she is demanding people to first look at her as an intellectual being or a spiritual being and very last as a sexual or physical being,” she stated.

Audrey Saparno, a Canadian Muslim who came to hear Taylor speak, said the presentation was very “pretty”, just like the magazine.  “In the sense it shows all kinds of women in a very positive light. A bit of me is happy and a bit of me is saying, ”˜is this really the reality of Muslim women?'” she shared.

Saparno said the reality of Muslim women is that they are not simply the images portrayed by mainstream media as the oppressed and victimized but they are also not all high-achievers, either.  Saparno explained that there are Muslim women among newer and older immigrant populations and women with different socioeconomic statuses.  Some women are “really great in their field, some are just average, and some are just doing really great with their children.” She added, “Muslim women, and all women, for that matter, are diverse and we need to appreciate that diversity.”