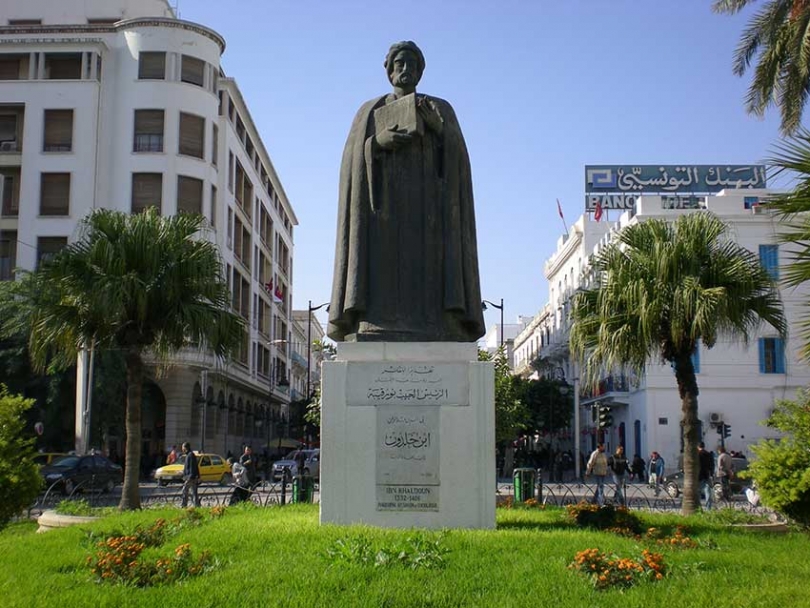 A statue of the 14th century philosopher/scientist Ibn Khaldun in his birthplace, Tunis.
13
May
2011

However, according to the tax theory of the famous Islamic scholar Ibn Khaldun, the Conservatives got it right.

Abu Zayd Abd al-Rahman Ibn Khaldun (732-808/1332-1406), historian, statesman and social philosopher was born in Tunis where he was well brought up and received the best education, both religious and modern. He died in Egypt where he had settled down during the last years of his life. He was a descendant of a prominent Andalusian (Spanish) family that left Spain before its fall to Christians. His ancestry, according to him, originated from Hadramaut, Yemen.

The Muqaddimah (Introduction), written in 1377, is considered Ibn Khaldun's greatest legacy. This monumental work, considered the most important Islamic history of the premodern world work, laid down the foundations of several fields of knowledge, including philosophy of history, sociology, ethnography, and economics.

The core of Ibn Khaldun's theory of taxation, in his own words, is “to lower as much as possible the amounts of individual imposts levied upon persons capable of undertaking cultural enterprises. In this manner, such persons will be psychologically disposed to undertake them, because they can be confident of making a profit from them.”

Thus, he advocates for decreasing the burden of taxation on businessmen and producers, in order to encourage enterprise by ensuring greater profits to the entrepreneur and revenue to the government. He describes the advantages of low taxes:

Ibn Khaldun argues that an increase in tax assessment will have the opposite effect. Taxation begins to eat so heavily into business profit that business enterprise is discouraged: “”The result is that the interest of the subjects in cultural enterprises disappears, since when they compare expenditures and taxes with their income and gain and see the little profit they make, they lose all hope. Therefore, many of them refrain from all cultural activity. The result is that total tax revenue goes down, as (the number of) the individual assessments goes down."

In our modern times, high tax rates are the primary cause for companies moving overseas.

Having observed very well the history of the dynasties, Ibn Khaldun finds that at the initial stage, the government relies on low taxes, in keeping with Islamic law. As a result enterprises increase in number and size and thus permit tax base, tax revenue, and governmental surplus to grow. He says:

“At the beginning of a dynasty, taxation yields a large revenue from small assessment. At the end of a dynasty, taxation yields a small revenue from large assessment. The reason for this is that when the dynasty follows the way of the religion, it imposes only such taxes as are stipulated by the religious law, such as charity taxes, the land tax, and the poll tax. They mean small assessments, because, as everyone knows the charity tax on property is low. The same applies on charity tax on grain and cattle, and also to the poll tax, the land tax and all other taxes required by the religious law. They have fixed limits that cannot be overstepped.”

“The dynasty, then, soon starts to adopt the luxury and luxury customs of sedentary culture, and follows the course that had been taken by previous dynasties. The result is that the expenses of the people of the dynasty grow. Especially do the expenses of the ruler mounts excessively, on account of his expenditure for his entourage and the great number of allowances he has to grant. The (available) revenue from taxes cannot pay for all that. Therefore, the dynasty must increase its revenues, because the militia needs (ever) larger allowances and the ruler needs (ever) more money to meet his expenditures.”

Djankov et. al. in a 2010 cross-country study used data collected through Pricewaterhouse Coopers on 85 countries along with datasets on foreign direct investment and entrepreneurship to calculate the impact corporate taxation has on a number of variables. After implementing a number of controls, they found that a “10 percentage point increase in the effective corporate tax rate reduces the investment to GDP ratio about 2 percentage points. According to the study, reduced investment in countries with higher corporate income tax rates is not due to access to capital, rather that high corporate tax rates “reduce incentive for investment.”

Empirical studies of tax cuts that took place in USA during the twenties, sixties and eighties also support Ibn Khaldun's theory of taxation. For instance, during the 1980s policy of tax cuts used by President Reagan, referred to Reagonomics, major tax legislation passed in 1981 and 1986 reduced the top U.S. federal income tax rate from 70 per cent to approximately 33 per cent. The performance of the U.S. economy during the eighties was impressive.

It is said that the effect of taxation on incentives and productivity was so clearly visualized by Ibn Khaldun that he seems to have grasped the concept of optimum taxation. Ibn Khaldun emphasized various principles that must be observed to have a sound taxation policy, such as equity and efficiency, justice and neutrality, ability to pay, economy, benefit and convenience principles.

Ismail Barreh holds an MBA and a certificate in Islamic banking and finance.