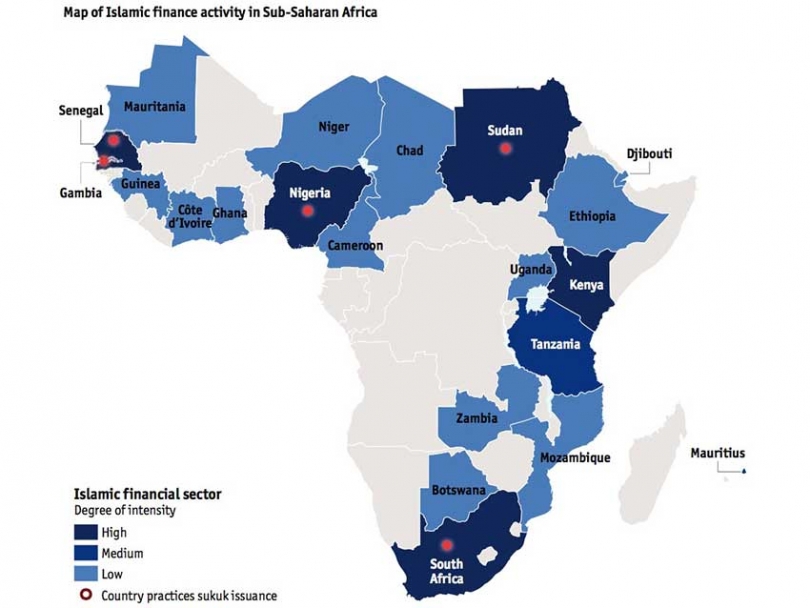 Although Africa is a resource-rich continent, many countries within it have achieved strong economic growth without trading in oil or minerals.  For example, East Africa, where oil has only recently been discovered (and has yet to be commercially exploited) boasts the fastest-expanding regional economy on the continent. The Economist reports that Ethiopia will grow 7.5 per cent this year without having sold a drop of oil. Although a long term decline in commodity prices may hurt growth on the continent, African governments are investing wisely, most notably in infrastructure. Technology applications in mobile phones and political stability are the two main non-commodity drivers of economic growth.

China is not the only financial powerhouse with its hungry eye on Africa. Oil-rich Gulf states, too, are eying profitable opportunities among the hundreds of millions of Muslims in Africa. But would the Islamic financial system expand beyond the current Gulf Co-operation Council (GCC) member states and Malaysia, to other countries, and in particular to African countries? To many, Islamic banking has an untapped market in Africa, what with over 51 per cent  of Africa's population being Muslim.

However, banking in Africa raises several challenges. First and foremost, there are serious infrastructure needs such as new logistic networks linking airports, railways, and warehouses””and new dams and electricity grids to power them. Meanwhile, Africa's growing cities need better water supplies and sanitation. There is a large unbanked population which needs finance for agricultural development, export finance, and particularly microfinance. Despite these challenges, there are opportunities. In Sub-Saharan Africa, which is the least developed part of the continent, almost 70 per cent of the population had mobile phones in 2008. Therefore, banking services could be delivered to the unbanked population via mobile phone as in Kenya and South Africa.

Although Islamic banking launched in Egypt in the 1960's, the industry is still in its infancy across the continent. A report by Kuwait Financial House on the future of Islamic finance in Africa says the continent hosts just 38 Islamic financial institutions.

Islamic banking is well established in Sudan where only shariah-compliant (Islamic law) finance is allowed. A number of Gulf banks, familiar with the country”˜s language and oil resources, have joined  Sudanese investors in opening Islamic banks. Last year, the first sukuk (financial certificate) from Africa was issued by a Sudanese cement firm. The government also tapped the market in January --selling bonds to Gulf investors.

North Africa represents a large and still untapped market of 190 million people. With the Arab Spring and the fall of hostile regimes, there are huge opportunities in these countries.

In West Africa, the development of Islamic banking can be witnessed in Nigeria and Senegal. However, the central banks of these countries must amend their banking laws to accommodate Islamic banking.

Despite the potential for growth, Islamic banking cannot succeed in Africa unless it considers the unique of needs of Africans. Islamic finance as practiced in other parts of the world today, focuses mainly on the urban middle class and heavily favors debt-based financing. There is little agricultural lending, microfinance, or use of innovative technology. People living at a subsistence level have little need for bank accounts and if these people are to be raised from poverty, there is need for investment to develop African economies.

Islamic finance can support everything from small-scale projects, such as farming, to huge projects, such as infrastructure and energy. Agriculture and commodities are very well suited to Islamic finance contracts -- indeed it is where Islamic financial instruments started. The Salam contract, for example, was designed to pay farmers for crop that would be delivered later.  Micro takaful (Islamic insurance) can also be very useful in rural Africa where crop failures and epidemic diseases are problems for African farmers.

One of the most promising areas of growth may be project finance and sukuk. The continent's vast need for infrastructure is matched only by the shortage of investment funds. Africa's major development challenges are the acceleration of economic growth and the reduction of poverty. Research has shown that well-designed transport infrastructure projects clearly contribute to poverty reduction by improving the living conditions of people and by augmenting the opportunities available for trade and employment. Islamic finance can help in project finance and infrastructure development via long term sukuk, a financial instrument well developed in the industry. In fact, project finance is well suited for Islamic financial instrument which need to be backed by physical assets.

In conclusion, the growing demand for shariah-compliant products and services by Muslims wanting to comply with their religious beliefs, and the increased demand for the ethical risk-taking approach of Islamic finance (particularly in the wake of the recent global financial crisis) are encouraging signs for the growth and development of Islamic finance in the continent . However, several hurdles hinder the ability of Islamic finance to succeed and thrive in Africa: lack of competent employees, fragile infrastructure, and low-return on some project. Tax laws currently are a major obstacle to Islamic finance in Africa. South Africa, Kenya, and Tanzania are in the process of reviewing tax laws with Nigeria and Senegal to follow suit.