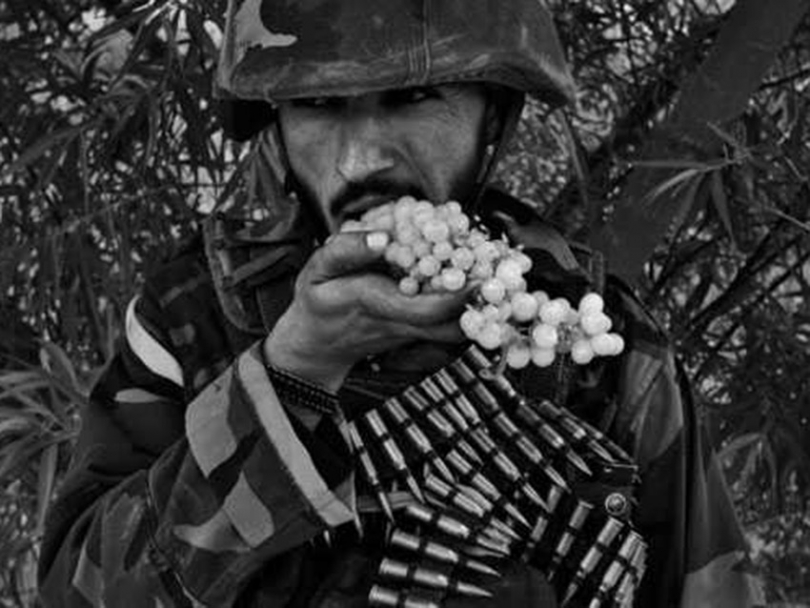 Stories and images from an Afghan war zone

andahar-The Fighting Season is a new exhibit that is sure to garner a lot of attention from those with an interest in Afghanistan.

The exhibition at the War Museum features sixteen intense, some even haunting photographs taken between 2006 and 2001, during the war in Afghanistan.

Award-winning photographer Louie Palu accompanied Canadian soldiers to Kandahar Province in Southern Afghanistan. He captured their world of firefights and exhausting patrols in some of the most dangerous districts of Kandahar (said to be the heartland of the insurgency).

The majority of the photos were shot while Mr. Palu was on patrol with Canadian, American and Afghan soldiers or embedded with medevac helicopter teams. A “behind-the-lens” commentary by Mr. Palu accompanies each photo.

One of the most striking images is that of a shocked looking Afghan soldier staring at his Canadian comrade after a furious firefight.  The look of fear and uncertainty in the soldier's face is unforgettable.  Another unforgettable image is that of an Afghan soldier looking at one of his colleagues with a wide-eyed terrified look, knowing that their squad is on the verge of being overrun by Western forces.

Dr. Andrew Burtch, a post 1945 Historian at the War Museum of Ottawa, first met Mr.  Palu in 2006.  He says that a primary goal of the Kandahar exhibit which runs through September 2013 is to provide as many Canadians as possible a glimpse of the landscape our soldiers fought in and endured for five years.

The exhibit demonstrates the diversity of the land of Kandahar province and shows that although the province was a relatively small part of the country of Afghanistan, much of the conflict was centered there.

Of the 154 Canadian troops were killed in Kandahar; 137 of those were combat casualties.  Only three Canadian soldiers died outside of Kandahar.

Dr. Burtch says the exhibit is also intended to give the public a greater understanding of the accomplishments of Canadian photojournalists.

Kandahar province, which has an area roughly the size of Nova Scotia, consists of 54,020 square kilometers.  At any given time, approximately two thousand Canadian soldiers have patrolled through this southernmost province of Afghanistan, which borders the area near Quetta, Pakistan.  Mr. Palu covered nearly every Canadian and American unit in Kandahar from 2007 to 2010, including over 150 medevac missions with the 101st Airborne.

Mr. Palu affirms that Kandahar and Kabul are two very different places.  Kandahar, though much more sparsely populated than the Capital city, is the birthplace of Afghanistan.

“From what I was taught by many Afghans, Kandahar is just as significant if not more important to Pashtuns in general throughout the region,” he says.

“Kandahar is a very coveted region by many people who wish to control it, hence the Pashtun proverb ”˜control Kandahar and you control Afghanistan.”

He adds that he learned more from spending time with the Afghan soldiers rather than Western soldiers, because only the Afghan troops could teach him about the country's rich history and culture.

The photographer also says that Afghan soldiers saved him several times from being injured or killed.  “(Afghans) had a remarkable ability in seeing ambushes before they happened, land mines and knowing how the insurgents operated. These were valuable survival lessons and tools that helped me avoid being seriously wounded or killed,” he says.

Many of those viewed as “insurgents” by Western powers in this conflict are viewed in a different lens by Mr. Palu.  He sees them as soldiers and defines an insurgent “as someone who revolts or fights against an established government.”

His favourite photo in the collection is one of an Afghan soldier eating grapes.  He has special fondness for this picture because it is void of any violent acts which necessarily make up a large part of his photographic repertoire and that of the Kandahar exhibit.

Mr. Palu says that this particular picture demonstrates vividly the stark contrast in war; that of exquisite beauty conflicting with gross ugliness.  Palu adds depth and context to his description.  “The contrast of the bullets on his chest and the grapes talks about the sweet and sour contrast of what war is vs. the beauty of nature's bounty in the form of the grapes.  I also like that it is an Afghan soldier, because it is very much their country we need to learn about,” he says.

I asked Mr. Palu if he feared for his life during his time in Kandahar.  His response was straightforward. “There were many times when I thought I would be killed and not survive, but somehow with luck I made it,” he says.

“The thing that I am most happy about more than anything is that my mother never got that dreaded phone call a parent might get when their son is killed.”