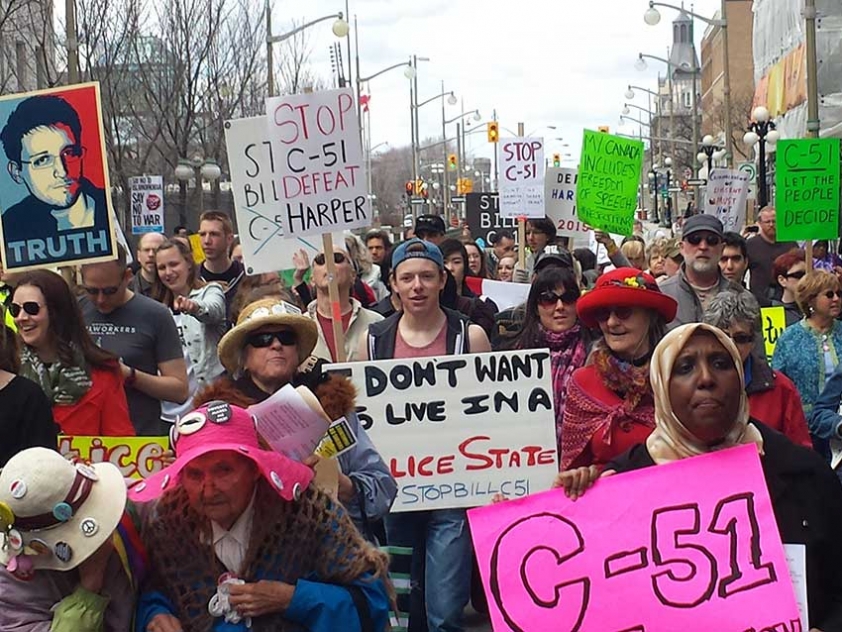 On April 18, Canadians demonstrated against Bill C-51 across Canada. In Ottawa, demonstrators walked through the Byward Market in order to raise awareness about the dangers of the bill. M. Dourou
25
April
2015

Who has the most to fear from C-51? Canadian Muslims.

Just over a month ago, Canadian citizen Benamar Benatta quietly settled his lawsuit against the federal government over the unlawful treatment he suffered in the days immediately after 9/11.

Benatta, an Algerian, spent five years in American prisons because Canadian border officials at Fort Erie, Ont., turned him over to U.S. officials for investigation after he showed up at the border crossing and said he wished to claim refugee status. It took him years to clear his name.

“Canada is a great country but, unfortunately, there are many examples where Canadian officials have dispensed with human rights in the name of national security,” Mr. Benatta said after his lawsuit was settled.

“People need to understand a terrible injustice was done to me. I was labelled a terrorist because I happened to be Muslim … That is racial profiling at its worst. These Canadian officials ruined my life without a second thought, and that is really hard to bear.”

Benatta’s story is yet another cautionary tale that should convince Canadians — and their government — of the need to stop and think before granting even broader powers to law enforcement agencies. Canadian Muslims know that what happened to him could easily happen again — and that they’re likely to be the ones paying the price for flaws in the federal government’s new and hastily-crafted anti-terror law, C-51.

Justice Dennis O’Connor, overseeing the inquiry into Maher Arar’s case back in 2006, said as much. “Given the tendency thus far of focusing national security investigations on members of the Arab and Muslim communities, the potential for infringement on the human rights of innocent Canadians within these groups is higher.”

Look beyond these high-profile ‘false positive’ terrorism cases — which have robbed some Canadians of their reputations and livelihoods, and have cost the taxpayer millions of dollars in compensation in the few instances where the government was held to account — and it’s clear there are many more Canadians out there suffering racial profiling, particularly while travelling. Many Canadians are seeing their passports suspended, are being turned away from border crossings or are otherwise being treated unfairly — without full explanations. This little known and humiliating reality was brought into sharp view earlier this year when a Toronto ER physician and his family were denied entry to the U.S. for a planned trip to Disneyland.

Under C-51, Canadian Muslims can expect more, not less, of this sort of discrimination. Even after the Conservative government buckled to pressure to amend the law, Canadians can still be deemed too dangerous to travel by airline and won’t be allowed to challenge the “evidence” against them. As lawyer and author Faisal Kutty puts it, Canadian Muslims can be considered “too guilty to fly, but too innocent to charge”.

The Arar Inquiry report offered recommendations on how to ensure that the egregious mistakes made by law enforcement discovered by the inquiry would never be repeated. The government has ignored most of them.

Law enforcement agencies already have many tools at their disposal under existing (yet seldom used) anti-terrorism measures. It’s up to the federal government to justify the further erosion, or outright suspension, of Canadian rights and freedoms. It has not done so.

Bill C-51 is a reckless attempt to win over an understandably fearful electorate under the pretence of fighting terrorism.

Rather than implementing a new and dangerous security regime that fails to guarantee safety, the government should heed the advice of security experts and leaders who argue that community partnerships are urgently needed to effectively confront the threat of violent extremism. Simply put, we won’t be able to spy and arrest our way out of this problem.

What’s needed now is a national, comprehensive and well-funded grassroots campaign based on mutual trust, solid research and genuine scholarship. Marginalizing the very Canadians who are on the frontlines of this struggle is worse than poor policy — it’s a threat to all of us.

Amira Elghawaby is the human rights coordinator at the National Council of Canadian Muslims (NCCM). This article was originally published in ipolitics.ca.