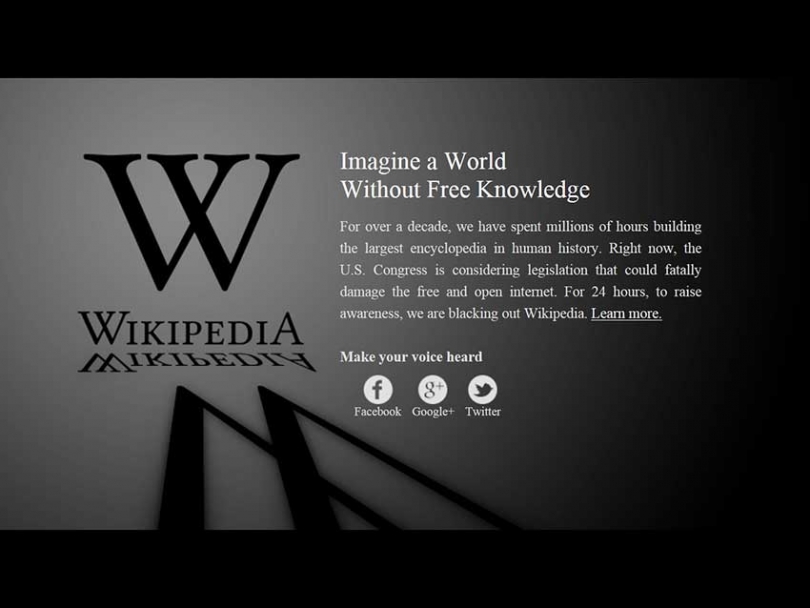 To raise awareness about the potential harms of SOPA and PIPA, Wikipedia joined an internet blackout on Jan. 18. Photo credit: Omar Mahfoudhi
12
February
2012

Not your ordinary SOPA opera

We have all at some point used something that wasn't ours, perhaps the pen from a colleague's desk, or a sibling's bike. This happens either with or without the rightful owner's permission. And we all know how the drama unfolds when it's the second case.

The general community as a whole, and quite frankly the Muslim community in particular, suffer from a similar type of “borrowing” malady. I'm talking of course about the unauthorized use of media to pass off as our own.

We have used photos from the internet in our slideshows and posters, used music from our favourite nasheed artists in our family movies and comedy clips on YouTube, and of course copied text from sites and books and passed it off as our own. Of course you may say what's the harm, or my personal favourite, “Allah will compensate you”. And this is where things get ugly.

You see, whenever you and I create something with our own skills and talents, whether it be articles, photos, a website design or learning materials, the most we expect is recognition from others. The multimedia industry on the other hand wants profits, and lots of it. There is no blame on them for that. The real blame is on how they choose to tackle profit losses.

The industry, fed up with what they call “piracy”, decided to tackle it from a legal and political angle. You see, to them anyone who copies their work, movies, photos, text and music is causing them lost profits. This includes, in some cases, when you buy a song and make a copy on your computer, mp3 player, iPad and your dad's Blackberry. You see the industry would have you buy your own copy and have your dad buy his own copy. What you have instead is a family of pirates. This of course is an extreme situation, but not one that hasn't seen its day in court.

In the dialogue between Little John and Robin Hood, Little John describes their endeavours as “robbing the rich to feed the poor” when Robin rebuts “Rob? Not rob. More like, borrow”. This of course is the fundamental philosophical debate at the moment, which however is not the focus of this piece. Of course it is fair for an industry to suggest policies to better protect its business, just as it fair for you and me to pursue proper recognition and citation for work we've done. The difference of course is in the amount of power and legal clout one has to back their claims and pursue compensation.

Enter SOPA, PIPA and Bill C-11. The Stop Online Piracy Act, more commonly known as SOPA, and the Protect Intellectual Property Act, PIPA for short, are basically two versions of the same U.S. policy. Bill C-11, on the other hand, is the proposed update to the Canadian Copyright Act and has been dubbed the “Canadian SOPA”.

These piracy acts would make it possible for copyright holders to have any website anywhere in the world blocked in the United States or Canada if they are alleged to be infringing those copyrights. This is quite a bit of power to award unmonitored entities, particularly with the vague wording of the bills. Such unclear wording would give full power to copyright holders to identify and report potential infringement to authorities with little more than suspicion to back their claims.

Internet and law enforcement authorities would then have Internet Service Providers block infringing websites, and in some cases delete them if locally hosted. Under the Canadian bill, the “enabler” clause provides that media industries need simply claim that an entity is a repeat infringer and have their internet service terminated.

This is a scary prospect for internet users small and large alike. Since a lot of content is hosted on large internet companies such as Google's YouTube, Reddit, and Wikipedia these policies can affect them quite heavily. In essence these policies would force such companies and others such as internet hosts, news sites, and social networks to become internet police and censor potentially infringing content. This of course is the absolute opposite of the philosophy of a free web.

A free web is best epitomized by what we saw and have been seeing happen in the Arab world where social networking sites were one of the frontiers on which the revolutions were fought. If such laws were in place, a site with a video of someone chanting a slogan in the streets of Syria in a tune a little bit like some popular song might have had its content taken down or be blocked entirely. The wording and power in these policies would give room for a lot of abuse of the law.

In order to raise awareness about these policies Google, Wikipedia, Mozilla and a number of online giants joined in an Internet blackout on Jan. 18. Visitors to those sites found graphical representations of censorship, such as Google's search page or, in the case of Wikipedia, blocked service in the form of a mock censorship landing page.

Online hacker activists, or hacktivists as they are known, have also been on their toes exposing companies and entities that support the proposed policies. A hacktivist-led boycott of Internet service provider and domain registrar GoDaddy, led the company to rethink its initial support for the SOPA/PIPA bills. Such actions undertaken on a free web no less, saw a change in the attitudes of the powers that be. The position of members of the US Congress before and after the protest moved from 80 “for” and 31 “against” to 65 “for” and 101 “against”, overnight. Suffice it to say the bill was halted in Senate.

But what does this mean to you and me? Well if we look at our beloved community newspaper for example, we may not at first glance imagine that this policy could affect it. However, since all previous issues are archived online, this places the paper in the line of digital fire. If, for example, one of the images, or some of the text, whether in the content or advertisements were to be identified by a copyright holder to resemble its material, muslimlink.ca would be blocked or have its content deleted.

The true irony is that these efforts will not be able to stop piracy. There are ways to circumvent such blocks and most so-called pirate sites are hosted in countries that support the concept of media sharing.

In essence, these policies only serve to aid the already gigantic entertainment industry get more money and power. It would become a monopoly of entertainment that would see smaller creative upstarts shot out of the picture.

Fortunately these policies will not pass into law as they stand. Both governments are holding off until further research, information, and revisions are made to the policies. In the meantime, enjoy the free web and give credit to content makers if you use their stuff.

Let's pray that the internet does not become the next dictatorship.