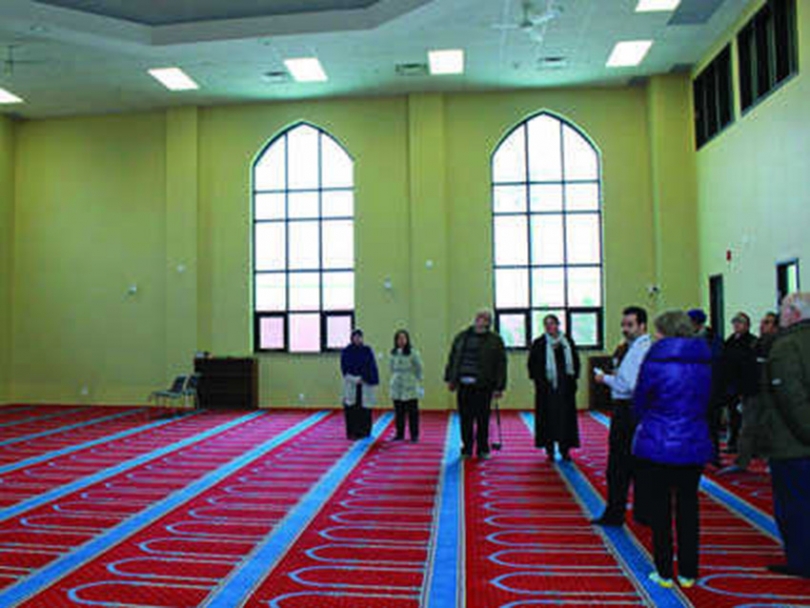 Faith & the Common Good, a non-profit multi-faith coalition, through its Greening Sacred Spaces program organized a green building tour of the Ottawa area dubbed the Sustainability Bus Tour. The tour introduced eco-tourists to various buildings around Ottawa which implement environmental initiatives or innovations in their design or practice. The tour involved a number of places of worship across Ottawa.

The tour was made up of people from all walks of life. From builders to community workers, businessmen to faith leaders, all were interested in learning about what faith-based organizations and communities in Ottawa are doing to reduce their ecological impact in our city. Some were even interested in implementing some of what they saw on the tour in their own community's places of worship.

The tour began with a visit to the église Sacré-CÅ“ur to see its energy efficient lighting upgrades. The church is situated in the heart of the University of Ottawa campus. The tour then visited the Emmanuel United Church, the second church in Canada to apply for LEED certification.

LEED or Leadership in Energy and Environmental Design standards identify practical and measurable green building design, construction, operations and maintenance solutions for builders and operators. There are many benefits of implementing LEED standards, most notable of which include reduced energy waste and operational costs, as well as comfort.

A Muslim presence in this tour was quite heartwarming. The eco-tourist had the pleasure of visiting the Bilal Mosque in Orleans which took LEED standards into consideration during construction. When we arrived at the mosque, we were greeted by the imam Shaykh Muhammad Badat, Noureddine Benichou a researcher at the National Research Council and volunteer at the mosque, and members of the Islam Care Centre,  Sulaiman Khan and Lisa Duchene, who are contributing members of the Greening Sacred Spaces network.

The mosque was quite beautiful and as you entered the main prayer area you immediately felt a sense of warmth. I mean warmth, of course, form a physical sense. You could not feel any drafts or cold floors.

Brother Noureddine led the tour of the mosque outlining some of its energy efficiency and comfort aspects. He didn't have to mention that they used high quality Turkish carpet and under padding, because you could feel it under your feet. He shed some light ”“ in my mind at least ”“ as to why it felt so comfortably warm. First of all, they had employed large windows made of gas-filled dual layer glass to let in as much natural light and heat as possible when needed, while reducing heat loss from the large surface area of the glass. The windows were arch shaped and resembled ones you might see in Spain. He went on to explain that the insulation rating of the walls and ceiling goes above and beyond building code and conforms with LEED standards.

The tour group was quite fortunate to hear from the builder himself. Talaat Elsaifi, a modest man with decades of experience in building places of worship, took the floor, so to speak, and offered details of the construction of the mosque. He explained his company's philosophy in allowing a faith community the flexibility of building when they have the money and then pausing when the money runs short, then resuming again. He spoke of the structural aspects of the mosque and the design layout of such things as the security and control room. He also touched on the earthquake-proofing measures required for such establishments.

It was very interesting to hear about these things. Typically, the most we hear about the building of a mosque is the need for one and its funding. It gave a stronger sense of connection and belonging to a mosque, which quite frankly, is on the other side of the city from where I live.

Aside from the beautiful simplicity of the interior, the mosque's exterior was quite elegant as well. It is always nice to see good taste going into something so special. Brother Noureddine also told us about the planned installation of a skylight system which draws light from the roof then disperses it throughout the upper floor.

The upper floor is intended as the main prayer space for the women and includes washrooms and ablution facilities and is equipped with two large LCD monitors to view functions occurring out of view below. To get to the upper floor you have the choice of either the stairs or an elevator that open right onto the prayer area for convenience. In the basement, the mosque has a second prayer space and an industrial kitchen equipped with everything a culinary artist could dream of, including a shawarma rotisserie. It seems the mosque has some plans to raise serious funds through in-house food sales!

After its stop at Bilal mosque the tour continued on to Maison Tucker House, a historic building built primarily of local materials. Here tour members saw sustainability upgrades in the kitchen, bathrooms, and furnace room. The exterior sported a 10 KW solar photovoltaic installation to provide energy to the building.

The tour was very uplifting, particularly since these were faith communities taking initiative in reducing the impact we have on our planet and that there was an excellent Muslim presence. It would be very exciting if, say, a Muslim organization, such as a mosque, took the lead on being a positive environmental voice in our community. It would certainly give a more significant meaning to our green moniker than simply reference to a hue.