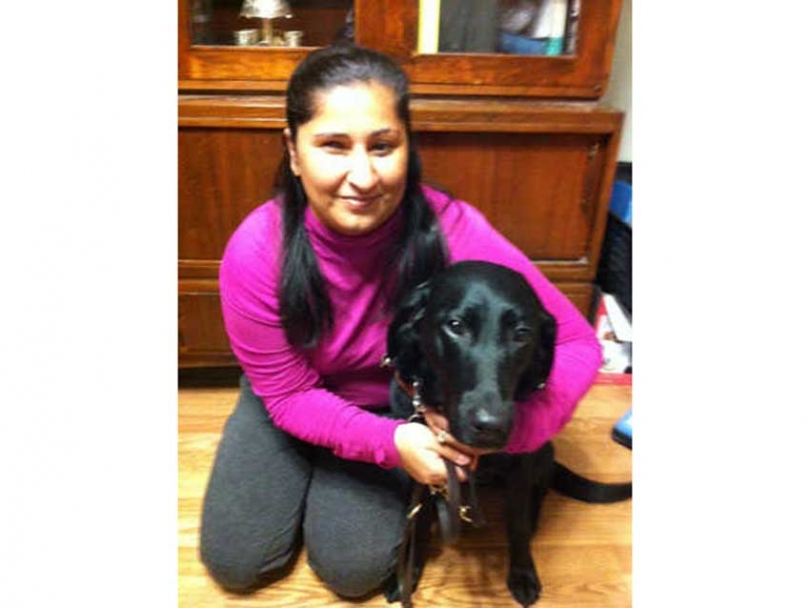 Legally blind but looking ahead and moving forward

Undeterred by what is arguably a significant hurdle to the pleasures and experiences of daily life, Arshina Kassam, a twenty-six year old Muslim of African background wakes each morning charged with her faith in God and confidence in her own ability to navigate the logistics of living life virtually blind.

Arshina, a second year Masters student in the School of Social Work at Carleton University, was born in Tanzania with a congenital cataract in her left eye that was not diagnosed till she was a year old. Her family then moved to Toronto where she embarked upon a series of surgeries to extract the diseased lens but following a detachment of her retina, she was left completely blind in her left eye by age two.

While in fourth grade, her right eye developed a rapidly progressive cataract. Mindful of the previous surgical failures her family opted to defer operative treatment. Finally, when she was only able to perceive colors and shapes, and could no longer discern print, she decided to proceed with surgery. There followed a rollercoaster ride of hope, misgivings, dashed expectations, renewed hope, and finally resignation as she underwent six major operations on her right eye, along with two unsuccessful laser interventions. For a brief period, her vision improved to the extent that she was able to read print again but this interlude was short lived, and finally she was left with permanent blindness in her right eye. Still just a teenager, Arshina uncomplainingly accepted her fate and resolved to go forward.

Numerous hospitalisations forced her to miss chunks of school time so she stayed an extra year in high school. Buoyed by the support of her parents and two brothers, she eagerly sought to lead a full life, and enjoyed activities such as figure skating, dance, swimming, karate and horseback riding.

Independence came after she moved to Ottawa on her own to begin her undergraduate degree in criminology. In 2005, she went to New Jersey to the Seeing Eye School which pairs the blind with guide dogs. Her first dog, Godiva, stayed with her for five years. As someone terrified by dogs, she ruefully recalls the fear she felt while endeavouring to bond with her -- overcoming cultural barriers to eventually groom, feed and care for Godiva, so the dog could guide her. Burned out, Godiva eventually retired and now Arshina has Kiki, a black Labrador.

With the guide dogs came independence, a sense of personal security and a greater feeling of optimism. Working with mobility specialists from the Canadian National Institute for the Blind, a registered charity, Arshina learned to navigate bus routes, intersections and unfamiliar neighbourhoods in order to attend university and job placements, to shop and to lead a normal life.

With adaptive technology, she is able to attend lectures, write exams and surf the internet. Using JAWS, a type of speech software that functions as a screen reader, she can type papers and emails and check her content by listening to the audio translation. She is a voracious reader and uses audio books and Braille to access literature.

In July 2012, Arshina was a guest speaker at a workshop organized by the Canadian Association of Muslims with Disabilities. She spoke to an audience comprised of the visually impaired, their families and service providers, along with those affected by other disabilities. At the time, she had a summer job at the CNIB Volunteer Services Program, where she helped to interview potential volunteers and counselled clients in need of social and visual support.

Musing on her life journey, Arshina describes her faith in Allah as complete and feels that her trials have made her what she is: grateful for her abilities, respectful of others and accepting of differences. Self-assured, she looks to her future as a social worker helping either victims or offenders in the criminal justice system. She hopes to make a difference in the lives of those who have known sorrow and hardship.

When asked what constitutes her biggest challenge, she is clear ”“ lack of awareness on the part of society which deems the disabled unable she feels, is the biggest obstacle to the integration of the disabled into society. She recalls with incredulity being turned down as a crisis line operator ”“ as if being sighted would have in some obscure manner helped her and also, with greater regret, being denied a job at a residential half-way house, even though Kiki would have secured her personal safety.

Despite her unwavering faith in God, Arshina is less sanguine about the Muslim community which she feels was unsupportive of her needs. Eager to attend Saturday am classes in childhood, she was denied the use of her Brailler to take notes because the clicking sound was “too noisy”. She was also denied a teaching assistant and was not permitted to use closed circuit television. Finally, hoping to attend Islamic summer camp, she was told she was a liability and refused registration. The most galling of all, she feels, was the reluctance to allow her guide dog into the mosque so she could remain independent.  Weary of struggling to educate her community, she left her mosque and now concentrates her energies on her every day battles with daily living, her education, and her search for a job.