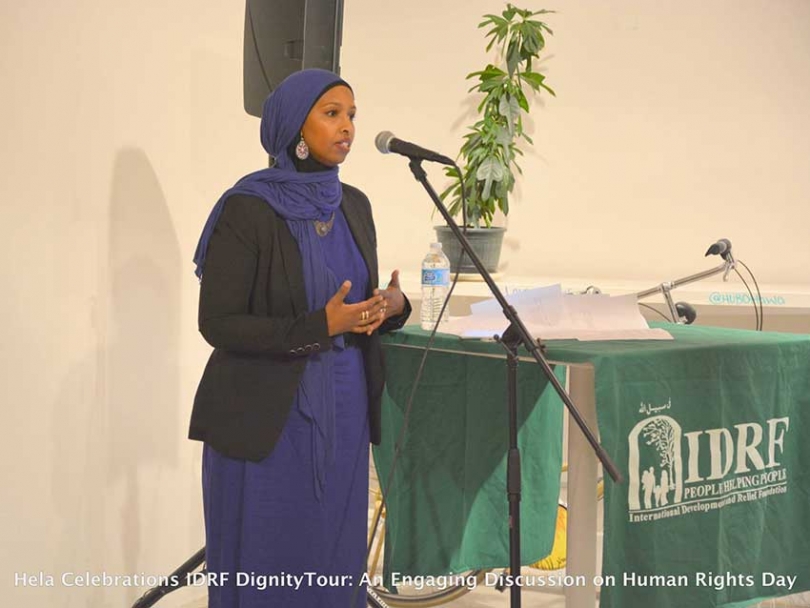 Farhia Ahmed, co-chair of the Justice for Abdirahman Coalition, speaking at the IDRF Dignity Tour in Ottawa. Hela Celebrations
24
Jan
2017

Why I Joined The Justice for Abdirahman Coalition

Farhia Ahmed, co-chair of the Justice for Abdirahman Coalition, spoke on December 10th, Human Rights Day, at the IDRF Dignity Tour in Ottawa. Muslim Link has gained permission to publish her speech today, in acknowledgement that it has been six months since the death of Abdirahman Abdi on July 24th, 2016.

Some of you may already be familiar with those first words I said, but some of you may not and so I make it a point to say those words in both languages because I feel that it is important for us to recognize each-other’s kindness and normalize different ways of seeing it, hearing it and experiencing it.

I believe that, that is what this Dignity Tour is about. Human Rights is about recognizing humanity and recognizing that while we may come from different tribes and nations we are all humans. And as any geneticist will tell you, strength and beauty come from diversity.

On that note, before I go any further, I would like to take a moment to thank and acknowledge, the kindness of my First Nations brothers and sisters on whose land we are gathered – the traditional unceded Algonquin territory.

So who the heck am I? Why am I standing here as part of Human Rights Day? Well I'm many things, I am mother, I am Somali, I am Canadian, I am Muslim. I am productivity junky, coffee addict and lover of pizza. But more recently I’ve come to be known as Farhia Ahmed, Co-Chair of the Justice for Abdirahman Coalition.

Abdirahman Abdi died on July 24th 2016 during a violent arrest by Ottawa Police Service officers. Mr. Abdi had no criminal history, and there are no indications he posed a threat to the lives or safety of the officers at whose hands he died.

The Justice for Abdirahman Coalition is a group based in the National cap region, created within days of Abdirahman’s death with the objective to obtain greater transparency, challenge racial inequity, and bring positive change in order to secure justice for the late Abdirahman Abdi and his family.

The Justice for Abdirahman Coalition asserts that fairness, transparency and accountability in our law enforcement institutions are critical to ensuring all of our safety and security.

The Coalition is supported by local and national advocacy groups and from day one we have found friends in all levels of government.

Friends, I was asked to speak to you briefly about the Coalition and its work and how I got involved. Will certainly do that – but I want share a reflection with you first.

When I sat down to try to put pen to paper about why I got involved – there were so many reasons, but what I kept coming back to was that I just felt compelled. Beyond reasoning just compelled.

My dad once said to me: just care deeply about the little things and when it comes to the big things your heart will direct your feet to move. When you train your heart and mind to care about the little things…you instinctively start caring about progressively bigger things. Growing up I was taught that a smile is charity – but I was like naw, a smile can’t buy me nothing! But I see now that by giving that extra dollar donation at the grocery store, caring for that your neighbors left their car lights on will inevitably lead to be ready to respond to the big issues when they hit YOUR door step.

On July 24th 2016, that big issue landed literally on the door steps of 55 Hilda street. That was Sunday. Now I am a mom, so sometimes I live in a necessary bubble. Sundays are usually that bubble – On July 24 th I was most likely busy with dishes, laundry, meal prep for the following week…So I hadn’t heard the news until the next day when a friend called me frantically, asking if it was the brother of a friend of ours – I was like who, what slow down!

So I stopped to finally see, what the big deal was….to my horror I was met with images and a video of Abdirahman bloodied and lying motionless on the ground. Reading the narratives around his story made me first confused, shocked, and then just even more confused. How could this happen, why did this happen?

I was not the only person that felt this way. On July 26th, the Somali community organized a private meeting in the gymnasium of a local school. Over 400 people showed up that night…to mourn the loss of our brother.

What was interesting is that one of the organizers after speaking emotionally about the issue, said, "Now we have come to grieve, but there must also be action! For all those who are interested in doing something about this – stay behind…"

That night, I stayed behind…

Friends, this campaign was born out of shock and frustration. Although initially it was a few Somali community members who came together, it very quickly became a national campaign for justice. Students, labour unions, human rights activists, business owners, scholars from all races, faiths, and political stripes have supported us in our desire for justice.

Since the launch of this campaign, we have been busy to say the least. Upon blessings from the Abdi family to do our work, our first task was a media and pr campaign to manage the funeral and media and attention the story was getting.

There were non-stop phone calls from the press so we held a national press conference in which we presented a set of recommendations to all levels of government.  These include, among others, a call for a more transparent and independent civilian oversight and accountability of police, collection and reporting of race-based data on police encounters with civilians, better training for dealing with individuals with mental health issues, and requiring officers to have body and vehicle cameras.

Second, we have launched a political campaign to bring these recommendations to all three levels of government. We have been in talks with the Chief of Police, the Mayor and Provincial Minister responsible for anti-racism.

I am proud to share with you that we are already beginning to see positive movement on some of the recommendations we’ve put forward. For example, the Ottawa Police Service will now reverse an earlier decision on body cameras and will in fact begin implementing a pilot project on the technology right here in Ottawa.

After initial discussions with the Mayor, we were pleased that he convened all city managers and officials to a meeting with us. Since this meeting we have been able to open conversation and potential areas of action on peripheral issues such as mental health, employment and criminal justice.

Also positive was Premier Wynne’s comments that she wants the Special Investigations Unit (SIU) report into Abdirahman’s death to be made public. Concerning this, we hold our breath in a cautious 'wait and see' optimism.

Sometimes timing is of the essence. In April 2016 the province of Ontario started undertaking a review of its three police oversight bodies: the Special investigations Unit (SIU), the Ontario Civilian Police Commission and the Office of the Independent Police Review Director (OIPRD). The Honourable Justice Michael H. Tulloch of the Ontario Court of Appeal was appointed by the province to act as an Independent Reviewer of these bodies. Of course we took the opportunity to request a meeting with Justice Tulloch and participated in two consultation sessions with his review team. Moreover we submitted our recommendations in writing.

Third, we have been leading a strong community engagement strategy. We have been working in parallel to other efforts around town. For example, at a community conference on race and discrimination, a community healing event with the help of City council Jeff Leiper, Community health centres and community associations and local interest groups.

The Coalition and its work is not just about the death of Abdirahman. If it was, his death would be in vain. Our work is about restoring dignity and faith in our law enforcement and the various institutions we pay our tax dollars to. But most importantly, it’s about humanity.

I want to thank you all for being here on your Saturday night to take part in this Human Rights Day event. I want to especially thank, the organizers of this event for giving us the opportunity to convene and speak about and reflect on this subject.

I want to conclude with a verse from the Quran that is near and dear to me. This verse also adorns the entrance wall of the Harvard school of law.

“O you who believe! Stand out firmly for justice, as witnesses to God, even though it be against yourselves, or your parents, or your kin, be they rich or poor…” chp 4 vs 135.

You see, often times what gets in the way of justice and equity - which are human rights - are personal bias and personal interest which is present in all of us. This verse defines justice as being so crucial that we must defend it even if it's against ourselves.