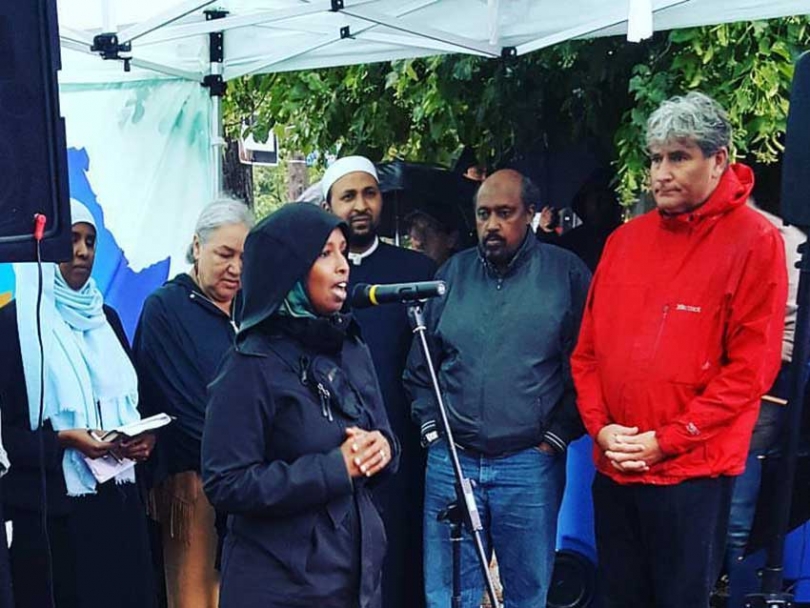 Justice for Abdirahman co-chair Farhia Ahmed speaking on July 24, 2017, the one year anniversary of the death of Abdirahman Abdi
02
Aug
2017

Farhia Ahmed is co-chair of the Justice for Abdirahman Coalition, a mother of four, a productivity junky and lover of coffee. Here she reflects on the death on Abdirahman Abdi and its impact on Ottawa over the past year.

It was a hot and humid Tuesday evening on July 26, 2016. Emotions were running high in a standing room only event at a school gymnasium in west end Ottawa. The Somali community had gathered that evening to mourn and try to make sense of the shocking news concerning the violent death of a fellow community member over the weekend.

July 24, 2016 was a Sunday. As a mother of four young children, Sundays usually mean I am busy with dishes, laundry and meal prep for the following week, so I was busy in my own “mommy” bubble. It was not until the next day that I heard the news, when a friend called me frantically asking if I had heard what happened.

I had no clue what she was talking about, but to my horror, I was met with graphic images and a video of Abdirahman Abdi bloodied and lying motionless on the ground. Abdirahman Abdi was a 37 year old Somali-Canadian with mental health issues who died at the hands of an Ottawa police officer on July 24, 2016. Ottawa Police were responding to a call from a local Bridgehead Café in Hintonburg. It was alleged that there was a man causing a disturbance and that a woman was sexually assaulted. When Police arrived, Abdirahman was pepper sprayed and then pursued on foot to the footsteps of his apartment building where he was violently beaten and eventually died.

With the exception of a few witnesses at the coffee shop that morning, none of us know exactly what had transpired. According to the July 12, 2017 announcement by the Ontario Court of Justice, the truth is not scheduled to come out until 2019 when the trial is scheduled to begin.

While I may not know what happened that day, I feel strongly that when a woman, or anyone for that matter, says they have been sexually assaulted, they must be taken seriously!

What I do know is that regardless of what did happen, death was not the solution. The police horribly failed everyone on that fateful day.

As I continued to read the narratives around this story, I felt ill to my stomach. I was shocked, confused and traumatized.

I was not the only person that felt this way. Over 400 people showed up to that school gymnasium. I was one of them. At first I was angry, but as I looked around to see my fellow community members, I felt comfort. Immediately following this event, I, along with my children, attended a vigil for Abdirahman at Somerset Square in Ottawa. I was in awe at how many people were there. I was especially comforted by the diversity of people who attended. In this sombre scene, I could not help but feel overwhelmed with pride in my city. My young children, although unaware of the magnitude of the tragedy, got to witness a crowd of people from all walks of life mourning the loss of a community member. I am a black African woman, but my children are of mixed heritage. It is important for me that they see diversity as a beautiful thing. This vigil was indeed beautiful.

July 24 marked one year since the loss of a son, a brother, an uncle, a citizen of Ottawa and a member of our Canadian family. Just like all of us, Abdirahman had thoughts, feelings, ambitions, fears, and a need for protection and security.  One year ago today, these things were all taken away from him in the most unimaginable way. The very people who were supposed to protect him stole his future.

As Ghandi famously stated, “a nation's greatness is measured by how it treats its weakest members”. Abdirahman Abdi represented the intersections of the most vulnerable in our community. If we stand idle in the face of this, then what happened to Abdirahman is a shame on us all. As devastating as Abdirhaman’s death was, it was not in vain. Abdirhaman’s death has caused an awakening - a strong call for Justice has emerged.

I never knew Abdirhaman. I never saw him, I never met him. But when I heard what had happened to him, I felt an overwhelming responsibility to act. For the past 12 months I have been a part of the Justice for Abdirahman Coaltion. The Justice for Abdirahman Coalition is a group formed within days of Abdirahman’s death with the objectives of obtaining greater transparency, challenging racial inequity, increasing support for mental health needs and bringing positive change in our law enforcement institutions. The core group that forms the Coalition consists of an extremely dedicated multigenerational team with professional backgrounds in policy and program management, education, mental health, public relations, criminal justice, community development and corporate governance. We have worked tirelessly to rebuild community ties and push for policy and legislative reforms. In addition to late nights writing or researching for projects on the go, we have had the pleasure to get to know the Abdi family. We have shared tears with them, but more importantly we have laughed really hard with them. They have welcomed us into their home, we have shared meals together and have enjoyed “shah and sheko”, as we say in my language, kick’n it with tea and shooting the breeze.

You would think that a family that has endured so much pain would be full of anger and resentment. Yes they are hurt and frustrated and they are demanding justice. But this family is something else. In the whirlwind of their individual lives, they have made the time to make us, the Coalition and the community at large, feel good!

In my faith, we believe all things happen for a reason. This whole experience has taught me that even in tragedy there is wisdom that is not always, at first, apparent. I have come to see why the Abdi family is so special. This family’s resilience, strength and patience is unmatched. Even after a year waiting for justice, and recently learning they must wait another two years before a trial, they remain resolute, firm and patient. They are an incredibly loving family. Their one and only request of us as a team supporting them has been to stay united and strong. To spread love and not hatred. And to bring people together. From the Abdi family, I have learned first-hand that you can truly rise above hate and anger.