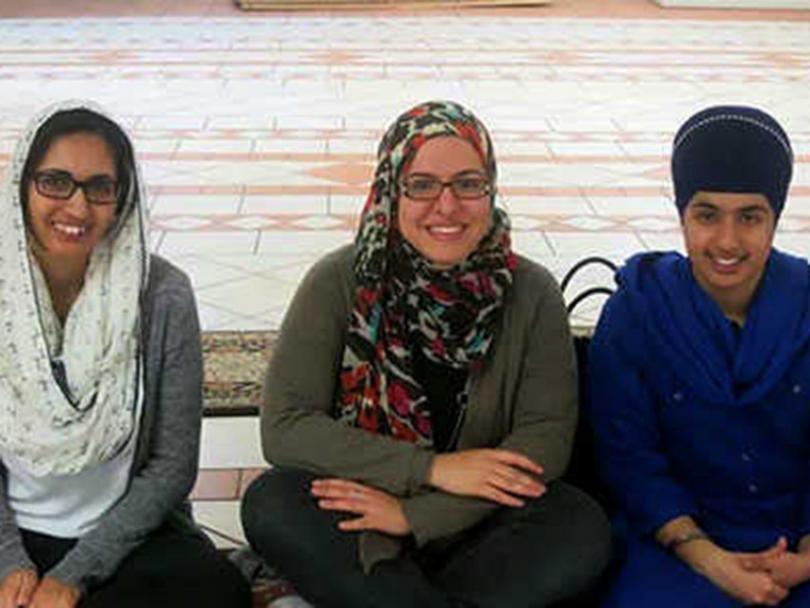 Sama (Centre) with friends Carla and Amanjot learning about turbans, which are also worn by Sikh women at a Sikh temple in Montreal.
12
January
2014

The “Support Another” Campaign Promoting Religious Freedom in Quebec

A campaign started by three Montreal Muslim women in opposition to the Quebec Charter of Values, Support Another calls on Canadians to “walk in the footsteps of a visible minority” on January 13th, by wearing an article of religious clothing for a day.

“Support Another is a campaign against the Charter of Values with the purpose of giving all Canadian citizens an equal chance to stand up together for our freedom,” explains Yusr Al-Obaidy, one of the campaign organizers. “We are encouraging everyone to wear one of the four religious symbols that the PQ wants to ban in the public sector in order to eliminate the words ”˜visible minority' for one day.”

The idea for the campaign arose when 27-year-old Montreal resident Sama Al-Obaidy was attacked in a Montreal subway car by a woman who verbally abused her and tried to physically remove Ms. Al-Obaidy's hijab. Although this was the first physical assault she experienced, she says she has been verbally attacked numerous times since the introduction of the Charter. Upon sharing her story with others, she came to learn of many other incidents of verbal and physical attacks against visible minorities in Quebec. Together with her sister Yusr and best friend Nariman El-Doraini, the trio launched Support Another to raise awareness and to denounce the Charter of Values.

The Quebec Charter of Values, known as Bill 60, was tabled in the Quebec National Assembly in November by the Parti Québécois government. The Bill seeks to prohibit public sector workers, including doctors, teachers and civil servants, from wearing religious symbols such as hijabs, turbans, kippahs and conspicuous crucifixes. Numerous Montreal area organizations, universities, hospitals, school boards, and municipalities have formally stated their opposition to the Bill, with many declaring they will be defying the Bill if it passes into law.

Thus far, Support Another organizers say the campaign has generated highly positive support from across the country. In order to encourage the general public to participate, their Facebook page offers tutorial videos demonstrating how to wear a hijab and how tie a turban.

48 year-old-Montrealer Joseph Ayoub is one of the participants who will be partaking in the campaign to show his opposition to the Bill he says he was “disgusted” by.

“It's incredible that today, in a day and age when we should be breaking down walls, some people are still trying to put them up,” he says. “Ignorance of other cultures is very dangerous and hurtful. We should be exploring other cultures and experience what they bring to the human experience. I am not a religious person, but I do strongly believe in a person's right to religious expression.”

According to the Muslim Council of Montreal, incidents like the one experienced by Al-Obaidy are becoming more common in Quebec. At a press conference held in November, the council's president Salam Elmenyawi stated that the province has seen a surge in Islamophobia, citing that between September 15 and October 15 2013, 117 complaints of verbal and physical abuse were made, compared to 25 complaints for the previous nine months combined. Muslim women were victims for the majority of attacks, filing 114 out of the total 117 complaints.

For Concordia University history professor Nora Jaffary, deciding to wear the hijab to work was a means for her to personally protest the charter and show her solidarity with the Muslim women being targeted in the wake of the Charter's introduction.

“This is a violation of freedom of religion and freedom of expression, both of which are protected by federal and provincial law,” she explained, “I think we are living in a period in Quebec of augmented hostility against Muslims and this Charter fosters and legitimizes a culture of exclusion towards Muslims and others that I find disturbing.”

Professor Jaffary says she has received many positive letters of support from within the university, across the country, and also from abroad. She plans to continue wearing the hijab to work as a protest when universities resume classes in January, as well as participating in the January 13th campaign.

For Al-Obaiday, she hopes for the campaign to be an opportunity to turn the negative Charter debate into a positive unifying voice of reason, to not only prevent attacks such as the one she experienced, but also to deter the Bill from passing.

For more information about Support Another, visit www.supportanother.ca