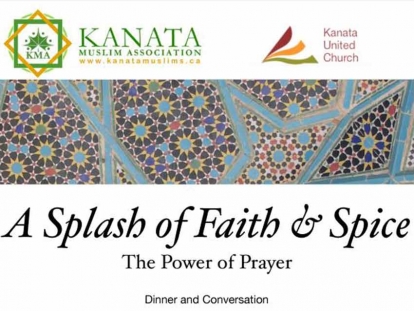 The Kanata Muslim Association (KMA) has partnered with the Kanata United Church (KUC) to organize their third annual joint fundraising dinner for a community cause. This year they have partnered to raise funds for the Caldwell Family Centre, that runs programs for families in the Caldwell-Carlington area community, including one of the busiest food banks in the city of Ottawa. 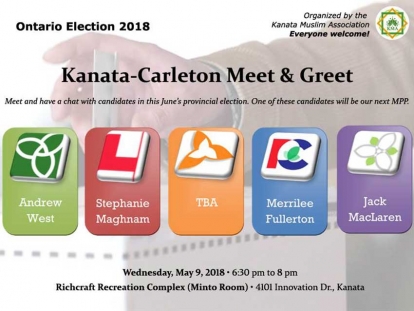 The Kanata Muslim Association is holding a Meet & Greet with candidates running in the 2018 Ontario Provincial Election in the provincial electoral district of Kanata-Carleton.

The Meet & Greet is taking place Wednesday, May 9 at 6:30 pm at the Richcraft Recreation Complex in Kanata, Ontario. 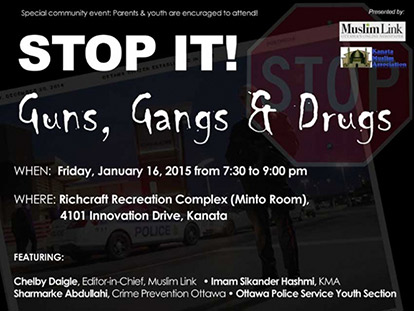 In the wake of the shooting at Tanger Outlets on Boxing Day 2014 in Kanata, Imam Sikander Hashmi reached out to Muslim Link for help in organizing an information session about gangs in Ottawa. For many in the Kanata Muslim Association (KMA), this event brought home the reality of gangs in Ottawa for the first time. It also disturbed them because both the perpetrator and the victim were from Muslim backgrounds. However, for Muslims in other parts of Ottawa, in particular Ottawa-West, Ottawa-East, and Ottawa-South, the presence of gangs, and the disproportionate number of young Muslim men involved in them, has been a serious concern for years.

In a joint effort by KMA and Muslim Link, the Stop It: Gangs, Guns, and Drugs Information Session took place on January 16th 2015. Staff Sergeant Andrew Buchan from the Ottawa Police Service's Youth Section and Sharmaarke Abdullahi from Crime Prevention Ottawa (CPO) were invited to speak about their organization's efforts to address Ottawa's gang issue. 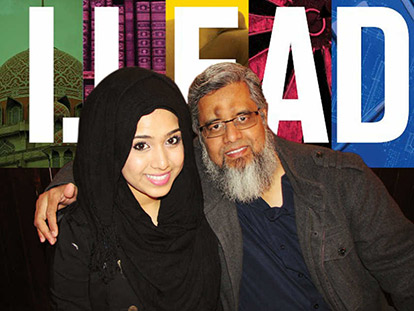 A Father and Daughter Review I.LEAD

On May 17th, thousands of Muslims attended the second annual I.LEAD Conference. Muslim Link chose to interview a father and daughter to get an intergenerational perspective on the conference whose theme this year was “Muslim Youth Identity”. 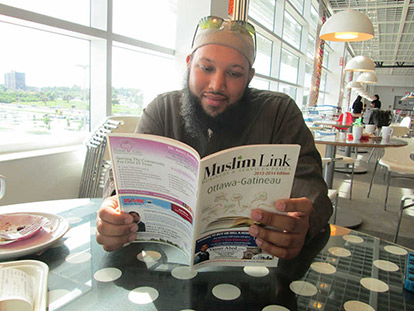 Imam Sikander Hashmi is the new imam in Kanata. Born and raised in Montreal, Imam Sikander is also a journalism graduate from Concordia University and a happily married father with two energetic children. He has written for the Toronto Star and Montreal Gazette, and has worked as an Imam in Kingston. 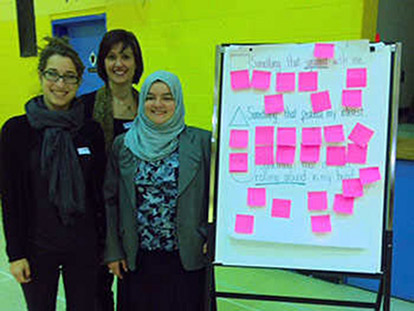 It's 8:30am on a blustery cold Sunday morning, a time most people spend in bed with a cup of coffee. Not so for Lila Hammouda, lifelong educator and mother of four. As an Ontario certified elementary teacher at a local public school, Lila is passionate about education. She also serves as the Principal of Kanata Muslim Association's Hikmah School, a weekend school teaching language and faith.

Today is an important day as her vision of creating collaboration between the weekend school community and the larger Ottawa educational community is finally taking place. It's a day of professional development workshops for weekend educators. 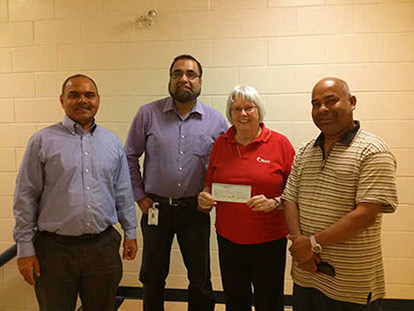 The Kanata Muslim Association (KMA) presented a cheque for $2500 to City Councillor Marianne Wilkinson to support the construction of the Richcraft Recreation Complex. Located in Kanata North, near the Terry Fox Drive and March Road Intersection, the Richcraft Recreation Complex will be an energy efficient, high quality, fitness, recreation and aquatic facility. The City of Ottawa will name the kitchen in the complex after KMA.

Great food and good cheer were on offer at an inter-faith potluck held in Kanata on February 26.

Well-attended by over 25 members of the Kanata Muslim Association (KMA) and a comparable number from the St. John's Anglican Church, the first-time event was a huge success.

Members of the KMA had been renting the St. John's church hall for several years for Friday and Ramadan prayers. But when the numbers got too big, the KMA had to move their prayers to the Kanata Recreation Centre.  The potluck was a way for the KMA and the church members to foster and grow the relationship that had already started to blossom from that earlier relationship, explained Amira Elghawaby, a member of the Kanata Sisters women's group who coordinated the event on behalf of the KMA.

What do you get when you combine Islam, Hinduism, and Christianity? How about Yoga for Muslims at a church!

Since February of this year, a group of Muslim women have been attending a specially designed -- and halal (Islamically permissible) -- version of Yoga classes intended to promote basic physical health and release stress inside the hall of a local church.

Afreen Shaikh, a mother of three, and an active community member organizes the weekly classes and spoke with The Muslim Link.