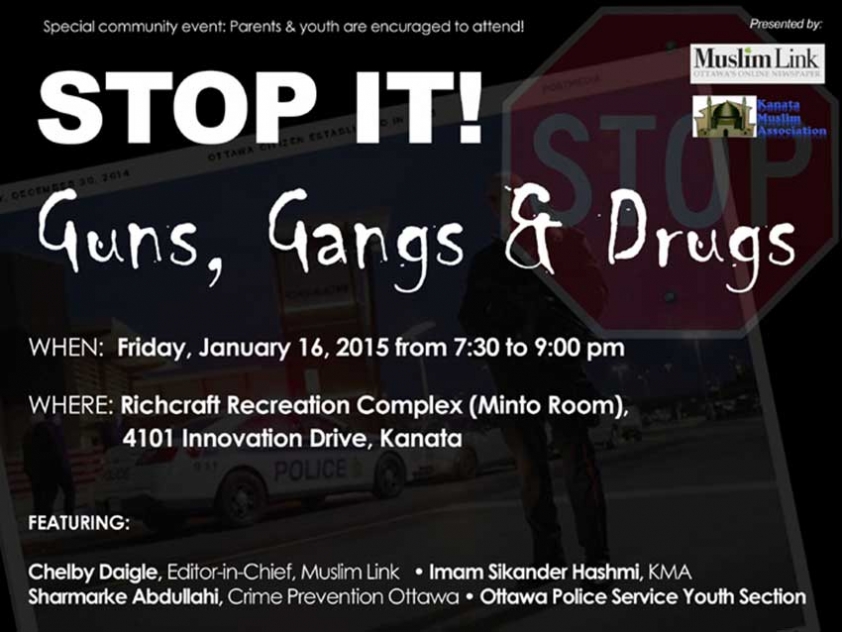 In the wake of the shooting at Tanger Outlets on Boxing Day 2014 in Kanata, Imam Sikander Hashmi reached out to Muslim Link for help in organizing an information session about gangs in Ottawa. For many in the Kanata Muslim Association (KMA), this event brought home the reality of gangs in Ottawa for the first time. It also disturbed them because both the perpetrator and the victim were from Muslim backgrounds. However, for Muslims in other parts of Ottawa, in particular Ottawa-West, Ottawa-East, and Ottawa-South, the presence of gangs, and the disproportionate number of young Muslim men involved in them, has been a serious concern for years.

In a joint effort by KMA and Muslim Link, the Stop It: Gangs, Guns, and Drugs Information Session took place on January 16th 2015. Staff Sergeant Andrew Buchan from the Ottawa Police Service's Youth Section and Sharmaarke Abdullahi from Crime Prevention Ottawa (CPO) were invited to speak about their organization's efforts to address Ottawa's gang issue.

I also spoke at the event about my workshops educating parents about how to build resilience within their children between the ages of 6 to 12 so that they can avoid the temptations of gangs. I grew up in low-income housing in Ottawa's West End so I have always been surrounded by a certain level of criminal activity. I remember when my neighbourhood was predominantly White and there was the same level of criminal activity as there is today now that my neighbourhood has a significant Muslim population from a diversity of backgrounds. Each new generation in the community can easily get tempted to engage in criminal activity for one simple reason-poverty. So, as I explained to those in attendance at the session, we are seeing young Muslims getting involved in gang-related criminal activity, like drug-dealing, because a significant portion of Ottawa's Muslim community is living in poverty with large concentrations in low-income communities where it is easy to get recruited into gangs and it is sometimes hard to have hope that there is a better way of life. Hope for a better life is key, which is why issues like access to quality education (see Awakening the Spirit of Somali Youth 2015 for more on the issue of education) and access to role models, in particular positive male role models for young Muslim men, is key for building resilience against the temptations of gang activity.

Many Muslims living in poverty in Ottawa come from refugee backgrounds. I explained that the Muslim refugee experience is often far more difficult than that of Muslim immigrants, and Muslim refugee families require a lot of ongoing community support to overcome the trauma they have experienced and to build a new life in Canada, support which, I stated, I hoped to see more Muslims who are better settled offering to them.

Sharmaarke Abdullahi, whose work as the coordinator of the Somali Youth Support Project and as the coordinator of the Michele Heights Community House, a community which has seen its share of violent criminal activity, has given him insights into the vulnerabilities of Muslim youth when it comes to gang activity. Abdullahi presented on Ottawa's Gang Strategy which has been developed by the City of Ottawa and the Ottawa Police Service along with a number of community partners. He explained how the city is not only looking at tackling gain activity through enforcement but also by preventing youth from getting involved in gangs and supporting gang members trying to exit gang life, particularly those coming out of prison who may feel they have no alternative to make money other than gangs due to having a criminal record.

Staff Sergeant Andrew Buchan discussed the work of the Ottawa Police Service's Youth Section in working directly with youth and families in order to prevent youth who have come into negative contact with the law from continuing to go down that path. This includes youth who are involved with drugs. He explored the issue of drug use, which he explained was a reality among youth, no matter their income, religion, or family background, and the supports offered to students by Rideauwood Addiction & Family Services. The issue of drug use as a reality that even Muslim youth in Kanata face seemed to really resonate with those in attendance, particularly the youth present. Sharmaarke Abdullahi recommended that those in attendance look up a recent report on drug use among Ottawa youth in order to get a better understanding of the problem. Staff Sergeant Buchan recommended that parents read Stepping Stones: A Resource on Youth Development, a guide developed by the Government of Ontario to help parents navigate the challenges youth face as they grow up facing realities which, particularly due to technology, often their parents never had to face.

Overall, it was a very successful session which left those in attendance with a better sense of what the current gang situation is in Ottawa and ideas on how they might be able to contribute to helping Muslim youth who are at risk of gang activity. It also left many of those in attendance more aware of the services and supports that the Ottawa Police has to offer youth and their families.

Imam Sikander Hashmi moderated the session, highlighting the importance of Muslim parents taking the time to get to know their children and discuss what is happening in their lives so that, when they are older, it would be easier for youth to discuss some of the challenges they might be facing with their parents. He also discussed how sometimes when youth are in conflict with their families, another adult who the youth connects with could be sought out to help speak to them.

Stepping Stones: A Resource on Youth Development (Government of Ontario)