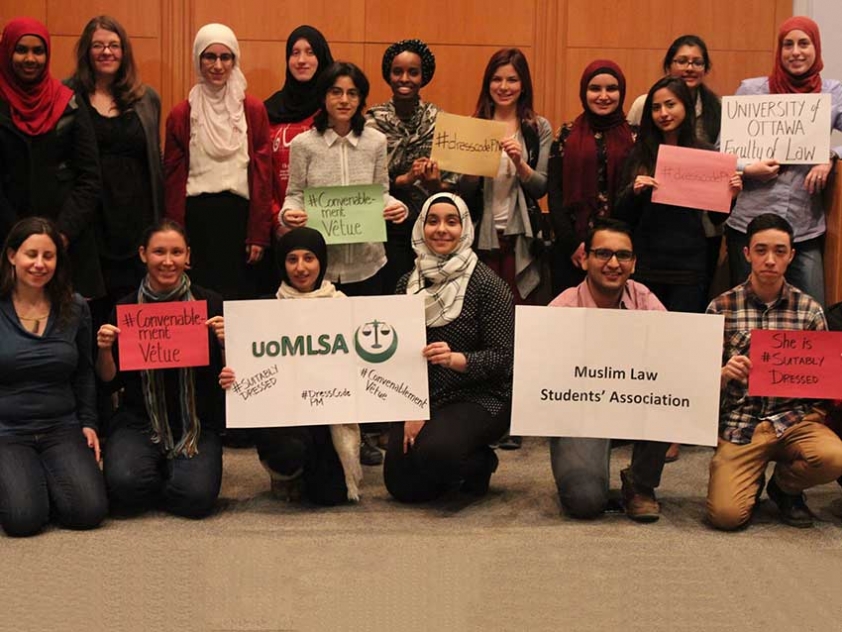 University of Ottawa Law Students take photos in solidarity with veiled Muslim women who are being denied services in Canada. Courtesy of MLSA
31
Mar
2015

On Wednesday, March 18th, students at the University of Ottawa gathered to take photos and to speak out against discrimination against Muslim women who veil in Canada. The action was initiated by Civil Law student Hina Ansari and led by fellow Civil Law student Assma Basalamah and Common Law student Aruba Mustafa, who is also the president of the university’s Muslim Law Students’ Association (MLSA).

The students were inspired by former University of Ottawa MLSA president and practicing lawyer Amna Qureshi, whose Twitter photo popularized the hashtag #SuitablyDressed as a way of expressing outrage against the treatment of Rania El-Alloul, who was not permitted to have her case heard in a Quebec courtroom because she was wearing hijab.

At the event, which was attended by over 40 students, both Muslim and non-Muslim, Basalamah and Ansari presented the following statement:

On February 24, 2015, Rania El-Alloul appeared before a Quebec court. The presiding judge refused to hear her testimony on the grounds that her headscarf (hijab) did not meet the requirements of court decorum; in other words, according to Justice Marengo, Ms. El-Alloul was not‪#‎SuitablyDressed.

It’s shocking that justice Morengo equated sunglasses and hats to the hijab, when only one of these things is constitutionally protected.

The University of Ottawa's Muslim Law Student's Association (MLSA) is here today to stand in solidarity with Rania El-Alloul. What happened to her is not an isolated event it is a glaring example of a trend, a trend of marginalizing women from accessing judicial and democratic processes.

Only a week ago, our Prime Minister made outrageous comments regarding his fight against a woman wanting to take her citizenship oath while wearing the niqab. In Parliament, he said and I quote:

“Why would Canadians, contrary to our own values, embrace a practice […] that is not transparent, that is not open and, frankly, is rooted in a culture that is anti-women?”

He also added in a speech he made in Quebec:

"Frankly, if you're not willing to show your face in a ceremony that you're joining the best country in the world, then frankly, if you don't like that or don't want to do that, stay the hell where you came from, and I think most Canadians feel the same."

These ‘frank’ remarks are a display of an unfortunate growing sentiment, which is important to counter by showcasing our disappointment in our governement’s lack of respect for a woman’s right to choose what she wears.

In the same vein, as law students, we would like to emphasize our outrage and disappointment in justice Morengo’s utter disregard for both guaranteed procedural rights and the rule of law.

Following this event, we will be writing a letter to the Conseil de la magistrature (the over sight body) and justice Morengo pressing them to apologize for denying Rania El Alloull a hearing.

Aruba Mustafa feels that it is important for law students to remain vigilant in regards to the ongoing limitations being placed on veiled Muslim women in accessing services in Canada. “Judge Eliana Marengo’s refusal to hear Rania El-Alloul’s case, because Ms. El-Alloul was wearing a hijab, is not an isolated case of what seems like a knee-jerk reaction of a judge who is unfamiliar with the Canadian Charter of Rights,” Mustafa explained, “Instead, the incident is a part of a larger trend of marginalizing Muslim women from accessing democratic and legal procedures championed by the current Government of Canada. Judge Marengo must face some consequence for this act of discrimination.”

Rania El Alloul is now working with a human rights lawyer to demand clarity on what actual legal restrictions there are on wearing religious attire in Quebec courtrooms. The National Council of Canadian Muslims (NCCM) is supporting Rania El-Alloul and is coordinating her legal case with several lawyers, including renowned human rights lawyer Julius Grey. The NCCM has set up a separate account to accept donations to her legal fund. To find out more, visit www.nccm.ca or email This email address is being protected from spambots. You need JavaScript enabled to view it.