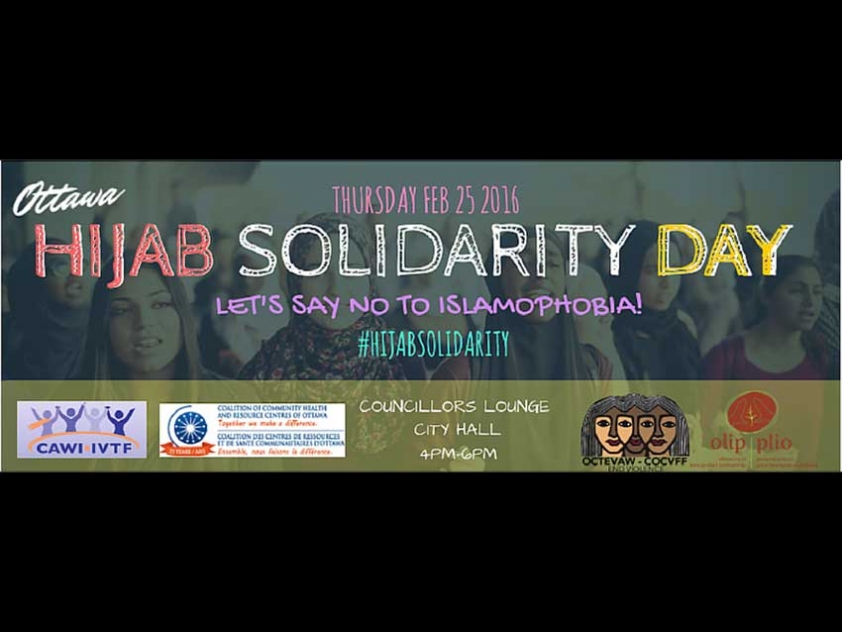 The City for All Women Initiative (CAWI), in partnership with the Coalition of Community Health and Resource Centres, the Ottawa Local Immigration Partnership (OLIP), and the Ottawa Coalition to End Violence against Women (OCTEVAW), are holding Ottawa Hijab Solidarity Day on Thursday, February 25th, from 4pm to 6pm at the City of Ottawa, Councillors’ Lounge, Second Floor.

Ottawa’s Chief of Police Charles Bordeleau, along with a number of other dynamic speakers and performers, will be participating. CAWI will also be running a social media campaign with #hijabsolidarity on Feb. 25th aimed at challenging Islamophobia and stereotypes about Muslim women who veil, while showcasing the work Muslim women are doing to challenge violence against women within Muslim communities, Canada, and around the world.

The idea for the event grew out of the escalation in harassment against visibly Muslim women over the last few months in Ottawa, an escalation which even police services have recognized.

The backlash against the event, which includes a planned protest, has actually helped to highlight just why such an event is needed. If mention of the hijab can trigger such an outpouring of outrage and statements equating the wearing of the veil by any Muslim woman with her support for everything from repressive laws in Iran and Saudi Arabia, to ISIS and the Taliban, it is now clear to many people just why Muslim women who veil are facing the discrimination and violence they do in Ottawa.

City for All Women Initiative (CAWI) has a long history of working with Muslim women in Ottawa who are inspiring and dynamic leaders in their respective communities. The most famous graduate of CAWI is

Or look at some of the speakers and performers that CAWI has organized to participate in Ottawa Hijab Solidarity Day.

, like that of many others, is a direct affront to the Taliban and their ilk, she, like many of her colleagues, lives with the spectre of retaliatory violence from these groups. . She will be performing at OCTEVAW's International Women's Day event on March 8.

The belief and constant insistence that all Muslim women who veil are either helpless victims of oppression or acolytes of an "Islamist" ideology that hates freedom of choice, social equality and wants to impose "Sharia Law" everywhere doesn’t account for women like these. And that is why this hatred and ignorance needs to be challenged.

Women like Fartuun, Sadiqa, and Roua don’t need to have to deal with being held collectively guilty for every terrible thing individuals, political parties, states and terrorist groups have done in the name of Islam, nor do they need to face verbal and physical assaults motivated by Islamophobia because, frankly, they are busy working to make Canada and their homelands a safer place for women.

On February 25th, consider showing your solidarity for women like these and others in our city by attending Ottawa Hijab Solidarity Day or following and sharing CAWI's posts with #hijabsolidarity.

Note to people leaving comments: If you plan on leaving hateful and ignorant comments on this post, you are very welcome as they just continue to help build support for this event from individuals, groups and organizations that had not been involved before because they did not understand why it was so important. You are helping them understand why it is important so Thank You.