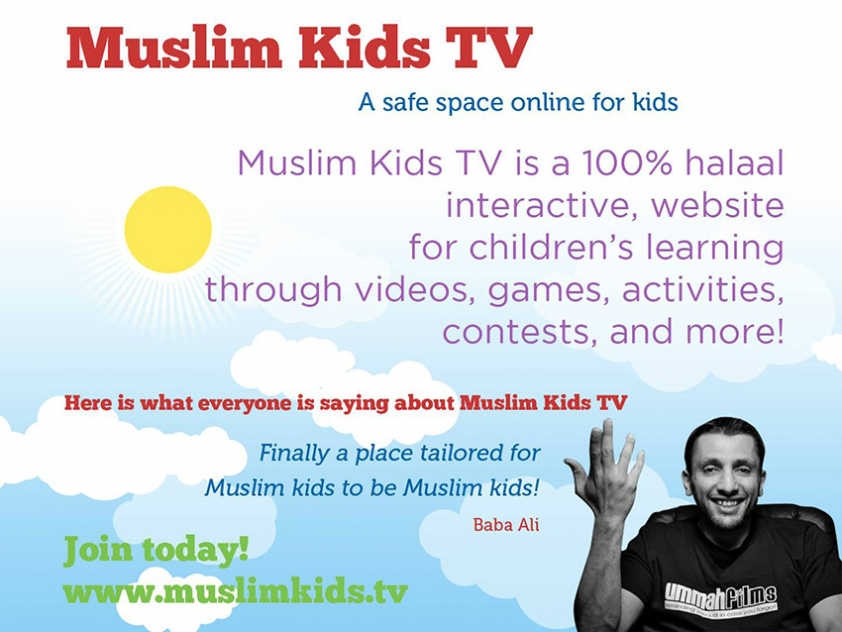 Like many parents, Michael Milo and Flordeliza Dayrit were often disappointed with the quality and lack of Islamic television entertainment for their children.

Even during a brief stint working in the Muslim world, the pickings were slim.

“Our kids wanted to watch Tom and Jerry,” remembered Dayrit with a laugh. “As a parent, you watch it and are surprised with all the violence.”

So the husband and wife production team, based in Saskatoon with their four children, decided to produce the kind of programming children would enjoy and which would reinforce faith teachings.

In 2008, they produced the hugely popular Hurray for Baba Ali series and made a variety of other programs totaling 170 episodes.

While a few channels in the Gulf and North Africa purchased their programming, Milo said that many Islamic broadcasters weren’t spending much money on production and weren’t interested in developing shows that children will enjoy. The couple had to figure out how to get their shows to more families.

“We knew the community here wouldn't have the capacity to support a full-time channel, so we thought we could deliver the content over the Internet and we spent quite a bit of time to think of how to make it sustainable.”

The result? A subscription site launched in March, MuslimKidsTV. For $9.99 a month, or $39.99 yearly, children from ages 4 – 12 have an interactive and exciting platform of games, videos, and blogs at their fingertips. They can even upload their own content and connect with other children.

“Yes, there are resources available in the mainstream, like on YouTube,” explained Dayrit. “But when you look at YouTube, there are so many inappropriate ads. We have friends that we were talking to recently who are non-Muslims and they were telling us they want to subscribe because they understand the philosophy we have and they want that for their children as well.”

So far, approximately a thousand families have signed up to the site. The aim is to have 15,000 subscribers worldwide.

“Alhamdullilah, our community is maturing and my opinion is that with that maturation there's a lot more cultural development going on and it is a lot more common now that people are going into the creative fields in the community. We’ve been in the profession for over thirty years and we know what quality is and we know what work goes into making products that are competitive with the mainstream. We also have strong relationships with very good artists in this community,” said Milo, mentioning Zain Bhikha, Ali Ardekani (aka Baba Ali), Boonaa Mohammed, and Dawud Wharnsby. Wharnsby has collaborated extensively with the production company, including as the host of the well-received documentary A New Life in a New Land.

“We have shown that we do have professional work and we have the talent pool that can make it happen. The success is really going to count on our ability to properly market it, and put the onus on the community. Yes, we are going to have some growing pains, it is not going to be comparable with million-dollar Hollywood films, but we're never going to get there if we cannot come on board with a $39 a year subscription,” pointed out Milo. “We hope that we will be able to get people to invest in this; it is a wide open market, we need a platform for education and entertainment.”

Currently, the couple is also running a crowdfunding campaign to raise money to create two new series: one featuring stories of the Prophets, and the other a series of animated vignettes based on Wharnsby’s book and CD, A Picnic of Poems.

Dayrit acknowledged that they haven’t found any female performers. “As a woman and a mother, we play a really big role in developing resources for our children, and we are on the lookout for those talents. We want to be representative.”

“As converts, we may have more of a sense of urgency about the need for MKTV. We do not have family that we can rely upon to help educate our children in Islam,” explained Milo. “Because we were for the most part raised in North America we come from the educational perspective of the West. I think this helps us to relate to what the children and families here are looking for from an Islamic educational/entertainment offering.”

The project has already opened the couple’s eyes to a general neglect of the needs of children.

“We realized how little attention children get in our communities. We find the adults are serving themselves all the time, and there are youth based projects. But at least here in Western Canada, there isn’t much for young children. Islamic schools serve such a minority of children. We would like to see children be much more prominent on the agenda, overall. They are the future, we tend to neglect them and hope that when they grow up that they will get involved.”

The couple hope their channel will open up other doors.

“MuslimKidsTV is just the beginning. We are looking beyond that: we want to offer workshops, we want to offer live theatre, and we want to make movies. I hope the Muslim community can look past what is there and imagine the possibilities of what could be there. We have big dreams.”