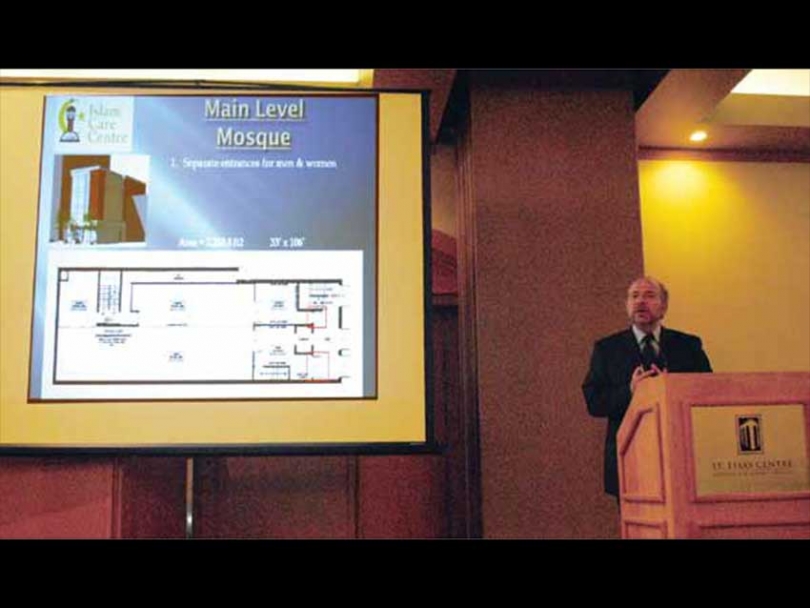 One of Ottawa's most popular Muslim prayer spaces has turned to the community for help.

Islam Care Centre, commonly referred to as the Da'wah Centre, is appealing for funding to demolish its present, dilapidated premises and build a modern structure to meet the community's growing needs.

The ICC is unique among Muslim organizations in Ottawa because of its location in the heart of the city.  Situated at 312 Lisgar St., the centre offers a prayer area and a library that serves Muslim men and women working or living in the downtown core, visitors to Ottawa, diplomats and non-Muslims wishing to learn about Islam.

According to Sulaiman Khan, a founding member, and Osman Abdiwahid Haji, the centre's current president, ICC attracts more worshippers for dhuhr (midday) and asr (afternoon) prayers than any other mosque or prayer hall in Ottawa.

The fundraising dinner on October 23rd at the St. Elias Banquet Centre was headlined by Shaykh Abdullah Idris Ali, Secretary-General of Islamic Society of North America ”“Canada.  He  raised roughly $170,000 in pledges from the community.

ICC estimates the cost of demolition and rebuilding to be at least $4 million, not including the cost of the land.

Raed Arab, the project manager, outlined the features of the building.  The new building would, in effect, more than triple ICC's existing space ”“ welcome news for the more than 200 people who crowd into the small location for Friday prayers every week. The extra space will be used in part to expand the library, offices and prayer halls for women and men. There are also plans to establish a community centre and a regular soup kitchen . The first phase of the project -- filing a site plan and zoning application with the City -- is completed and the center has received permission to demolish the current 2.5 storey-building to make way for a 4-storey building.

At the fundraiser, Mr. Khan and Mr. Haji enumerated the services provided by  ICC over the last 18 years.  In addition to housing a large Islamic library, the centre is a source of information on Islam for Muslims and non-Muslims alike. ICC itself partners with St. Joseph Church on Laurier Ave. to provide meals to about 300 clients each month.  ICC has also arranged for two Muslim chaplains to counsel and monitor the needs of inmates at thirteen correctional centres in Ontario. Working with Correctional Service Canada, ICC ensures that rights of Muslim inmates are preserved such as receiving halal meals and facilitation for Ramadan. They receive a prayer mat, a copy of the Quran and access to other Islamic literature.

In order to take care of the growing needs of the community the Centre has recently incorporated  “Muslim Family Services of Ottawa” a charitable non-profit organization.  MFSO will take over the social services program of the centre including: youth, programs to rehabilitate and reintegrate young offenders, assistance to new Muslims and Muslims new to Canada, counseling for individuals and families.

In all its work, the centre's primary goal is da'wah (providing information on Islam to others). At the fundraising event, several participants spoke of coming to Islam through ICC.  Sakina bint Erik mentioned that while the centre has gone through many changes over the years one thing remains constant: its welcoming atmosphere.