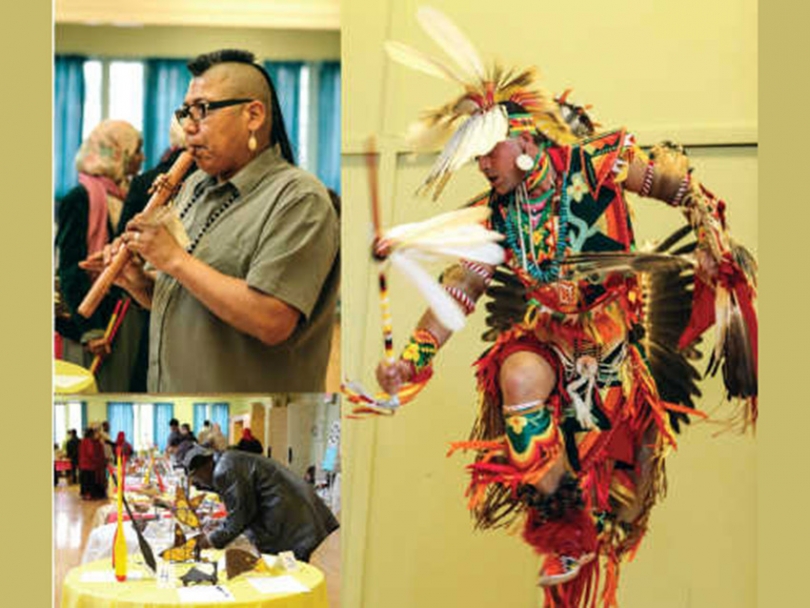 “Community Gathering of Four Directions Aboriginal Silent Auction” was the brainchild of Khadijah Linda Koosees, a member of the Cree First Nation, who is also Muslim and an active volunteer with Islam Care Centre's Fundraising Committee.

“We needed to think outside of the box when it came to fundraising,” she said. You can't get more outside of the box than asking Aboriginal organizations, artists, and craftspeople to donate their artwork, time, and skills to raise funds for the improvement and expansion of an Islamic centre.

The event, which raised over $4,000 for the centre, was also an opportunity for two communities, Aboriginal and Muslim, to learn about one another and challenge the stereotypes projected in the media about each community.

According to Ms. Koosees, “We are told as Muslims to help the poor. Same as Aboriginals. It is better to go outside of our communities and come together across cultures. We can work together and help one another.”

Ms. Koosees believes that there are far more similarities between Aboriginal communities and Muslim communities. She often has to clarify to Muslims that First Nations' spirituality centres around one creator spirit.

For Brock Lewis, who performed traditional drumming at the event, he only saw Muslims when he came to Ottawa in January to train with Aboriginal Experiences as a cultural heritage interpreter. “In Michigan, where I come from, there is not much diversity. It's mainly just White Settlers and different First Nations communities. There aren't even that many “Black people.” Lewis is passionate about being able to share his heritage with others. “I'm Ojibwa, and the Ojibwa people are said to be the storytellers so that's what I want to do.”

Mustapha Challal, a student at Lycee Claudel, a French private school, who volunteers feeding the homeless  in downtown Ottawa for the Islam Care Centre, quipped, “In our school we don't really talk about the history of Canada or Aboriginal cultures. I was always interested in Aboriginal culture.” He appreciated learning about the meaning behind the different pieces of Mr. Mullins' regalia and admired the craftsmanship of the pieces of Aboriginal art on auction.

No one was able to respond to Mr. Mullins' question about the eagle so he explained, “The Eagle is the only being that can fly the highest without any help. So we look at that bird as a messenger to the creator. Whenever we pray we believe that the eagle takes our prayers and brings it to the creator. Whenever a person in our community does a great deed we usually honour them with eagle feathers.”

Organisers say the auction has certainly raised the Islam Care Centre's profile both in mainstream Ottawa media and within Aboriginal communities. It also brought out many Muslims who have previously not been involved with the centre.

“Hopefully now they will learn about what we are doing and come and volunteer,” said Ms. Koosees. After the success of the “Community Gathering of Four Directions”, she foresees more “out of the box” collaborations for the centre in the near future.