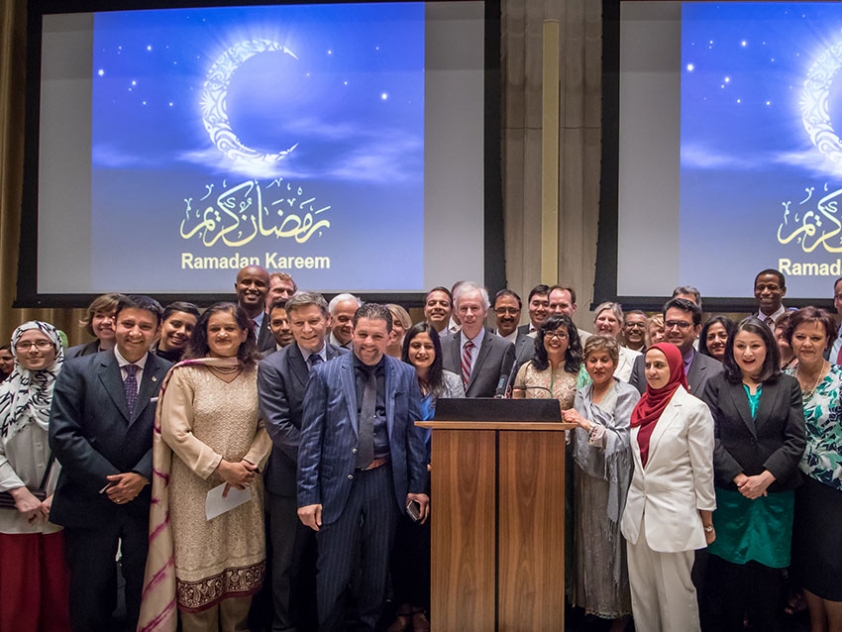 On June 15, members of Ottawa’s Muslim communities were invited for an iftar (meal to break the Ramadan fast) on Parliament Hill sponsored by 19 Members of Parliament. The event was co-sponsored by the National Council of Canadian Muslims (NCCM) and Paramount Fine Foods. Wahed Mohammed
01
July
2016

The event was co-sponsored by the National Council of Canadian Muslims (NCCM) and Paramount Fine Foods.

Muslim Link’s Publisher Mohammad Dourou and Editor in Chief Chelby Marie Daigle were honoured to be among the over 600 invited guests who gathered at the Sir John A. Macdonald Building.

At the opening of the event, Yasmin Ratansi, MP for Don Valley East, called for a moment of silence in honour of the victims of the shooting on June 12 of members of the LGBTQ community at the Pulse Nightclub in Orlando, Florida by Omar Mateen, who took the lives of 49 people, making it the deadliest mass shooting in American history.

Salma Zahid, MP for Scarborough Centre, also expressed condolences for the victims and their families during her speech at the iftar. “We stand in solidarity with our brothers and sisters in the gay, lesbian, bisexual, and transgender community. Such hateful acts of violence have no place in a free and democratic society.”

In her speech, MP Zahid spoke eloquently about respect for diversity and pluralism as a value important to both Canadians and Muslims. “Our Prime Minister, Right Honourable Justin Trudeau, often says we are stronger not in spite of our differences but because of our diversity,” she stated, “In much the same way, while Islam stresses the unity of humanity, it also recognizes human diversity, and gives us valuable principles to deal with ethnic, racial, and religious differences within society. In today’s globalized and often polarized world, it is important that we all remember the pluralist perspective of Islamic teachings in order to develop an environment of peaceful coexistence and harmony in our society.”

Lebanese Canadian Mohamad Fakih, the owner of Paramount Fine Foods, co-sponsored the iftar and provided the meal. “It is such a great honour to be part of the first iftar on Parliament Hill with our new great government and with such a great turnout here," he shared, "I was in Lebanon when I heard Prime Minister Justin Trudeau’s Ramadan greeting to the Canadian Muslim community. His message about diversity being a source of strength resonated a lot with the people of Lebanon.” But he cautioned those present to not take these values for granted, “These values came about because those who came before us fought hard to create the social cohesion that we enjoy today.”

Respect for diversity and pluralism was a theme of the event that was reflected not only in the multi-faith and ethno-cultural diversity present at the iftar, but also the respect shown for the diversity of communities who identify as Muslim in Canada invited to attend the gathering which included Sunni, Twelver Shia, Ismaili, Bohra, and Ahmadiyya community members.

Yasmin Ratansi, Canada’s first Muslim woman MP, was a lead organizer of the event. “The impetus for this iftar was a brain child of a group of Muslims, a civic organization, who asked me to host it,” she explained, “So then the driving force became me, and I reached out across the aisle to Muslim MPs. Then I wondered how many other MPs have large Muslim communities in their ridings, so I approached them. A Hindu MP brought in about 200 Muslim guests, look at the diversity there!”

For Majid Jowhari, MP for Richmond Hill, the iftar on Parliament Hill was one of many firsts he has felt honoured to participate in under the new government. “We also had the first Nowruz (Persian New Year) on the hill this year as well. It’s the first time in the history of Canada that we have such a diverse list of MPs and such a diverse and gender equal cabinet so I just see this event as a continuation of the many firsts this government has accomplished.”

Maryam Monsef, MP for Peterborough-Kawartha and Minister of Democratic Institutions received much applause during the event, particularly when Minister of Foreign Affairs Stephane Dion made reference to her while criticizing Islamophobia, “I just want to say to anyone who thinks that the Muslim community cannot succeed, remember that the Minister that will reshape the democracy of Canada is a Muslim! Anyone who thinks that democracy and the Muslim faith cannot go together, look at this Minister!”

During her speech MP Monsef recognized that the event was taking place on traditional Algonquin territory and reminded the Muslims in attendance of the responsibility they carry to represent the ideals of Islam, “As Muslims, our job from here on is to recognize that each and every single one of us is an ambassador of our faith, each and every single one of our words, our actions, reflect on our cultures and on our faith. The way we treat one another, the way we raise our sons and daughters, the way we behave in the workplace, the initiatives that we give our time and our money to, all of that, every day, every single moment we are representing our faith and our culture and Muslims all around the world.”

In her interview with Muslim Link, MP Monsef recognized the importance of her presence in Federal Cabinet for many Canadian Muslims. “It’s a tremendous responsibility,” she shared, “It’s an enormous privilege. I don’t take it lightly. I ask for the community to pray for me so that I can make sure that I don’t let them down and that I don’t let my constituents and the people of Kawartha down.”

Ihsaan Gardee, the Executive Director of the National Council of Canadian Muslims (NCCM), felt the event was “amazing” and a first for NCCM, “We have had Members of Parliament come to our events before but it is the first time we have collaborated on an event of this size and this magnitude on Parliament Hill, with so many ministers and Members of Parliament from different political parties attending,” he explained, “I hope people took away from this event a sense of empowerment, a sense that they are able to be connected to our system of government, to government officials, to have open conversations and to be able to build those bridges.”

Gardee expressed NCCM’s appreciation for the change in tone around Muslim Canadians under the current government. “I have heard from constituents from coast to coast who just have a sense of relief,” he shared. However, what he appreciated about the iftar on the Parliament Hill was that MPs from different political parties hosted and attended the event. “I tell people that we have to work with this government but we also have to work with all parties,” he explained, “We need to learn the lesson from this past election which is that governments come and go and we need to have a voice at every single table which is why it is important that we have our young people interning and volunteering for political campaigns across the political spectrum.”

As NCCM moves forward with their #StrongerTogether Campaign, being able to have open dialogue with MPs will become even more important. “The iftar on Parliament Hill is definitely a positive step in the #StrongerTogether campaign. We will be rolling out four different campaigns starting with Bill C-51 and having Canadian Muslims and our allies meeting with MPs across the country to express their concerns around this legislation and to hold the government to account on the promises that it has made to ensure that the new law and the amendments that they make to this law are more effective at striking that balance between national security, civil liberties and human rights.”

To view a short video from the gathering click