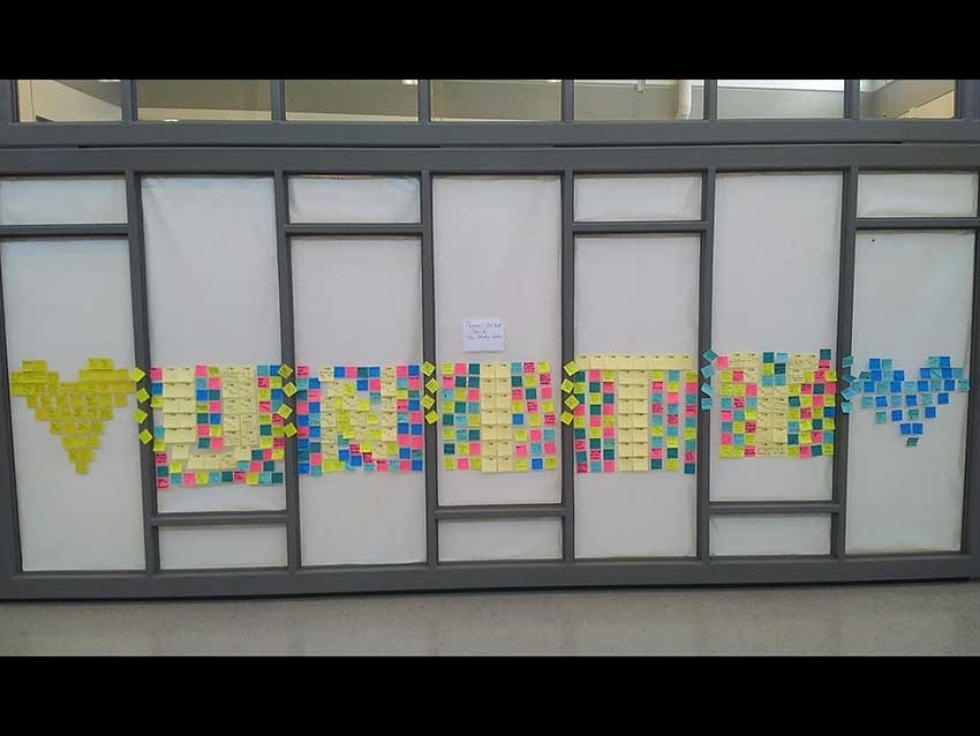 The project used photography and other tools like these sticky notes to help Muslim girls deal with racism and Islamophobia in their high-school community.
11
September
2019

It seems that 2019 is the year of youth activism. Youth have been speaking out against climate change, gun violence and our environment.

As a former teacher with the Calgary Board of Education and Little Red River Cree Nation, I have seen youth thrive when adults support their talents, passions and strengths. I have seen how youth respond when adults honour their “funds of knowledge” — the historically and culturally accumulated bodies of knowledge that contribute to well-being.

But not all youth feel supported by their leaders.

I can testify that with first-hand experience. I come from a refugee background: I was part of the group of Vietnamese boat people of Chinese ancestry in the late 1970s. I struggled in school because I didn’t speak English well enough in my early school years. Jim Cummins, a Canadian language education researcher, found that it takes about seven years for learners from immigrant and refugee backgrounds to catch up with their native-born counterparts. As a racialized person, I have generally been misrepresented by the dominant Canadian group and therefore felt devalued in Canadian society.

Because of feeling inferior and not very intelligent, I disengaged from school.

These experiences growing up have left me with a desire to support young people in schools — to help them feel heard and acknowledged. I want to let them know that their voices matter.

I recently completed my PhD and am now a counselling psychologist and researcher. My research looks at the resilience techniques used by oppressed people.

I worked with six minoritized Muslim female youth in high school in a photovoice, participatory action research project. Photovoice uses photography and group dialogue as a way for marginalized people to deepen their understanding of a community issue. The visual images and accompanying stories become tools to help reach policy- and decision-makers. I chose to call my interviewees “girls” instead of “participants” or “subjects” because I aim to humanize their particular experiences and because of the historically negative gendered language around the word “girl.”

The girls’ determination to challenge issues at school, such as racism, Islamophobia, mental health stigma and sexism was inspiring to me.

Islamophobia is a real and visible problem globally. Recent terrorist attacks in mosques by a white supremacist in New Zealand and in Québec in 2017 mean some youth at school are having to navigate being bullied and treated harshly due to their intersecting cultural identities of being Muslim and Canadian.

In Canada and globally, Muslims have been dehumanized, demonized and murdered.. At Canadian schools, they become othered.

Philosopher Iris Marion Young identified five faces of oppression: exploitation, marginalization, powerlessness, cultural imperialism and violence. The youth in my research group explained that they and their families have faced all these forms of oppression. Young suggests that those who are oppressed use a deliberative model of democracy to challenge their oppressions. This is a deliberative process with ideals of inclusion, political equality, reasonableness and publicity.

The girls said it was not uncommon for them to hear about Muslim women having their head scarves pulled off their heads. Some have experienced having their family’s vehicles being vandalized near their mosque. These stories and experiences made them feel othered, scared and nervous.

To help combat these feelings, the young students have written poetry, built art structures and planned anti-racism initiatives. They created positive messages on post-it notes so the messages can be passed on to peers and teachers in hopes that hate has no place in their community.

Throughout this process, it seems that teachers and community leaders have listened to their voices and have supported the students in their initiatives. The girls say that this perceived support has helped them feel more engaged and resilient to negative experiences.

By banding together to speak out against racism, the girls say they see changes in their schools. They feel less segregated and more united to support one another regardless of gender, race, sexual orientation and religion.

By having the courage to write poetry (poems titled “Shackles of Racism” and “Society is War”) and perform these poems in front of the entire school, they feel they are inviting their peers to talk openly about racism and to collectively think of ideas for anti-racism initiatives.

However, it is not up to youth to face this uphill climb alone — even with their strong will and desire to create social change. My preliminary research indicates that when teachers and counsellors listen, support and collaborate with youth in creative ways, it can have positive impacts - both personal and for the school and community.

Adult and educator support on mission-driven youth creative work can bring a feeling of purpose, meaning and overall positive well-being to youth. Youth may become more confident about speaking out for issues that matter to them personally.

Therefore, based on my study, I believe it is crucial for adults to hear what youth have to say and encourage their ideas of social change.

It is absolutely phenomenal what youth can do when they work together along with adults who support them in their passions for change. There is no limit to their creativity, activism and civic engagement.

[ Deep knowledge, daily. Sign up for The Conversation’s newsletter. ]

Gina Ko has a doctorate in Educational Leadership and is also a Registered Psychologist working with often marginalized populations.

Gina’s research pertains to youth activism; specifically, the title of her thesis is “The Experiences of Youth from Immigrant and Refugee Backgrounds in a Social Justice Leadership Program: A Participatory Action Research Photovoice Project.”

Knowing there is structural injustice and oppression, Gina is passionate about student voice and working with youth to support their social justice endeavours