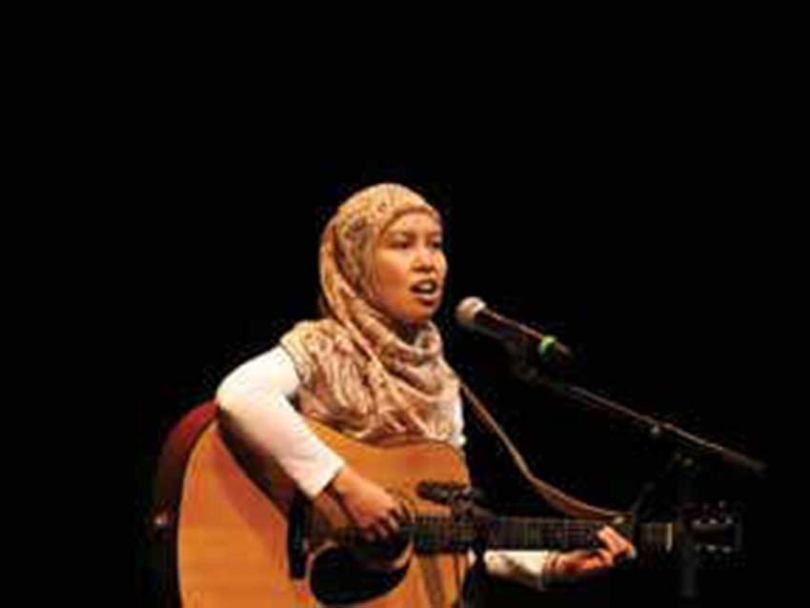 Expressions of Muslim Women held their 4th annual show called Winds of Change at Centrepointe Studio Theatre on Dec. 10, 2011. The show exhibited artwork and performances by local Muslim women to a female audience. The new venue provided a professional space for this group of talented women to share their art with a full house of over 200 people. Proceeds went to local charities, including the Sadaqa Food Bank. The following are some of the items presented and the reactions from audience members:

The ratio of my bowl of cereal

is about 1 part milk and

because milk is really subsidiary to this meal

the cereal is what makes or breaks the deal

and for the special days

cocoa puffs have their way

sometimes for brunch, and sometimes even for lunch

it's all about good the ol' captain crunch

and stacked with sugar

and the calories absolved

as you play the games

and read the quotes

strategically placed on the box of oats

they keep you company

and make you forget

of the breakfast table

conversations that could be

your stomach can make your mind flee

but your conscience disagrees

it begs you to see

the horror of your apathy

the indifference of your stupidity

the one's to replace your habit

to keep you busy

your obsession too silly

for you to see

beyond your cereal glee

so of course, you write a

instead of serial wars

that numb our min

and pacify our heart

and calling it art

but that is where apathy starts

grants us a space

to the fine art

and dumbed down pie charts

these second long bits of information

filled with images of annihilation

until each tragedy and victory becomes equal

in our minds that can't easily distinguish anymore between

the implications of the death of Heath Ledger

or the death of Jack

our minds that cannot retain

the tragedies, one after the other

intermittently placed among the meaty gossip

of another celebrity scandal

or an old product by apple

sold with a new angle

in depth coverage of an issue

becomes too long to read

everything is catered to instant gratification

to our most uneducated guesses

with a bellyful of cheerios

I scroll through the headlines

the revolutions abreast in middle east

the occupy movements on wall street

and police brutality in Ottawa

with a bellyful of cereal and a mind full of sugar

it's all the same

it's all a bite of news that haunts me

until I look away, and it escapes my mind

a bite of news

placated by a bite of fruit loops

a song by Audrey Saparno

We read an article in French class today

I read an article in French class today

But I almost cried

We read an article in French class today

A mother trying to find her son, people writing their numbers on their arms

So their bodies could be identified

How can a government shoot on their own?

How can a government shoot on their own?

I heard a story on the news today

About a community living in sub-standard conditions

Fresh sewage on the ground floor

Metres from where they sleep

I heard a story on the news today

About a community who live in Northern Ontario.

How can we live this way?

How can we live this way?

Sisters, we can do something.

Sisters are doing something.

”˜Cause the winds of change are bound to blow,

Yes the winds of change are bound to blow, 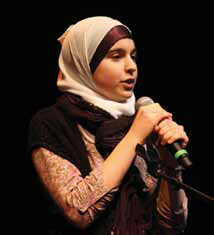 I have a story that needs to be told

and not matter how many copies are sold

I don't think it will ever get too old

not too long ago

I met this incredible girl that means so much to me

one who wouldn't let herself be

and it kills me that she'll never see

nowadays we have this little problem with girls

people say there's no such thing as perfection

but you are my kind of perfection

and when I tell you that

you'll come up with some sort of objection

I think it's because you are too afraid of rejection

its cause you have this crazy obsession

you'll say you got to teach like bugs bunny

and you'll go spend all that money

on products so that they'll make your skin light

but to me, it don't matter as long as your heart shines bright

you say you have to be ten pounds lighter

if it was up to you, you'll pull an all-nighter

doing crunches and pushups on that yoga mat

but I swear to you, you won't look lovely like that

and you'll look in the mirror and say it's not enough

and your eyes will wrongly criticize  your own body

why you being so rough?

you step on the scale and the numbers start going up

trickling down  your cheek. a glistening tear. your biggest fear,

and what I am about to say I am being 100% completely sincere.

Cause if I was that number on the screen, ill want to scream

that number isn't who you are and what you've been

and all the wonderful things you can achieve

if I come to you, you'll tell me to leave

cause you don't want nobody seeing you that weak

and you'll go on with your day

but even if someone tries to say

or complements you on how you look today

I bet you that you'll take it the wrong way

but it all comes down to this

is to show you that beauty exists from within

not what you wear or who you know

not the colour of your skin, or where you go

it's the words you speak and the hardships you've endeared

so here it is my dear

I love you no matter the number on the screen

I love you because you are true and real

I love you for that tint in your cheek

I love you because I know you are mine to keep

It was with utter delight that I received an invitation to witness such talent.  Last night was absolutely incredible and I felt honoured to partake.  There was such a range of talent, backed by passion, strength, and remarkable grace.  I am visually impaired, but clearly saw your beauty.  I do not know you, but felt such personal pride to be a woman.  And by the end of the evening, I wore that feeling home. Thank you so much.

This year was my third time to go.  I was really sad that I missed last year.  I attended the first year I was in Ottawa and was able to meet some people then.  And, now I find I know a lot of people and that makes me feel settled.  I think the idea of EMW is great as it is a positive thing that the Muslim Community is doing and doing it together, not just one culture at a time.  It is also a good example to set for the youth; it may give someone incentive to develop their talents.  I felt a great improvement in the organization and the quality of the performances from the first year.  Although I did not like the venue this year as compared to previous years, it proved to be advantageous in the actual running of the program, ie. the lighting and the sound system.

The concert was excellent, as it provides a forum for Muslim women to perform, who otherwise would not have the opportunity to do so.

There was a largely Arab component to the performances this year as compared to a couple years ago. In future, would like to see more from different Muslim cultures.

Musicians were all talented though. Instruments were cool.

Spoken word was definitely my favorite though. Many of the subject matters discussed in the poetry have occurred to me as well, so I identified with the authors, as I too have those same thoughts. It was comforting to know others feel the same passion, and can put it so eloquently!

I have been to the show in the past and participated in it once. Each year, there is always a new dimension added, something I learn or some new respect and admiration I find for the talents of my sisters. It is a day I am very proud to be a Muslim woman.