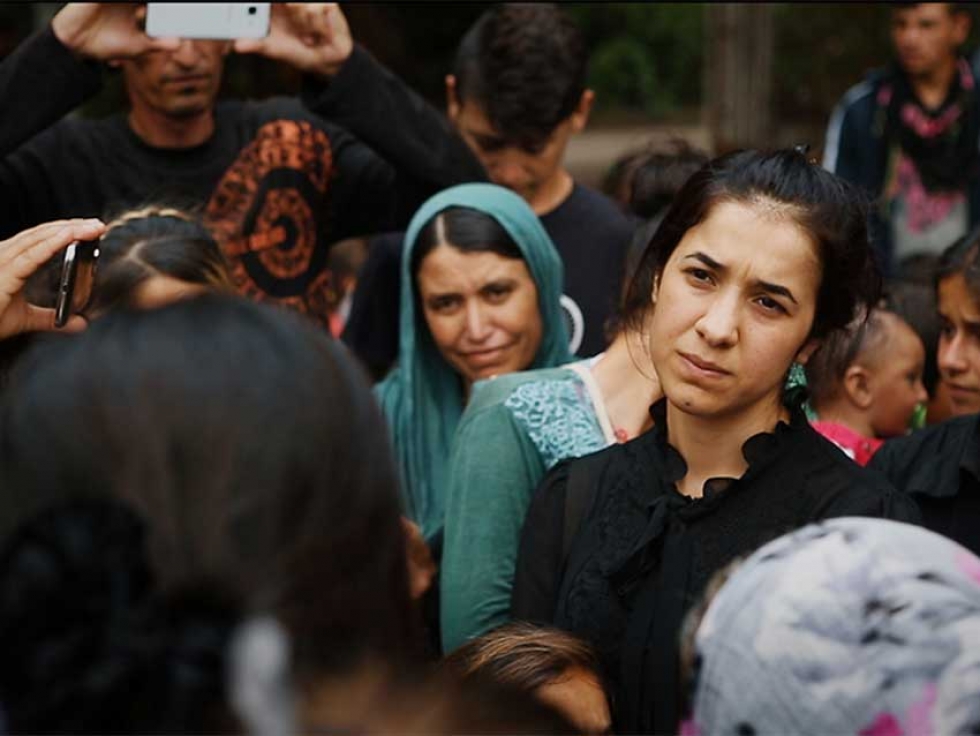 One World Arts is hosting a special screening of the acclaimed documentary “On Her Shoulders” on Thursday April 4, 2019, 7:00 pm, ByTowne Cinema in Ottawa.

This screening is hosted in partnership with Nobel Women’s Initiative.

Proceeds from this screening will go towards supporting the 30th Annual One World Festival run by One World Arts, which is a volunteer-led, charitable organization working to create local awareness on global issues, through the arts.

The documentary follows Yazidi human rights activist Nadia Murad. Born into a farming family in Kojo, in the Sinjar region of Iraq, in 2014, when Nadia was 19 years old, Daesh (ISIS) attacked her village and killed 600 Yazidi men, including several of her family members. As the Yazidi are a religious minority, they were particularly targeted by Daesh in what has been labelled a genocide.

Nadia was held as a slave in the city of Mosul, where she was beaten and raped. Nadia was able to escape after her captor left the house unlocked. Nadia was taken in by a neighbouring family, who were able to smuggle her out of the Daesh controlled area, allowing her to make her way to a refugee camp in Duhok, northern Iraq. There she was offered the opportunity to move to Germany, where she now lives.

Nadia Murad is the winner of the 2018 Nobel Peace Prize along with Congolese gynecologist Denis Mukwege for "their efforts to end the use of sexual violence as a weapon of war and armed conflict". She is the first Iraqi to win this prize. She donated her prize winnings of $500,000 to support her organization, Nadia's Initiative.

She is the UN’s first Goodwill Ambassador for the Dignity of Survivors of Human Trafficking.

Since 2015, Nadia has been working to bring Daesh before the International Criminal Court on charges of genocide and crimes against humanity.

With deep compassion and a formal precision and elegance that matches Nadia’s calm and steely demeanor, filmmaker Alexandria Bombach's documentary "On Her Shoulders", follows this strong-willed young woman, who survived the 2014 genocide of the Yazidis in Northern Iraq and escaped the hands of Daesh to become a relentless beacon of hope for her people, even when at times she longs to lay aside this monumental burden and simply have an ordinary life.

As Canada is now home to hundreds of Yazidi refugees, many of them survivors of Daesh, this documentary will help viewers to better understand the current challenges facing the settlement of Daesh survivors due to the trauma they have experienced. Yazidi Canadian Nafiya Naso has initiated a Parliamentary Petition to the House of Commons requesting that "the Government of Canada to expand the definition of family to include extended family members for Yazidi refugees given that they are genocide survivors and given that many of their immediate family members are deceased or missing in action and to immediately clear the backlog in the existing sponsorship cases under the One Year Window provision for children." If readers wish to sign the petition online, click here.

Nadia’s Initiative (NI) is a registered 501(c)(3) organization aimed at increasing advocacy for women and minorities and assisting to stabilize and redevelop communities in crisis. Presently, the team is embarking on efforts to establish meaningful and sustainable programming in the Sinjar region of Iraq through the Sinjar Action Fund. Since the invasion of the so-called Islamic State (IS) in 2014, the Sinjar region has struggled to ensure the safety and livelihoods of the primarily Yazidi population now displaced throughout the country. As Iraqi coalition forces have made progress against IS insurgents, northern Sinjar has increasingly opened up for resettlement of this community. Unfortunately, only minimal public assistance has been given for this cause. Consequently, NI seeks to establish both short and long-term programming aimed at redeveloping Sinjar, the ancient homeland of the Yazidi minority. For more info visit the website here.

Despite the struggles Canada is giving them better care/support than they can ever have in Iraq. Yazidi survivors in IDP camps r not able 2find the care Canada is providing. Thank you, Canada!
Canada Struggles as It Opens Its Arms to Victims of ISIS https://t.co/EUSwkUKCnx— Nadia Murad (@NadiaMuradBasee) March 17, 2018