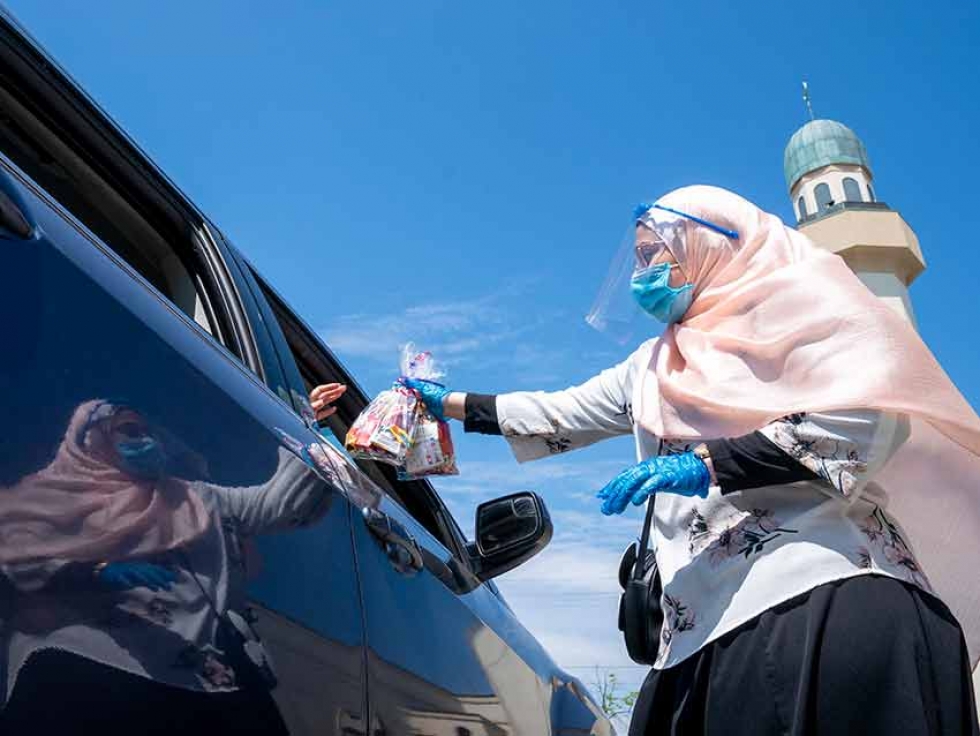 An Islamic Society of North America Mosque community member hands out candy to children in a drive-through Eid celebration in Mississauga, Ont., on May 24, 2020 THE CANADIAN PRESS/Frank Gunn
15
Jun
2020

Every year, Muslims around the world celebrate the month of Ramadan with a combination of fasting, prayer and spiritual reflection.

This year however, due to the coronavirus outbreak and worldwide lockdowns, Muslims, like many other religious groups, had to rethink their customs by adhering to social distancing rules.

In provinces like Ontario, where gatherings were limited to no more than five people during the Ramadan celebrations, Muslim families were unable to break their fast together or gather for worship.

But various local governments across Canada made onetime exceptions for Muslims to broadcast their call to prayer. Canadian cities like Windsor, Toronto, Ottawa, Calgary, Edmonton and Vancouver found ways around their noise control bylaws in what was described as a “ground-breaking acknowledgement of multiculturalism and religious tolerance” by an Arab news organization.

While the call to prayer, known as the adhan, is routinely heard in Muslim countries, this was the first time the broadcast was publicly heard in Canada.

Allowing the adhan to air publicly on loudspeakers required municipalities to make changes to their noise control bylaws or find ways to exempt religious groups from committing possible noise violations.

There are two potential problems that arise in these calculations.

The first deals with the noise aspect of the broadcast, as the call to prayer is traditionally conducted five times a day and can last anywhere between two and five minutes. Local governments therefore had to find a compromise that reasonably accommodated the prayer call without causing significant noise disturbances throughout their cities.

The second, and perhaps the most controversial, is the religious content of the broadcast. The call to prayer announces a declaration of the Islamic faith by proclaiming a belief in one God.

Allowing a call to prayer with such deliberate language had the potential to upset members of other religious groups or residents without particular religious beliefs.

Worse, there was the potential for xenophobic backlash. Within a week of the decision to make noise bylaw exemptions, for example, the Peel District School Board in Ontario terminated a school council chairman for his Islamophobic commentary on Twitter.

Not a noise problem in some cities

The decision of local governments in southern Ontario to allow the call to prayer caused few noise disturbance issues and more religious ones. Data gathered from interviews I conducted with city councillors in Toronto, Mississauga, Brampton and Hamilton reveal that the noise caused by the call to prayer was a non-issue.

According to Carolyn Parrish, Mississauga city councillor: “We received no legitimate noise complaints for several reasons. Most mosques are in non-residential areas. Also, we requested the Imams to set the volume at 50 per cent of what is allowed with an amplified sound permit. The call was only once a day in the early evening around 8:30 p.m., so not a time that would intrude on anyone’s sleep or work activity, even if the sound did hit a few homes.”

Parrish further elaborated by noting: “Some emails tried to use sound, disruption of sleep, etc., as an excuse for their complaints. They were thinly veiled cover-ups for real motives, especially when they gave addresses that weren’t anywhere near a mosque.”

Similarly, the office of Michael Thompson, Toronto city councillor, indicated that there were complaints about Muslims being allowed to broadcast the call to prayer. While the councillor did not receive any noise complaints from his constituents over the course of Ramadan, he did receive email complaints from an organized group in Mississauga.

A follow-up response from Thompson’s office noted that “there were about 20 exactly worded emails from various addresses advising that people already have immense rights to practise their religion. Broadcasting over a loudspeaker forces residents to have to listen to religious preaching or scripture when they have not opted in.”

Gurpreet Dhillon, a Brampton city councillor, said there were no noise complaints — only complaints about “the allowance of the prayer.”

Noise complaints in the U.S.

Unlike some cities in the United States, including Hamtramck, Mich., and Culver City, Calif., where there were noise complaints related to the call to prayer, Ontario complainants seemed more concerned about the content of the broadcast.

Almost all of the city officials I spoke to have indicated there have been no serious noise disturbance issues. This was in part because mosques or permitted prayer buildings were well outside of residential areas.

The office of Sheref Sabawy, a member of the Ontario legislature for Mississauga-Erin Mills, said some local residents escalated the issue to their provincial representatives. The office received several emails about both the noise emitted from the mosques as well as the religious content.

According to the Municipal Act, municipalities within Ontario have the power to make changes to their bylaws as they wish.

Both the cities of Hamilton and Brampton essentially took the least contentious path by taking the issue to a vote.

According to city councillor John Kovac, his office “received between 100 and 200 phone calls and emails with concerns related to how the decision was made.”

In Toronto, city councillors appeared to have been left out of the decision-making process completely. City councillor Jim Karygiannis said Toronto city council had nothing to do with the decision. Instead, he said it was “an operations decision by the director of Municipal Licensing and Standards that was ratified by Mayor John Tory.”

Prayer in public space has always been a sensitive issue. In a 2015 survey of 1,500 Canadians, more than 50 per cent agreed that official public prayer violates the state’s duty of religious neutrality.

While the call to prayer itself may not be considered an official prayer, its public broadcast this year certainly caused some tensions. What the preliminary research has shown however, is that it wasn’t the noise that people objected to for the most part.

Some residents in these Ontario cities were vehemently opposed to the decision to allow the adhan, and so it’s possible the issue could find itself subjected to legal scrutiny under the Canadian Charter. But given the way the courts are operating during the pandemic, it may be some time before we find out.

David Said is a Ph.D candidate in the department of Political Science at the University of Guelph. He has a diverse academic and research interest in the area of Canadian Law and Politics. His current research area focuses on relations between administrative law decisions and public policy and public administration.