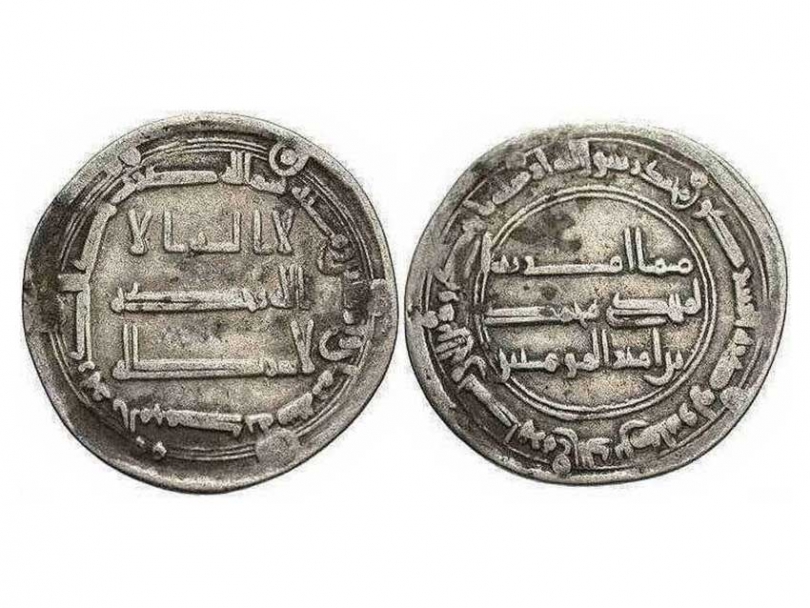 Silver dirham coins used during the time of the famous Abbasid Caliph, Harun al Rashid. His reign was marked by scientific, cultural, and religious prosperity. Art, music and literature also flourished significantly during his rule. Photo credit: http://i1.lelong.com.my
08
May
2012

From the time of his caliphate to the tenth century, the Muslim world exercised uncontested economic supremacy over the Occident as well as the Orient. The Abbasid Empire was such a big and powerful state, no enemy posed a serious threat. As a consequence of its stability and security, it became the most prosperous economy of its time. With the spread of Islam, sleeping agricultural and rural sectors suddenly became alive and robust because of the establishment of law and order, and the availability of a geographically vast market that operated without fear of the caravans being waylaid en route. This motivated all to do their best for their own advancement as well the benefit of society.

More than eighty per cent of the empire”˜s population lived in the countryside and cultivated the land.  Agricultural productivity was much higher than in Western Europe. Egypt for example, yielded on average four or five times as much wheat per hectare as did Europe in Charlemagne's time. Comparable yields were not achieved in France until the eighteenth century and were unusual even then. The Arabs were not born cultivators but made good use of methods that had existed in the lands they conquered, and often devised improvements. New farming techniques were introduced and encouraged, and many new crops were grown. The use of water irrigation systems was highly developed.

In harmony with emphasis on justice in the Islamic message, the Prophet, peace and blessings be upon him, and the first four caliphs adopted the more humane practice of leaving agricultural land in conquered territories in the hands of original owners -- in sharp contrast with the Byzantine and Sassanian practice of confiscating it from their owners for distribution to their military elite and soldiers. In return for protection and full benefits of citizenship in the Muslim caliphate, these original owners paid a poll tax. This arrangement was perhaps the most important cause of the agricultural revolution that took place in the Muslim world. The just levy of taxes and use of the proceeds for development accounted for why farmers preferred Muslims to Byzantine and Sassanid rulers.

Rural prosperity flowed into all other sectors of the economy and society. It led to a substantial expansion of urbanization and the development of urban crafts and industries. The Islamic conquests opened up far greater volumes of exchange, and the Abbasids expanded these on a prodigious scale. The soaring prosperity of the of the caliph's empire and the improvement of living conditions resulted in rapid demographic growth.

Baghdad was the biggest city in the world with a population of perhaps a million and the most prosperous town on earth. The factors that made possible this phenomenal growth were: peace, political stability, efficient administration, new resources or economic currents widely exploited by active population. This vast common market, with free movement of goods, capital, labour, and entrepreneurs, led to the expansion of internal and external commerce. A vast network of trade was established both with the empire and with the outside world. Commercial activities even expanded as far as China during the days of Harun al-Rashid. Iraq became a centre of world trade and finance.

A thirst for knowledge

Rural and urban prosperity promoted a flourishing and diversified urban culture. The availability of financial assistance to both students and scholars and the presence of an environment for rigorous intellectual activity, along  with tolerance, the like of which was at the time quite unknown in the rest of the Europe, made the Muslim world a meeting place for scholars of all fields of learning and persuasions (Muslims, Christians and Jews).  So vigorous was the flowering of science and philosophy in the time of Harun al-Rashid and the next two centuries that the period has been called the “golden age of Arab science”.

Underlying reasons for this commercial expansion:

Although law and order and the vast common market contributed greatly to the economic growth and prosperity, there were also others factors that played important role.

There was an astonishing dynamism that seized the people of the empire soon after the Arab conquest and persisted in the decades following the Abbasids revolution. Historian Andre Clot, author of Harun al-Rashid & The World Of 1001 Nights writes: “The speed with the legions of Islam, actually an incredibly small number of people, had conquered such vast territories, and the subsequent glorious rise of Baghdad, inspired the Arabs with an enthusiasm that would not be seen again until the age of the great discoveries several centuries later.”

Islam gave a tremendous incentive to cultural achievements which constitute on the proudest pages in the history of mankind; and it gave the incentive by saying “yes” to the intellect and “no” to obscurantism, “yes” to action and “no” to quietism. Science and learning had no greater champion than Muslims civilization and no home more secure than the lands in which Islam was supreme.

Muhammad Asad, author of The Road to Mecca points out that “It was not the Muslims that had made Islam great: it was Islam that had made Muslims great. But as soon as their faith became habit and ceased to be a programme of life, to be consciously pursued, the creative impulse that underlay their civilization waned and gradually gave way to indolence, sterility and cultural decay.”

Similarly George Sarton pays tribute to Islam in his Introduction to the History of Science by writing: “Religious faith dominated Muslim life to an unprecedented extent. No people ever took their religion as seriously as the Muslims, and this was undoubtedly the main cause of their cohesion and of their strength against their enemies who were divided and whose faith was weak and tepid”.

There were several ways of doing business. One could either go to other countries in person to buy and sell products, or entrust goods to a traveler who would then sell them and buy others. Sinbad, famous hero of the Thousand and the One Nights, made many voyages in the company of other merchants and made large profits.

The most successful way of doing business was through a commercial system that promoted entrepreneurship and risk taking. Mudaraba was the preferred classical Islamic financial instrument of trade and commerce in medieval time. This institution which substituted credit based on interest was based on the concept of profit and loss sharing.

Mudaraba was a business partnership arrangement in which a principal entrusted his capital or merchandise to an agent, mudarib, who was to trade with it and then return to the investor the principal and a previously agreed-upon share of the profits. As a reward for his entrepreneurship the agent received the remaining share of the profits. Any loss resulting from the dangers of travel or from an unsuccessful business venture was shouldered exclusively by the investor. The system had been practiced by caravan traders in the pre-Islamic epoch. Jurists had declared it lawful under Islam and the system spread through the Muslim world during the tenth century, then through the Mediterranean basin and into Europe.

Today, Islamic banks have shunned the practice of mudaraba and musharaka. They have shown a strong preference for debt-based modes of operation. Instead of promoting risk taking and the principle of profit loss and sharing, Islamic institutions closely mimic conventional banking practices.

One key lesson derived from Islamic history is that the decline of the Muslims was not due to any shortcomings in Islam but rather to their own failure to live up to it. For, indeed it was Islam that had carried the early Muslims to tremendous cultural heights. Throughout history Islam has remained the ultimate source of inspiration and the most decisive rallying point for revival and regeneration. If the Ummah (global Muslim community) fulfils its responsibility, in accord with the divine guidance and following the uswah (life example) of the Prophet Muhammad, peace and blessings be upon him, then it is destined to achieve peace and prosperity in this world and success and salvation in the life to come.

The Quran says: “Allah has promised those of you who believe and do righteous deeds that He will surely bestow upon them power in the land as He bestowed power on those who preceded them, and that He will establish their religion which He has been pleased to chose for them, and He will replace with security the state of fear that they are in. Let them serve Me and associate none with Me in My divinity. (Ch.24: v.55)