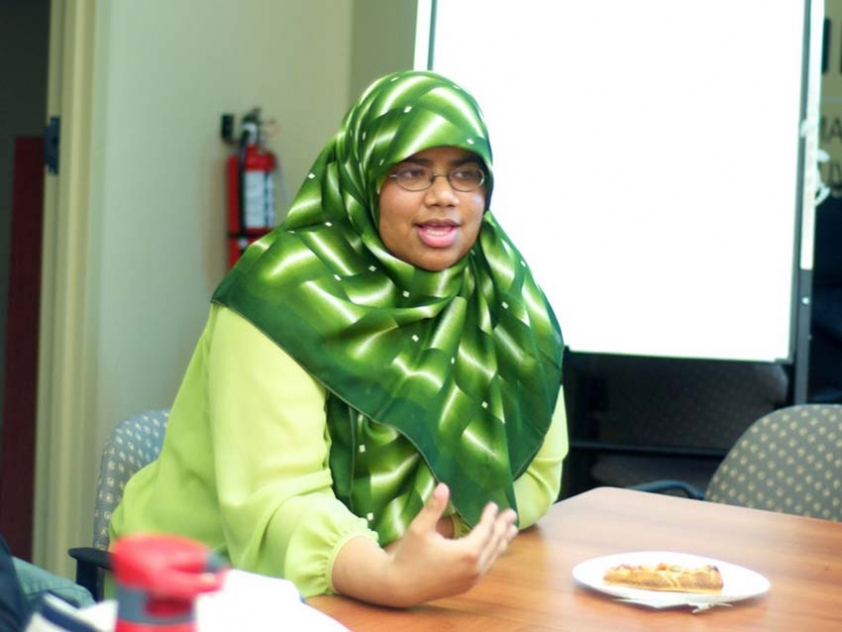 Chelby Marie Daigle is a mental health advocate.
07
May
2016

Talking about Suicide While Muslim

Inspired by a recent Letter to the Editor, I have decided to share some reflections on why we need to make it easier to talk about suicide in our communities.

It is hard to find Muslims who feel safe enough to speak publicly about living with a mental illness. It is even harder to find Muslims who will go on the record stating that they have contemplated or attempted suicide. Because suicide is a major sin in Islam, as in most religious traditions.

The irony here is that most of the time when I see Muslim Canadians rally to do something about mental illness in our communities it is in the wake of a suicide, often of a young Muslim. So, we know for a fact that Muslims are committing suicide in our communities.

It is strange that we use the word “commit” when describing the act of suicide. That’s because attempting suicide used to be a criminal offence in Canada before 1972.

A sin and a crime-who is going to admit that they have done this?

So here it goes. I have attempted suicide both before and AFTER my conversion to Islam, and I have contemplated suicide so seriously in the last few years that I have had to go to the hospital emergency and be taken under long-term hospital care. Alhamduillah, I am still here and healing but my mental illness is a reality l live with on a daily basis. It is not something that can be “cured” but with proper supports it can be managed.

I have been speaking publicly about living with a mental illness, in my case chronic depression and anxiety, since my teens. I was officially diagnosed with a mental illness at 15 at the Children’s Hospital of Eastern Ontario (CHEO). My first well-paying job came from CHEO as I was hired to be part of a team of other CHEO teen patients to make a video about the teenage experience of living with mental illness which would be used to help train psychiatrists. I would eventually take the video to my high school and ask to present it in any class that would take it.

I had a certain bravado around speaking publicly about my illness from a young age. One reason for this was that I knew it was so important for me to speak out so other people knew they were not alone.  But another reason was that, I was just not afraid of being judged or attacked or shunned because of my illness because nothing anyone could say or do to me would ever be worse than the things I said and did to myself.

And that is the reality for many of us who have gotten to the point of trying to take our own lives. We have become experts at self-loathing. No hater can beat us at hating on ourselves. No mean girl clique could more efficiently make us feel worthless than the bullies in our own minds.

And this reality of self-loathing is what we need to be very careful about when we talk about suicide.  I am always fascinated by how talk of suicide raises anger in other people. “People who commit suicide are selfish. People who commit suicide are cowards.” Okay, do you really think saying things like that is going to make someone who feels so much self-loathing that they want to end their life NOT want to die?

The same goes for religious arguments that revolve around hell. “If you kill yourself, you are going to go to hell.” If you are full of self-loathing you probably wrote off the possibility of EVER being good enough to go to heaven. You might think you BELONG in hell.

When I am overwhelmed by a compulsion to end my life I don’t think about how bad a Muslim I would be to throw away Allah’s gift because I think that I am so worthless that I should no longer be taking up the food, water, and oxygen of other more deserving parts of Allah’s creation. I don’t fear the punishment of hellfire because I think that is what I deserve.

The “carrot and stick” logic we often use when trying to enforce religious rulings often doesn’t work when you are dealing with deeply suicidal people who have lost all hope. In my own experience, what has brought me back from the brink has not been the promise of reward or the fear of punishment. It has been connection, to my creator, to people, to pets, to a sense of purpose. As a community, the more we can help people feel connected, and the less we increase people’s self-loathing by dumping a bunch of shame on them, the more we will be able to offer support to those of us who are struggling with suicidal thoughts.

If asked, I will continue to speak publicly about living with mental illness and contemplating suicide; however, my hope is that more and more Muslims born into the community will come forward and feel supported enough by their families and safe enough in the community to share their stories because we need to learn from their experience, wisdom and insights if we are going to develop into a community that can prevent its members from taking their own lives.

My advice for those of you who are Muslim and are considering public speaking on your journey with mental illness is to make sure you have a support system in place so that you can cope with the number of other Muslims who will want to confide in you about their own struggles with mental illness or ask for referrals to counselling services, something which I am asked to do regularly since I started speaking openly about my illness. Frankly, we need support groups in our mosques and community centres so Muslims struggling with mental illness can connect with each other for mutual support.

Also, be prepared for the haters because they will come. For many years when I publicly spoke about mental illness to Sunni, Shia and Ismaili Muslim communities, I never had to deal with this problem, but since taking up the role of Muslim Link Editor in Chief, I guess being a more public community figure has changed how I am perceived by some people.  I have received some pretty mean-spirited attacks when I have shared about my struggles. I have been accused of trying to get attention and of “showing off” my trauma. So again, have a strong support system so you can deal with this kind of backlash but know that the people attacking you are probably just in a lot of pain themselves. Don’t let them stop you from sharing your story. Your story is too powerful and can help too many people for you to let anyone silence you.

My message to Muslims coping with suicidal thoughts is that Allah created you for a reason even if you are not so sure what that is. We know it is to worship Allah but that can manifest itself in so many ways beyond the five pillars. I still am not really sure what my exact purpose is. What I do know is that because of my illness I have had to give up on many dreams around school, career, and family which, when I am not well, can feel like failures that rob me of any sense of hope for the future, but when I am doing well, I can see them more as opportunities to take less well-trodden paths in life.

Our lives may not turn out as we had hoped, but that doesn’t mean we cannot find things to be grateful for. Since my mother’s death I have had to cope with her loss, the loss of a job, and the loss of a friendship. On bad days, this is all I can see, this is all the illness lets me see.

But on better days, I can see what I still have and what I have gained- the ongoing support of so many awesome friends and community members, the continued opportunities to meet and connect with wonderful people and expand my understanding of the world,  the strange new recent experience of finding myself crying for joy at a friend's wedding.

I look forward to the lessons about myself and the world that Allah keeps teaching me through the surprises and unpredictable moments of my life. This is where my hope comes from now.

I cannot promise you that life in this world, the dunya (the temporal world), will get any easier. But you are supposed to be here, so please stay.

To view a video of Chelby Daigle speaking about her experience living with a mental illness at the Islamic Foundation of Toronto, click