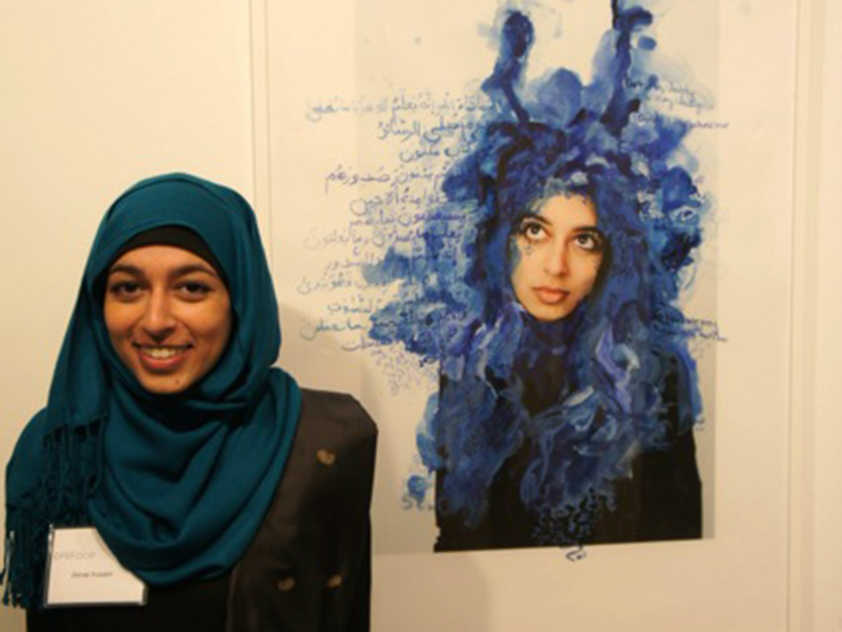 Muslim Link interviewed Zainab Hussain about choosing her non-traditional major, unveiling her show Unseen/Seen, and the challenges and joys of being a Muslim Fine Arts student and artist.

Why did you decide to study Fine Arts at University?

I always knew I wanted to do something art-related, something that involved making and creating; something that combined intellect with skill. I thought about architecture and industrial design first but I realized that I didn't really want to be an architect. I was just doing it to be more practical, and really I was only interested in the art side. And although an art degree seems particularly impractical, it's still a bachelors and just as good as any other degree in the arts. So I decided to do something that I would enjoy. I'm glad I did, because I've really enjoyed my university experience.

How did your parents feel about your choice?

They were very encouraging. They've always supported me completely on anything I wanted to do. My mother sometimes worried that I'd have to paint nude people, but since I went into photography, it wasn't really an issue. But all they want for me is to be the best at whatever I'm doing.

Can you discuss what you hoped to explore with your exhibit Unseen/Seen?

The concept came about because I think that there's a lot of judgements and misunderstanding when it comes to Muslim women, especially those who choose to where hijab (a concept that seems incomprehensible to many in the West). The underlying message is that there's a lot more to our identity than a piece of cloth on our heads, that there are more interesting and important things to know about a person than what their hair looks like.

Did you face particular challenges as a Fine Arts student because you are Muslim?

I suppose just always being in a non-Islamic environment, it took me a while to feel comfortable. I always felt like I stuck out. In the end I think this helped me, since even professors and faculty who had only met me once remembered me. I was at first shy about my religion and hesitant to make art with Islamic themes, but over time I think becoming more confident in myself and my art, with encouragement from friends, I was able to embrace the fact that I was very different from everyone else in my programs. As such, I had a unique point of view and a unique subject to work with for my art. In the end I think this helped me a lot more than it could hurt me, as I realized there were lots of subjects that only I (within my program) could talk about without looking ignorant. 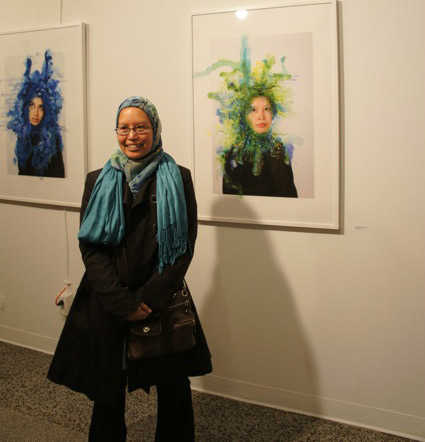 But isn't it a problem if people can't understand your subject matter?

True! It was sometimes hard to get a point across, or get helpful feedback. It was a challenge to make something that everyone would understand while not compromising the artistic integrity or message. But in the end I think it worked out for the best since I want to make art that can be appreciated by Muslims, but also not pigeonhole myself into making art that only appeals to Muslims. I'd like it to be something that, with a little thinking, anyone can understand. So their confusion helped me to see where I could improve my project to make it clearer.

You won a special prize at your graduation exhibition. Tell us about that.

It's called the Suzanne Rivard-Le Moyne Award.  It's basically first prize overall, or best in show. It's the highest prize you can receive from the university in Fine Arts. Most of the prizes are specific to a certain medium. Since my project was the result of a combination of mediums, it didn't really fit into any of the other categories. I think also the subject matter was something that a lot of the professors had not really seen before and I hope I gave them a fresh and interesting perspective to consider.

What advice would you give to other Muslim students thinking about studying art?

Just make sure it's something you love and that it makes you happy. Art is hard work, just like studying any other field, but if it's something you enjoy it won't feel like work. The art world can be crazy and a little flaky but I would absolutely encourage them to pursue it. It is always great to have more Muslim youth using their creativity in the way of Islam.

Making art that is in the way of Islam doesn't always have to be explicitly related to Islam. If it's environmental or about human rights, that's also an Islamic message. The field of art is so broad and diverse and can lead to so many interesting paths. It's not just paint or taking pictures; you can use things you learned in fine arts and use it in any creative practice. I really hope more Muslim youth go into creative fields, not only visual arts, writing, and film making too, because all these types of media have a huge impact on society and are just as important as science and politics.

“Unseen/Seen”is made up of three separate series of work which are all meant to play off of each other and interact within the space. I use paint and photography to explore the concepts of identity and the erasure thereof of veiled muslim women in western society. The work involves ideas of the seen and unseen, ideology versus identity, and the desire to uncover what is covered. By taking two different approaches in combing paint and photographs I seek to create a tension between the varying perceptions of women who wear the hijab - views that are applied to them versus the views they hold of themselves - through through a tension in mediums and presentation.

The women in the large portraits were initially photographed without their hijabs on (and their hair visible), only to have the paint act as an abstract replacement of the headscarf. These images were made through a process of painting on smaller photographs, and then scanning the painted works at a high resolution in order to print them at a much larger size, revealing more about the materiality of the paint than could be seen in the original. Similarly my aim in these portraits is to draw attention to the unseen aspects of a person, the vibrant colourful personalities that run deeper than their surface appearances.

In juxtaposition to these images my series of smaller portraits are preserved as unique art objects through the process of altering them with paint, creating a juxtaposition between the digital and the tactile, relating to the inward and outward perceptions of identity. This series questions the reactions that many have towards the hijab and the preconceptions that lead to the creation of a blanket identity thrown over a group of individuals based on the colour of their skin or how they choose to dress. The faces (identity) of these women are obscured by the cultural bias of those who are unable to - intellectually - see past a veil of cloth to the person beneath.

The final part of my installation acts as a physical extension of the ideas expressed in the rest of my work. As it is constructed from material that has been used as headscarves, it serves as a tactile trace of the women who wear them, and the bonds that unite them. Viewers can pass through the veils physically - and metaphorically through the veils of their own cultural conditioning - to contemplate the work before them.