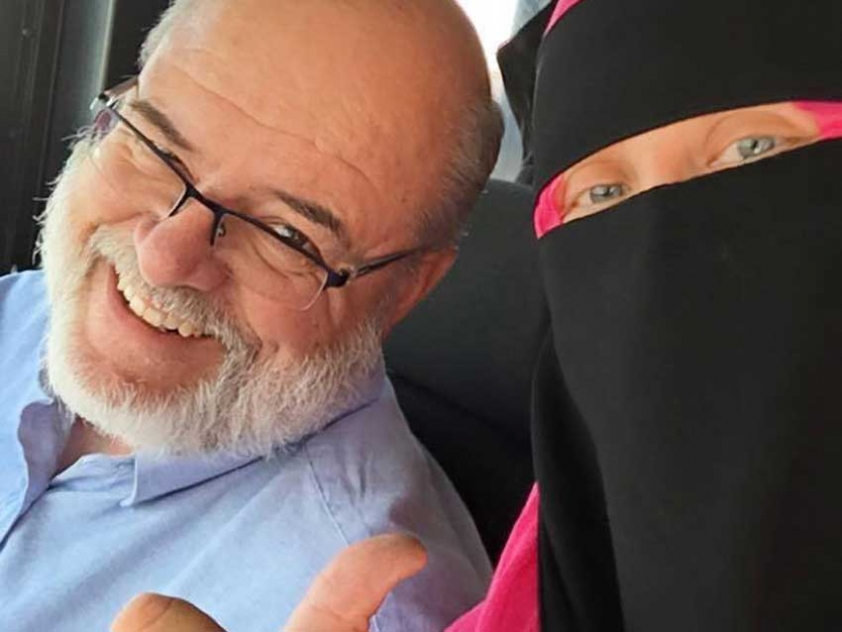 Hailey with the OC Transpo Bus Driver she would like to thank. Courtesy of Hailey
29
May
2016

Update May 30, 2016: OC Transpo has informed Muslim Link via Twitter that the bus driver has been identified and "kudos" have been sent to his supervisor.

Update May 31, 2016: The bus driver, Alain Charette, commented on this letter on Twitter. Subsequently, mainstream media such as CBC and Metro News interviewed Hailey and Alain and CTV also interviewed Chelby Daigle, Muslim Link's Editor in Chief. The Ottawa Police also retweeted the story. Muslim Link is very pleased that we had the opportunity to help Hailey bring this story to the public and to get Alain the recognition he deserves.

My name is Hailey. I am a 20 year old revert (convert) to Islam. I accepted Islam about 3 years ago, Alhamdulillah (Thanks to God). I am currently doing a double major in Spanish and French as a Second Language, and hope to become a translator, Insha’Allah (God Willing).

Since wearing the niqab, I have not had to face many challenges, Alhamdulillah. The main challenge is having parents that aren't necessarily happy with my choice, although they still let me wear it. I began wearing niqab in October 2015 and did not receive much criticism at all. My first week of wearing it, a man screamed out of his truck window at me, verbally abusing me and swearing at me. I shrugged it off, and not much else happened for months after that. Yes, people stare at you, but that's just curiosity and it's natural to be curious, so I don't mind it.

The day of the bus incident was just another average day. I had been getting a lot more stares and people making comments about me since the warm weather kicked in and I was beginning to stand out a lot more amongst the women wearing sundresses and shorts. That day I decided to wear pink. I said to myself, "Pink is a fun colour; nobody can hate pink."

I was heading off to the Rideau Centre to do some shopping. I hopped on the 118 as usual, and as soon as I took a seat near the front of the bus, I heard a man making snide remarks to the other passengers around him: "She could be a bank robber or something and we don't even know!" Filled with rage, I decided to confront him. I whipped around in my seat to face him, sitting a few seats back. I said: "If you've got something to say, then say it directly to me." We spoke a bit and he resorted to calling me such things as a terrorist and a freak. At one point, he even screamed at me to “assimilate”.

The man assured the bus driver that there was no problem and that he "loved everyone, including Jews, Christians, and Muslims". The bus driver informed him that he had called the police. The man quickly panicked and decided to get off of the bus.

After the incident, I decided to wait until the final stop to thank the bus driver. I told him how much his act of courage meant to me. I asked him if I could take a selfie with him, as I wanted to raise awareness that these things happen, and that Islamophobia is still a big problem within our community. He laughed and smiled and agreed to take the picture.

Yes, I managed to get a selfie with him, but unfortunately forgot to get his name. The whole ordeal of asking a stranger to take a selfie with you was awkward enough, and so I quickly left afterwards and totally forgot to ask his name. However, I hope that OC Transpo will see this article and will give this man the recognition that he deserves.

I want this bus driver to get recognition for his act because often times it is easy to just sit around and wait for the situation to blow over. Earlier on in October 2015, when I was wearing only a hijab (headscarf) and no niqab, a similar event happened on the bus. A drunk man sat behind me and began to blame me for the acts of terror around the world. The bus driver ignored the situation and a few other passengers were there to help me out instead, also forcing the man to leave the bus.

It's very easy to be a bystander in situations like this, particularly as a bus driver, but the bus driver I want to thank responded quickly and professionally to the situation at hand. He deserves to be recognized for his courage.

I am extremely grateful for his actions because it lets me know that there are still good people out there who are willing to help a person in need. Islamophobia is a real problem that many Muslims face each day, and this bus driver was able to look past my veil and past my beliefs to just see another human being in need of help. He didn't think twice, he just responded to my need, and in a beautiful way. For that, I am deeply appreciative.