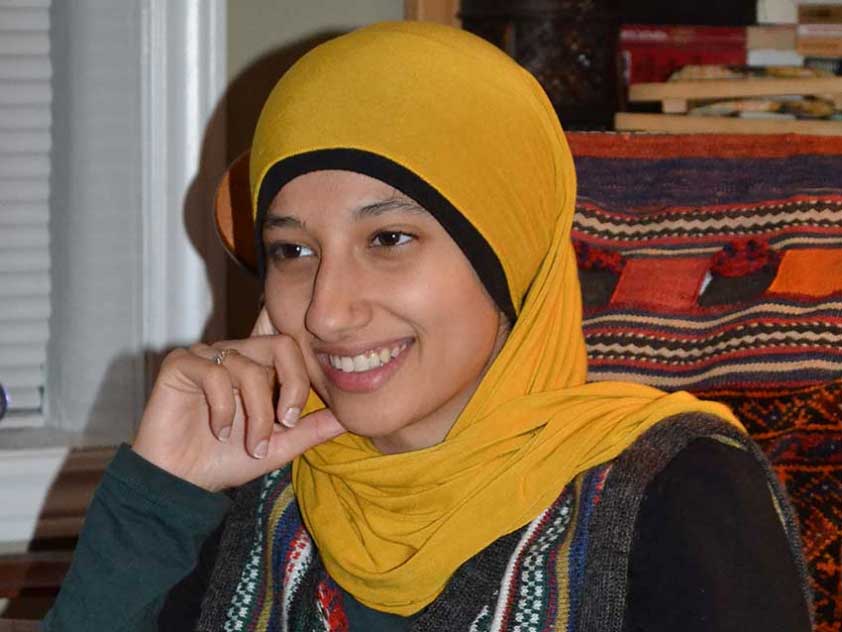 So You Want to Go to Law School? Assma Basalamah

Muslim Link’s new series “So You Want To…” interviews students and established professionals for advice and reflections on their various fields of study and professions, with the aim of helping other Muslims aspiring to join those fields.

In this article, Arab Canadian law student Assma Basalamah discusses her experience as a law student in Ottawa.

I'm 22 years-old. My ethno-cultural background is quite the cocktail: While my father is a second generation Swiss, my mother is first generation Syrian. My ethnic background from my father's side is half Palestinian and half Yemeni, born and raised in Indonesia. While my ethnic background is confusing, the nomad lifestyle still definitely runs deep in our blood. I went to fourteen schools in my 13 years of primary and secondary education on three different continents, which means that our socio-economic background was relative to our environment and different life circumstances.

Why did you want to attend law school?

Attending law school was a means for me to translate theory into action. Having spent two years studying Political Science, and knowing the role that the law's gearing plays in the state machine, I saw law school as an opportunity to make my academic journey more holistic.

I wish I had a better idea of the orientation that the different law schools have, some being more practice-based and others being more geared towards legal studies, i.e. legal theory and legal philosophy.

What barriers, if any, do you feel someone from your particular background might face when attending law school?

Solely based on my colleagues from law school's experiences it is clear that Muslim, as well as Arab-Christian students are met with greater difficulties in being selected for second interviews in competitive selections for intern positions. Also, being from an immigrant background, it is less likely you have family/family-friend connections with established lawyers in Canada.

However, there is comfort in the growing numbers of students who are no longer relying on large firm experience and seeking alternative means of gaining experience (ex. small firms). There is also an increasing number of visible minorities in the profession who are seeking to pave the way to a strong network for students looking to gain experience, who like them, faced barriers along the way.

I think that while one may complain that being a conservative Muslim comes with the difficulty of integrating social spheres in law school, which are almost exclusively set in bars and at cocktail parties, I always remind myself that these spaces are not uncomfortable because of the alcohol, but because of the culture that surrounds them. Many of these events are hosted by large firm employers, which undeniably look for lawyers who ethnically merge into the 'faces of the firm', which target a richer strata of society as clientele, and whose lawyers’ socio-political views are more likely to be diametrically opposed to mine than not.

Describe what level of law school you have just completed and what advice you would give to students going into that level.

I have just entered my third year in Civil Law and am applying for the Canadian Program, which allows students with a background in one of the legal traditions in Canada* to do an intensive one year in another legal tradition. By the third year, most students have an idea of the area of law that they're interested in; it is important to delve into your field by taking as many courses related to it, and by communicating your interest to professors who can be helpful in reorienting them.

Have you done any grassroots activism/community work with your law skills? If so, describe it and the impact you hope it had within the community

I've done some pro-bono work at a shelter in Gatineau, which I hope has provided its administration with adequate research and advice regarding ways in which a safer space can be provided to the vulnerable clientele of the centre.

I had the wonderful opportunity of contributing what I've been learning and synthesizing in law school by teaching part of a law class to high school girls at Tarbiyyah Learning. Every class, after laying down the foundations of the mechanics of law and how things are supposed to work, I would put my Critical Clown Nose on to discuss some realities of the judicial system. A story that captivated the girls was that of Mohamed Harkat and the plight of Sophie Harkat in advocating for a fair trial for her husband, in the face of the Courts' denial. On the last day of class, Sophie Harkat came to share her story and to answer our questions on the case and the constitutional problems associated with security certificates. I think that the headlines which are very relevant to our community can clash with the ideas that are commonly laid out about our justice system and that unless we start seeing “Justice” as a work in progress, we cannot become contributors to it.

What challenges do you feel you will face in your current level of law school?

Being in my last year, it can be difficult to juggle school, work, and the bureaucratic labyrinth of applications for internships and complimentary programs.

There are informal networks, which are in my opinion insufficient, because they re-create a preference for personal connections rather than competence. I think we should create alternative spaces of social networking of/for Muslim lawyers, considering that the key to independent work or the establishment of one's own firm is finding like-minded partners.