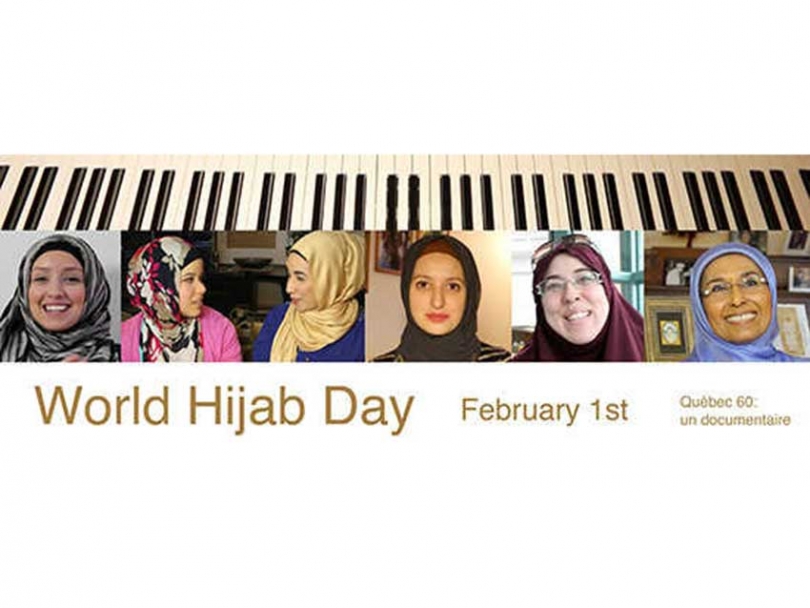 Syrian-Canadian George Karkour's documentary, Quebec 60, explores the experiences of Muslim women who wear hijab in Quebec. In honour of World Hijab Day, he created this banner showcasing some of the women he interviewed.
01
Feb
2014

As World Hijab Day is wrapping up, many of us who are advocates of religious freedom in Canada are grappling with outrage at how the tragic death of Naima Rharouity has been covered in some media.

Certainly, the hijab has come under increased scrutiny, thanks to the highly controversial values charter, proposed by the PQ government. The charter, which aims to enforce a rigid form of secularism within the province, has already been blamed for mounting abuse and harassment of Muslim women. Whether or not this law is passed, the coverage and subsequent reactions to Naima Rharouity's death further indicate that the floodgates of hatred towards Muslim women have already been opened. Every Muslim woman in the province, and possibly beyond, will be affected negatively by the racist and patriarchal discourses playing out during hearings on the charter at Quebec's national assembly.

To understand just how comfortable people have become in expressing racist sentiments, check out blogger Mathieu Charlebois's compilation of the horrific and insensitive comments made on social media about the tragedy in the post Histoire de foulard http://lerecherchistemasque.tumblr.com/

Comments include: "She deserves it", "that's one less terrorist to the world" and "better choose your religion wisely next time". But what was really shocking was how some media sources, including TVA, Journal de Montreal, and Sun News emphasized that the woman died because of her hijab, even though it wasn't clear at the time whether it was her hijab or her winter scarf that was caught, as if somehow, the reality that a Muslim woman might wear a
hijab and a regular scarf in Montreal hadn't occurred to anyone.

Other news sources, such as CBC, focused on what was floating through a lot of our minds when we first learned about the incident, like “I go on escalators all the time, that could have happened to me”. Coverage included reflections on previous incidents of deaths due to articles of clothing being caught on escalators and the need for further inquiry into how such accidents could be prevented. To them it did not matter if it was a hijab that got caught when this could have happened to anyone wearing clothing that could catch fatally in this way.

Responsible journalism is something which I find myself becoming more and more preoccupied with now that I have taken on the responsibility of being the Editor-in-Chief of the Muslim Link. But although I am outraged by such blatant media bias, I've also learned to be cautious about reacting in an equally ignorant way just because I'm angry. Two wrongs never make a right and I have plenty of biases too which could skew how I report on an issue.

This World Hijab Day I am ever more aware of the need to fight for women's rights to wear hijab and be treated as human beings with dignity. I want to fight for my freedom to wear the hijab but I also recognize that many women in the world are fighting for their freedom to not wear a veil. Sadly, it is often convenient for us to ignore this, but if we want to be responsible journalists, we can't.

I live in a city to which women have fled due to religious oppression in Muslim-majority countries. I've had the opportunity to chat and reflect with these women, who often challenge me on my wearing of the hijab. I listen, even though I do not agree. I listen just as I want to be listened to when I wish to explain why I want the freedom to wear the hijab. I will never know what it is like to live their lives or experience what they have suffered, so I listen; just as I listen to Baha'i refugees from Iran or Christian refugees from Pakistan. If I'm just fighting for my rights, that's just self-interest. If I really care about religious freedom, I need to care about everyone's religious freedom. Otherwise, I'm a hypocrite.

We need to listen as much as we wish to be heard.  We need to be committed to religious freedom and social justice for others, not just for ourselves.  The Hoodies and Hijabs Movement sparked by the murder of American Shaima Alawadi, which was initially portrayed as a possible hate crime, was aimed at building solidarity between Muslim Americans facing Islamophobia and Black Americans reeling from the murder of Trayvon Martin. But when Alawadi's husband was charged with her murder, the movement fizzled out. Why? You can't drop solidarity movements just because the situation gets embarrassing or if emphasis on your own issues is lessened.

One of the most positive things that have arisen from Quebec's proposed charter has been the bridges built between religious communities there: between Muslims, Jews, Sikhs, and Christians. I hope that these bridges are sustained, even if the political landscape becomes more accommodating. I hope that we take the opportunity to challenge prejudices within our own communities about different faith groups, instead of simply focusing on how divisive the Parti Québécoisis is being, as if, we could never ever be so ignorant. The members of the PQ party are just human beings, with prejudices just like ours. The only way I could ever think to teach someone else to unlearn their prejudices is if I have sincerely begun to unlearn my own.

Chelby Marie Daigle is Editor-in-Chief of the Muslim Link.