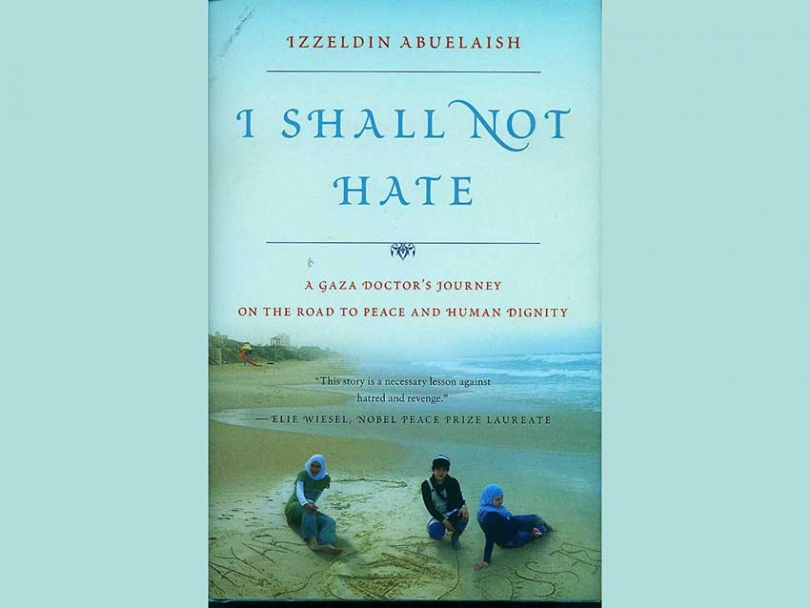 The physician lost his wife Nadia to leukemia in late 2008. While the family was struggling with this tragedy Israeli rockets tore into his house on Jan. 16,  2009, during an Israeli attack on Gaza, killing his daughters, 20-year-old Bessan, 15-year old Mayar, and 14-year-old Aya, and his 17-year old niece Nour. His 18-year-old daughter Shada and other family members were injured.

I Shall Not Hate is a moving narrative of Dr. Abuelaish's trauma, and successes, and those of the Palestinians. Without a trace of hate, the book seeks to inform the world about the festering dispute and to nudge it into promoting a just settlement. Dr. Abuelaish now lives in Toronto. His book was a best seller in Canada for about a year. He states that he has received positive responses from people who say that it changed their outlook.

On Jan. 4, 2011, it will be published by Bloomsbury in the United States and the United Kingdom in English, in Arabic, Italian and French in March and in Hebrew, German, Spanish, Dutch, Turkish, Finnish, Indonesian and other languages later.

“If I could know that my daughters were the last sacrifice on the road to peace between Palestinians and Israelis, I would accept their loss,” he states in his book. He has established a foundation in their memory to help the needy.

That's why he chastised me. I spoke at a Human Concern International fund-raiser to help Gazans. I said I was ashamed as a human at the cruelty, injustice, hypocrisy and double-standards in our world. “God favors the righteous,” Dr. Abuelaish declared, looking at me. “Don't relate acts of some Muslims to Islam, or that of Jews or Christians to Judaism and Christianity. Islam teaches peace and justice, as do Christianity and Judaism.”

“If I could know that my daughters were the last sacrifice on the road to peace between Palestinians and Israelis, I would accept their loss.” ”“ Dr. Izzeldin Abuelaish

He talked about his people.  “Gaza is looking for help. Gaza is in tears. Prevention is more important than treatment. The whole world is afflicted with injustice and suffering. Everyone goes through ups and downs. But for Palestinians and Gazans this is the norm. For Gazans there is no hope, only wars and need.”

“In a moment of craziness I might hate,” he declared. “But my religion doesn't teach me to hate. I don't want to be poisoned by hate. We must be outraged by injustice. But we need to work for a brighter future for all mankind.” He said that the Holy Quran and the Prophet Muhammad, may peace and blessings be upon him, advised us to control anger and be generous and forgiving .

His book speaks of the Gaza, blockaded since 2006 and impoverished, with 80 per cent of its 1.5 million residents living in poverty ”“ a people coerced, neglected, oppressed. “Thick, unrelenting oppression touches every single aspect of life in Gaza.”

The book tells the stories of Dr. Abuelaish and of Gazans. As a 14-year-old he had worked in an Israeli family's farm. As a physician, he served Palestinians and Israelis, the only doctor to work in an Israeli hospital. But he had to submit to security all the time and needed permits from stubborn Israeli, Palestinian Authority and Hamas officials.  As he notes: “It's hard for civilized people to believe what happens there ”“ the humiliation, the fear, the physical difficulty, the oppression of knowing that, for no reason, you can be detained, turned back, that you may miss a crucial meeting, scare your family into thinking that perhaps, like thousands of others, you've been arrested.”

He still has the ownership deed of his family farm. But now Ariel Sharon is listed as the owner though Dr. Abuelaish's family neither sold nor relinquished his farm. So he got up daily at 3 a.m., since he was seven years old, to support his family, go to school, and study at night. His family's two-bedroom house was bulldozed to make it easier for Israeli tanks to patrol. But Dr. Abuelaish never gave up, working, studying, struggling. He learned Hebrew, made Israeli friends and treated Israeli patients as conscientiously as he did his own people.

He quotes the November 2007 International Committee of the Red Cross:

“Palestinians face hardship in their daily lives; they are prevented from doing what makes up the daily fabric of most people's existence. They face a deep human crisis, where millions of people are denied their human dignity. Not once in a while, but every day, and the people of Gaza are trapped and sealed off. The humanitarian cost is enormous, people can barely survive ” and Palestinians are being trampled underfoot day after day.”

During the 23-day Israeli assault on Gaza in December 2008-January 2009 Israel barred journalists from Gaza. So Israeli and world media started phoning Dr. Abuelaish for first-hand information. On Jan. 14, 2009 a tank pointed its guns at his apartment. Dr. Abuelaish called Israeli journalist friends and said that the tank could kill him and his family. The tank moved away.  A little later rockets whammed his apartment killing three of his daughters and a niece and gravely wounding another.

Dr. Abuelaish hired an Israeli lawyer to ask the Israeli Defense Ministry for recognition and compensation. Such an agreement wouldn't bring back Dr. Abuelaish's daughters and niece. But it would place responsibility where it belonged. The Israeli Defense Ministry recently announced that though Israeli rockets killed the girls and it sympathizes, Israel does not accept responsibility.

Stunned, Dr. Abuelaish has asked his lawyer to launch a suit. Dr. Abuelaish's Israeli attorney Michael Sfrad declared that the Defense Ministry's decision demonstrates cruelty and insensitivity and lacks wisdom. “The State of Israel will suffer an immense blow from such a lawsuit and eventually it will have to pay compensation. I am not just angry as Dr. Abuelaish's  lawyer, I am ashamed as an Israeli.”

However, Dr. Abuelaish told the Israeli paper Yedioth Ahronoth that he still hopes for reconciliation and peace”. The situation will not change if we don't change something in our heart, thoughts and soul. We need to think of our children and our future. We must move forward, build bridges and get over barriers.”

As a Muslim and one deeply touched by Dr. Abuelaish and his book, I agree. There is far too much hate in the world. We must seek peace and justice for all peoples of the world.

Dr. Izzeldine Abuelaish will be reading from his book at the Ottawa Public Library, Metcalfe St. on March 5 between 2- 4pm. Please email This email address is being protected from spambots. You need JavaScript enabled to view it. for tickets and more information.