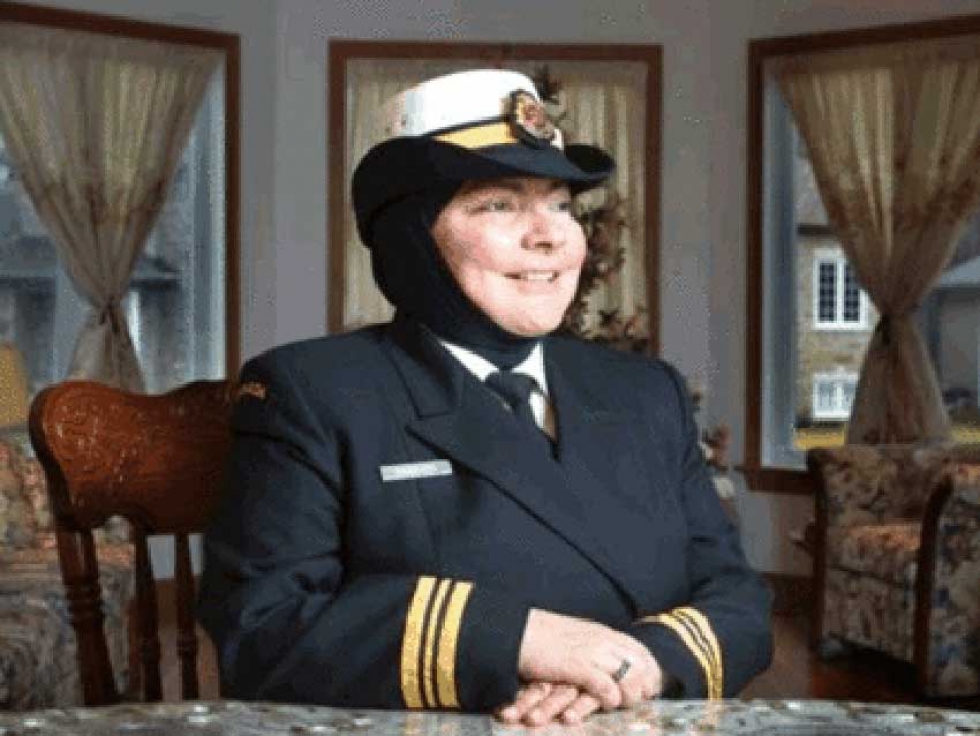 In a poignant memorial ceremony on June 11, the country and the Muslim community said good-bye to Lieutenant-Commander Wafa Dabbagh after she succumbed to her long battle with cancer.

Wafa made history when she joined the Canadian armed forces in 1996 wearing the hijab. Officers were baffled by why a practicing Muslim woman wanted to join, and wondered how her recruitment would work out. She won that battle easily -- everyone she met loved her friendliness. They not only accepted her, they embraced her.

When Wafa left this world, she made history again. For the first time in Canada, an official memorial service was arranged where the function began and ended with recitations from the Holy Quran.

Padre Captain Suleiman Demiray began by reciting from the chapter on the Family of Imran. He concluded by reciting Al Fatiha (The Opening, Ch.1). Both these passages from the Quran were translated and printed in the memorial service program.

The speeches illustrated Wafa's powerful impact. Rear Admiral M.F.R. Lloyd, Wafa's senior commander, stated that Wafa “epitomized the best of human qualities and inspired everyone.” He said she has made it easier for Muslims to join Canadian forces.

Rear Admiral Lloyd declared that he had never met a person who didn't like Wafa. Everyone loved her. A friend, Corporal Nesbitt, recalled that when Wafa learned she had cancer, she arranged a feast to share the news with friends.

Other speakers said her devotion to Islam increased their own faith in their religions and reminded them that we are all human. They said she always added “God willing” in her e-mails.

So highly was she regarded that when her superiors learned that she would probably lose her battle with cancer, they went to the hospital and presented her on behalf of the government the Queen's Diamond Jubilee medal, a prestigious award that marks the 60th anniversary of Queen Elizabeth's ascension to the throne. She was honored for “her dedication to duty, her cheerful spirit and for improving understanding between Muslims and the Canadian military.”

Rear Admiral Lloyd stated that they went to the hospital with heavy hearts but “left buoyed by her fighting spirit, her infectious good nature and her overall enthusiastic approach to life.”

Wafa, a Palestinian who was born in Egypt, grew up in Kuwait and moved to Canada in 1990 at age 28. She had two degrees but jobs are not easy to come by in Canada so she tried the military.

“The commanding officer sat me down and said ”˜I don't know what to do with you,'” Wafa recalled in a 2010 interview with the Ottawa Citizen. “He had called every branch of the forces and no one had a covered Muslim woman in their ranks. I told him, ”˜What you see is what you get, sir. I don't drink alcohol, I don't eat pork, but I can do everything else.'”

She wore a longer skirt and a loose, untucked shirt. But she worked with such enthusiasm that she was accepted and she advanced.

Wafa was a pioneer. “I want the Muslim community to know the door is open for them in the Forces. My experience has been 95-per-cent positive,” she declared in the Citizen interview.

“And I want other Canadians to know that there are people serving Canada who are not white with blond hair and blue eyes. We are all working together, white, black, Asian, Arab and Aboriginal.”

In addition to praying five times a day and wearing the hijab, Wafa followed the Islamic teachings of gratitude, kindness, integrity and good manners. Though she never married, she counted many colleagues and neighbours as family, and they loved her as well.

She recalls that when she asked to shower alone, her female friends stood outside the shower to guard and make sure nobody barged in. The cooks provided her pork-free dishes and her superiors gave her 10-minute prayer breaks.

Wafa was diagnosed with cancer in 2010. Chemotherapy and radiation weakened her but she kept working, and entertaining her colleagues and neighbours. She wished them Merry Christmas and they wished her Happy Ramadan.

Her lifestyle represented true Islam. Her colleagues' attitude towards her represented Canada's multiculturalism. She brought the two together in her life and death. Wafa died in Ottawa on June 5 at the age of 50. May Allah grant her paradise. Ameen.