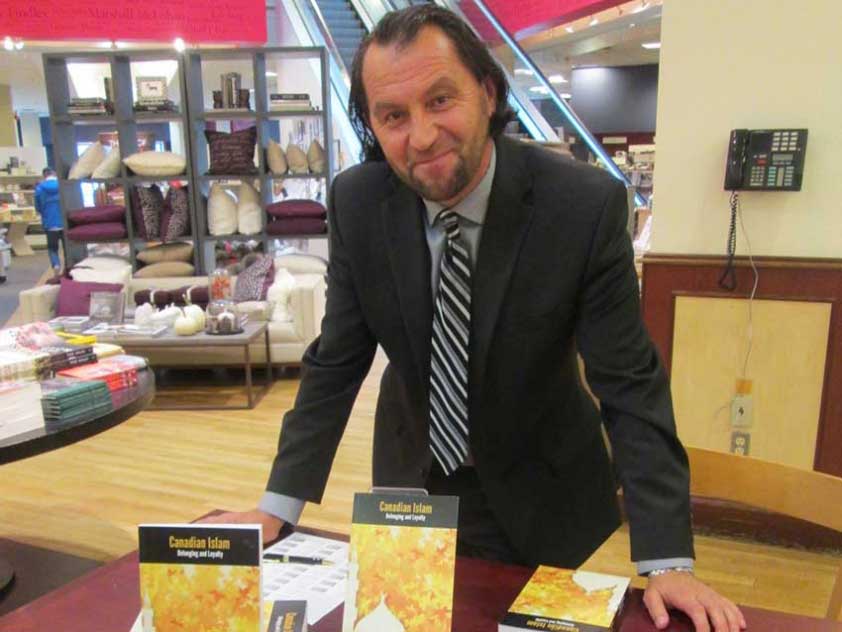 The book is divided into three parts. The first section is dedicated to exploring the rich demographic of Muslims living in Canada (did you know Muslims have been here since at least 1871?) and defining the sources and structure of identity. This part of the book goes into psychological precepts of identity development and it does an excellent job illustrating that "identity" is never a homogeneous, one dimensional entity. It is a complex tapestry of background, experience, and individual differences.

In that way the book rejects the notion that there is a distinct way to "be Muslim" and that that way is at odds with being Canadian. This reminded me of one of my favourite hadiths (sayings and traditions of the Prophet) by the Prophet (sws) when he proclaimed "I have not been sent except to perfect noble character." Because of this hadith, I view being Muslim not in an ethnic or nationalist distinctiveness but as a type of character—a Muslim is a person who is devoted, kind, forgiving, honest, humble, pious etc. because she knows that Allah is watching and judging her on her deeds and actions, not on her political and ethnic loyalties. We can have all of these characteristics—and have a duty to practice them in the societies we live in—as Canadians, Americans, Pakistanis, Chinese or any other group with which we identify.

The second part of the book focuses on integration models and presents the way Muslims are an integral part of Canadian society. Reading this section gives you a greater appreciation of the blessing of Canadian multiculturalism and the ease with which groups of all faiths and backgrounds maintain their culture and ancestral identity and simultaneously take on a new identity as Canadians.

But the book also cautions—indirectly—that the demonization of Islam is a barrier against Muslims fully integrating and identifying with Canadian society. At its heart, the book does nothing more than argue that Muslims are, in fact, human.

Each of us have different experiences and go through the same search for identity as every other human being. But we are in a climate where a book like Canadian Islam is needed to actually prove this to people. The concept of Muslimness—as it is understood now (a distinct and separate identity) was strengthened as a result of the discrimination and biased media coverage of Islam and the Middle East after September 11, 2001. By simplifying complex issues and historical contexts as being a manifestation of Islam's "backwardness", they made people of that faith feel like they had to choose one or the other. As a result, some Muslims sought ways to make openly claim their choice of being true to their religion—and that led to the adoption of cultural practices and fashion statements of countries that happen to have a Muslim majority.

What people need to understand, and what I think Canadian Islam illustrates excellently, is that people come to Islam (or any religion), or become "more religious" because they seek a connection to the All Mighty—not because they want to go to war, or because they simply—irrationally—"hate our freedom." The source of their identity is the belief in One God, the Creator and Master of all things, Who knows what is in your hearts more than you do yourself—something that attracts many people who have grown up feeling confused or misunderstood by those around them. But it is the discussion around everything else except this connection with God that leads Muslims to be radicalized and ostracized by society.

The final pages discuss the duty of Muslims to be faithful to their citizenship in Canada. This is the part of the book I found most intriguing and has the most important message for the Muslim community. In this section, Delic argues that our loyalty to Canada is actually an obligation under the Qur’an because it falls under the rules regarding contracts. Allah explicitly orders us to be true to our contracts with everyone—not just other Muslims. The book correctly defines citizenship as a form of contract—you swear an oath and sign papers that guarantee you certain rights and freedoms in exchange for your promise to respect the law of the government granting them to you.

The book gives excellent analysis about a famous ayah (verse) that we all know, but seldom contemplate:

"Oh Mankind, we have created you from a single pair of male and female and made you into nations and tribes so that you may know one another" Quran (49:13).

Having different nations and identities allows for exchanging of ideas and learning from one another which is essential for the progress of humanity. The thing we have to remember as present-day Muslims is that the concept of "nations" has become more complex than in the past, when your nation was the group you were born into.

Imam Delic gives a brief description of the various views of international affairs of the Muslim scholars throughout history. The original view, the binary world view of "Darul Islam" (Abode of peace)and "Darul kufr (Abode of the rejecters of faith)" was not specific to the Muslims, but was in fact the norm during a time when there were few other sources of identity besides your religious group (this was true for the Western, or Christian, world as well). "Citizenship", prior to the rise of the nation states, was defined almost entirely by one's religion. This made religion no longer about one's connection with God, but about political loyalty and land grabs. The concept of a nation—the reality in which we live today and which is a natural consequence of the progress and development of technology and society—is infinitely more complex than the world of the scholars of old.

The greatest thing we can take away from Canadian Islam is that if we want to help the Ummah , we must establish ourselves as prominent, politically engaged, and influential citizens here, in Canada. We can easily do this by using our characteristics as Muslims in the context of Canadian society. An obvious example is our fight for halal meat, which is about the humane treatment of animals and can easily be part of animal rights movements. In this way we will be a lot more beneficial to ourselves, to Canadians in general—and to the Muslim communities across the world.