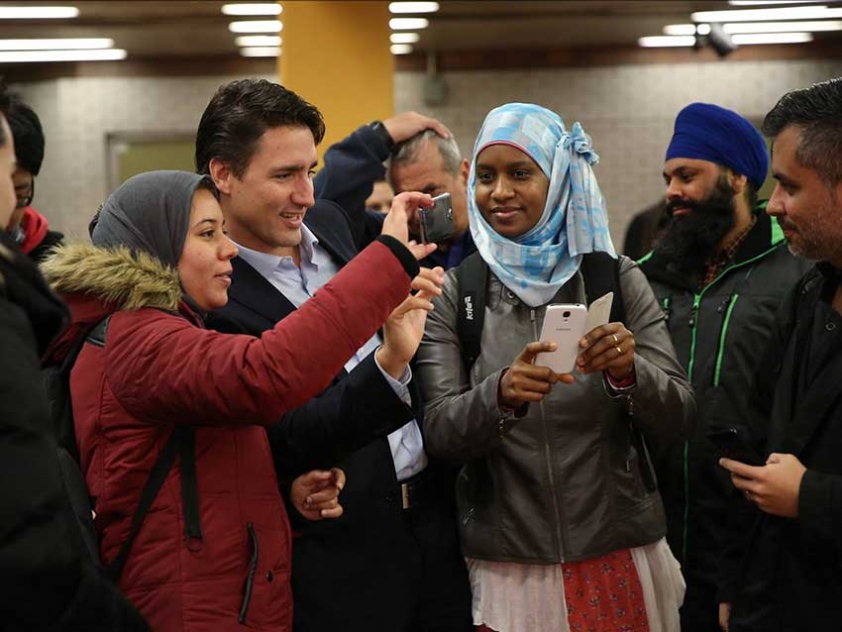 When I woke up this morning, I felt different. Today, there was a distinct difference in what it meant to be Muslim in Canada than it did yesterday.

The results of yesterday’s federal election, a sweeping majority win for the Liberal government, has reinstated for me a startling new sense of hope and optimism (even though I did not personally vote Liberal). I realized this morning that the last few years of Harper’s reign, augmented especially in the past months with heightened xenophobia by means of his steadfastly divisive politics, had actually affected me and the greater Canadian Muslim community in a deep and personal way.

As a Muslim woman, a Canadian-Iranian, I have dealt, from early childhood, with all of the complexities which come hand in hand with the paradox of immigration and of being part of a first generation immigrant family. These complexities have ranged from the struggle to establish my own Muslim Canadian female identity, my choice to wear the hijab and the struggle to understand how my government and greater Canadian society viewed me. And most recently in the past couple of years, the sudden desire to somehow prove that I did care about Canada, that I did want the best for my fellow citizens, that the extremist interpretation of my faith did not represent me and my community and that I wasn’t by any definition of the word, a terrorist. I guess I hadn’t realized until today how deeply this imposed defensiveness had impacted me in my daily life.

I came to the realization this morning as I made my way to work that I did feel different. I suddenly felt more at ease in this country I’ve called home and dedicated myself to for the past 25 years. That gnawing sense of uncomfortable awareness I had grown accustomed to on how my views and loyalties as a visible minority (of the Muslim faith) working as a public servant were being viewed by my government, was suddenly lifted. Idealistic optimism, perhaps, but a welcome respite from what I realized had become an unconscious sense of constant anxiety for me.

I have always had the belief that as Canadian citizens, our first and foremost duty is to our country and to safeguarding the very liberties that used to be a source of envy on the international stage. When I became a public servant, this duty for me became paramount, as I worked everyday for the betterment of Canadian society, its infrastructure, safety and security. But given the negative rhetoric that had been built over the past decade by the Conservative government, and the gradual but drastic marginalization of the Muslim community, I had started to develop an unsettling awareness that my government didn’t really believe in the authenticity of my loyalties to my country. It seemed apparent that the Harper government expected, via some distorted understanding of Islam, that as a Muslim Canadian, I stood in constant risk of spontaneous combustion of my moral and religious beliefs, of being oppressed as a woman or becoming radicalized as a Muslim. I was, therefore, considered a constant walking, breathing threat to Canadian safety and society. What I saw as freedom in religious expression like the niqab (which is not a requirement of Islam and which I personally do not agree with BUT accept as a form of peaceful religious expression protected under our Charter of Rights and Freedoms) were identified by my government as Barbaric Cultural Practices. Whereas I had before been recognized as an active member of my community and as a Canadian citizen, I was now considered a second-class citizen with the possibility of being stripped of my citizenship should the government deem it necessary. The roots that my family had planted into Canadian society and worked to make a home with love, hard work and dedication, were uprooted and unearthed, with little regard of how this would impact my family and our developed and cherished sense of citizenship. It was a climate of hostility, doubt and negativity that I hadn’t realized had become such a big part of my existence until now and which I am just beginning to realize, might have had adverse effects on my career development and advancement within the federal public service.

I think our duties as citizens of this country has only begun. Voting for change is one thing, but lobbying for it, tracking electoral promises and ensuring they become a reality, is the true essence of citizenship. I am a Muslim Canadian, and to me this duty is now of even higher importance, as we work to ensure that Canada steers clear of the darkness, racism and the politics of hate which has shadowed our communities in the past decade – that we remain an inclusive, fair and transparent society that works as a united front towards the establishment of justice and equality for all Canadians. It is our duty to be engaged, to contribute to the dialogue and richness of Canadian society and to hold our elected officials accountable. I hope that this new chapter will be one of enlightenment and justice for all of us, but especially for those less fortunate within our society and those, like our First Nations brothers and sisters, who have suffered tremendously from a government which had systematically denied them their basic rights and freedoms. They are the ones whose voices desperately need a solid platform for expression.

Mr. Trudeau made reference, during his victory speech last night, to a Muslim woman wearing a hijab who held up her little girl to him and expressed gratitude for giving her a chance to choose what she wore as a woman and to be lifted from the ranks of second class citizenship. This meant a lot to me. It is a moment that has become etched in my mind, as both a woman and a Muslim citizen of this country, as a turning point in the climate of Canadian politics because I had sadly forgotten what it meant to be acknowledged and respected by my Prime Minister. Justin Trudeau’s statement for me represented the empowerment of my community in allowing us to shape, through our actions and citizenry, what it means to be a Muslim Canadian. And so for now, I am hopeful.