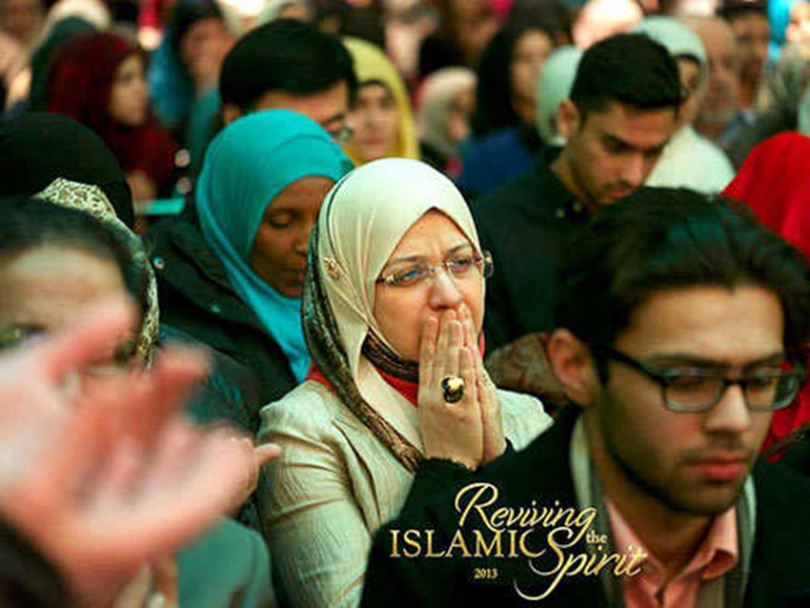 RIS 2013: A Call to Spiritual Activism

The 2013 annual Reviving the Islamic Spirit (RIS) conference, now in its twelfth year, boasted a line up of some of the most renowned Muslim scholars, intellectuals and contemporary philosophers of our time. A uniquely youth effort, RIS aims to “promote stronger communal ties within North America and beyond.”

Attended by a record breaking 25,000 attendees this year, the convention aimed to address pertinent issues relating to Muslim youth and inculcate a strong identity that is true to both faith as well as the modern realities manifesting itself within North American society.

The theme this year, “Changing Our Condition: Rekindling the Light of Faith”, was complemented by distinguished speakers such as the Swiss academic, Professor Tariq Ramadan, the American Islamic scholar Hamza Yusuf and legendary Iranian Philosopher Syed Hossein Nasr.

I was given the opportunity to attend the convention and was rather impressed with the high caliber of the speakers and relevance of the topics they explored. The highlight for me however was easily Dalia Mogahed; the American scholar of Egyptian descent who spoke without reservation, delivering a speech that was both frank and empowering. As the writer of the groundbreaking book, Who Speaks for Islam? What a Billion Muslims Really ThinkMogahed addressed some of the most relevant issues affecting the Muslim community in the West. She began by differentiating her approach from other speakers by reflecting primarily on the question that concerns non-Muslims the most: Are Muslims a threat? Are Muslims, as she put it “a benign or malignant tumor?” one to be removed and eradicated, or monitored and kept in isolation? Mogahed however argued that “we are answering the wrong question”. “Muslims are not a tumor ”“ we are a vital organ of our societies” and as such hold “great responsibility” in the successful growth of our communities.

Mogahed's thoughts were echoed by Professor Ramadan whose speech conveyed a direct and unapologetic message: true intellectual revolution among Muslims is not only required, it is a necessity. In order to maximize the potential of inter-faith collaboration and recalibrate the harmony that is characteristic of a healthy society, Muslims must actively “build cultural bridges” and aim to be “a gift” to their societies, Ramadan explained.

“Muslims are not in the West by accident,” he said, calling on the need to balance our spiritual responsibilities along with the necessity to be fully involved citizens of our communities. We must “find brothers and sisters who are on our side who are principled, and not only Muslim” he said. Ramadan's message, delivered in the lilt of his renowned prose, called for a spiritual activism that is based on some of the core principles of the Islamic faith: the jihad against poverty, injustice and oppression.

Ramadan called on Muslims to actively pick up the cause of the less fortunate within the national and global community. Whether it is to stand in solidarity with the Aboriginal struggle, or the fight against violence against women, or efforts towards the eradication of homelessness, the need for engaged citizens presents an opportunity for Muslims to step up to the plate. This is our opportunity to dissolve tensions and stereotypes through philanthropy and social change.

What appealed to me the most is the acknowledgement among all the speakers that Muslims as a people have been especially targeted in the past decade and that Islamophobia is indeed a real social phenomenon. However, as Ramadan said, “this is no excuse to play the victim”, but rather an opportunity to “reach outside ourselves and form inter-faith alliances in the service of humanity. “

But how can we do that? As Muslim North Americans what are the ways we can acknowledge our shortcomings and work towards the collective improvement of our society? Some of these answers were provided by Syed Hossein Nasr, which he delivered in his metaphysical approach to Islamic philosophy. In a speech entitled ”˜The Sacred Science and the Environmental Crisis”, Nasr explained that the environmental crisis is a direct reflection of the spiritual crisis of humanity. “We have neglected sacred science, where everything is rooted in the divine, and embraced instead solely modern science, which has plundered our land and natural resources”. A balance between modern science and sacred science, which is a moral based science of decision-making, is what is most required, Nasr explained.

In order to achieve this, Nasr suggested that Muslim communities in North America must work together to create “real Islamic education”, where this is taught authentically. One example of such institution is Zaytuna College of Liberal Arts, founded by American scholar Hamza Yusuf which “aspires to revive the sciences of Islam and to position this nuanced, text-based tradition in its central place in modern Islamic tradition”.

So whether it is through continuous liberal education, charity work or spiritual activism in the fight against societal injustices, Muslims have the potential to bring about some of the most necessary developments in North American society. Mainstream Islamic tradition has always harbored the most profound respect for scholarship and sanctity, and as Muslims, we are the catalyst to reviving this Islamic spirit. “Get involved in local politics,” Mogahed said, pick up a worthy cause and remember that what Islam needs now are “moral leaders”.

Alongside the scholars and academics present were also current political figures from all three levels of government who each addressed the crowd with their respective message. Interestingly enough, MP Kristy Duncan and MPP Charles Sousa both highlighted the accomplishments of the Muslim community with the charity work they have undertaken. This struck me as a source of notable recognition. Whether organizing food drives or fundraising community programs we all can be “gifts” to our communities.

My take away from this conference was strong yet simple: the spiritual activism our society needs must be a responsibility we as Muslims undertake with pride. In our daily fight against extremism, we must reconstitute the balance of knowledge and revive the spiritual dimension of the human psyche. It is not enough to struggle for our own cause, but to struggle for the greater good of humanity. We are all vital organs in the body that composes mankind.

This sentiment was reflected in the words of Ambassador Shabbaz, who echoing the words of her father the great Malcolm X, told the crowd, “you are in yourself an Embassy”, and as part of the Global community, “is assigned with the task to protect the oneness of man kind”

RIS 2013 was a call not only for social change, but the inward peace that is attained when a life is dedicated to the service of others. As Muslim youth, we are the foundation of the cultural bridges we so desperately need to build. So volunteer with your local charities, get involved with the office of your Member of Parliament, and practice your democratic right to speak against social injustices and fight for equal rights and opportunities for all.

As the Prophet (PBUH) said,  “The ink of the scholar is more precious than the blood of the martyr”. So write, contribute to the dialogue, be the catalyst for change and the medium for the success of interfaith collaboration ”“ all of which will lead to the transformation of our global community into a global family.