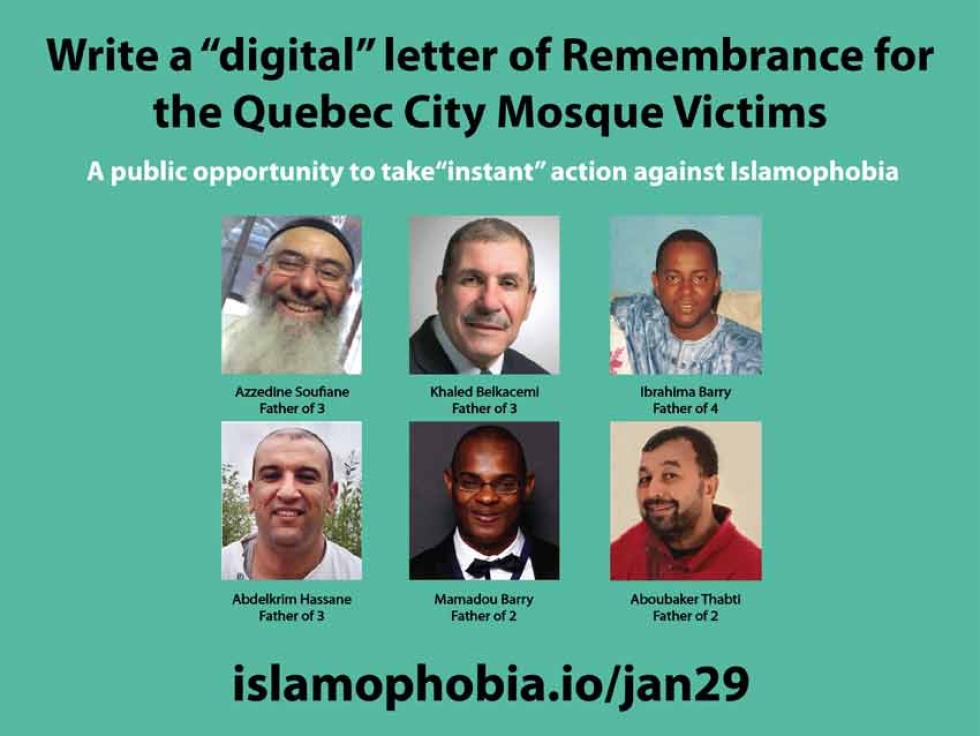 Write a Digital Letter of Remembrance to Quebec City Mosque Victims at Islamophobia.io

Pakistani Canadian author, filmmaker, and creative producer @studentasim has developed an online platform to combat Islamophobia by showcasing the voices of Muslims and their allies.

This year, for the 5th Anniversary of the Quebec Mosque Shooting, Islamophobia.io is collecting letters of remembrance to mark the occasion.

My parents are Pakistani immigrants. My father came to Canada to study, and then decided to stay. I grew up in Toronto and remember having some of the most amazing teachers. And then I met a new kid called Faisal Shaikh in grade 7, we were best friends, but I lost him just over a decade later. He allowed me to see new things. I got into creative work because of him. It’s time to be a student again. It’s time to explore.

Tell us about how you came up with the idea for Islamophobia.io. Why do you think showcasing personal stories is key for combating Islamophobia?

I’ve been exploring storytelling since 2011, when I released my first book, Khadijah goes to School. Even though I have so much more to learn, I found that there is a space for me too because some people connected to my stories.

About 10 years back, I piloted a project where I collected Ramadan stories. I was supposed to release it at the beginning of Ramadan, but I was up all hours of the day and night trying to code it, and almost all of Ramadan disappeared! But I got it out just in time and I received some really incredible stories from people in Canada and abroad. I always remembered those stories because they were so telling, and that for sure, it was the kind of stuff that would touch people.

So Islamophobia.io has been in my head for a decade since then. I was actually supposed to release it 2 Ramadan’s ago, but I went through a lot of different revisions of the site and myself, to get this out. But I’m glad I did because that Ramadan feeling is back. I’m honoured that people have taken the time to submit stories. It’s a young project but we have some really awesome stuff.

What Why do you feel it is important to include both the stories of Muslims and also non-Muslim allies?

I’ve seen it time and time again in the work that I do that our experiences overlap. It’s just that there needs to be that thing in the middle, that helps us do the overlapping. My books are like that, my cultural mural with 400 icons is like that, and so is Islamophobia.io.

I think people are looking for ways to work together, and when they find them, it’s an opportunity to build together, and learn. I think art is one of those examples where we can meet, and learn from each other.

I was at the vigil in London, ON. after the June 2021, terror attack. I saw a sea of people that were out, that cared. I really felt their presence. And I thought, wow, we need more opportunities to see each other. This is the philosophy at Islamophobia.io. I know people from the wider public want to do something about Islamophobia, but sometimes it’s not obvious about what to do. I’m trying to make it easier.

If you have overlap with the Muslim community or simply want to stand in solidarity, this digital platform is designed to be available at your fingertips, and the act of you writing a story, can literally save lives.

Your platform has already been used to collect stories related to Bill 21. What has been the response to this?

I would love to collect a lot more Bill 21 stories. But the truth is, I’m doing this alone for the most part for now. But I have worked with some amazing allies though. Stuff like this requires a lot of outreach. If you’re reading this, and Bill 21 matters to you, tell you story!

Your next campaign will focus on the anniversary of the Quebec Mosque Shooting. How can people engage with the platform to mark this important date?

By writing a Letter of Remembrance for the victims. The act of writing your letter is action against Islamophoiba. Letters will also be a living memory of the victims, and also highlight how deadly Islamophobia is. Seeing is believing. The details will be telling.

But there’s something else. After the lights, and cameras go away, the letters will still be available the next day. And the next day, and every day after that. The — digital letters — will be read by people in the future, and continue to make change long after January 29th.

So far, what lessons have you learned from your experience promoting the platform and receiving stories?

There’s been so many! I coded the site myself, so lot’s of little coding things (and there’s still more to do). There’s website tweaks and outright new ideas from constantly thinking how to make the user experience better. Keep in mind, I’m not a guru at UX design, so I’m learning a lot as I go. Just things about outreach, trying to work with people, and thinking about the future of the site. One thing that’s emerged from this is the Opportunities page. I want to start curating stories, and tailoring them for different audiences.

An observation I made was some of the stories I’ve received have been exclusive just to Islamophobia.io. i.e. the contributors didn’t tell them elsewhere. They knew that this site was about outreach, and that is the core reason for telling stories. And I just found that interesting. It tells me some people believe in this, and it makes sense for them.

Last thing I wanted to say was Islamophobia.io isn’t just about Islamophobic stories. We have a lot of different story categories from love, poetry, pets, Ramadan, to more serious topics like bigotry, drugs, and Islamophobia. No matter what story you tell, it’s still related to outreach. Someone in the world will read your story and might realize something about Muslims and related communities.

Lastly, how do people stay in touch with you?