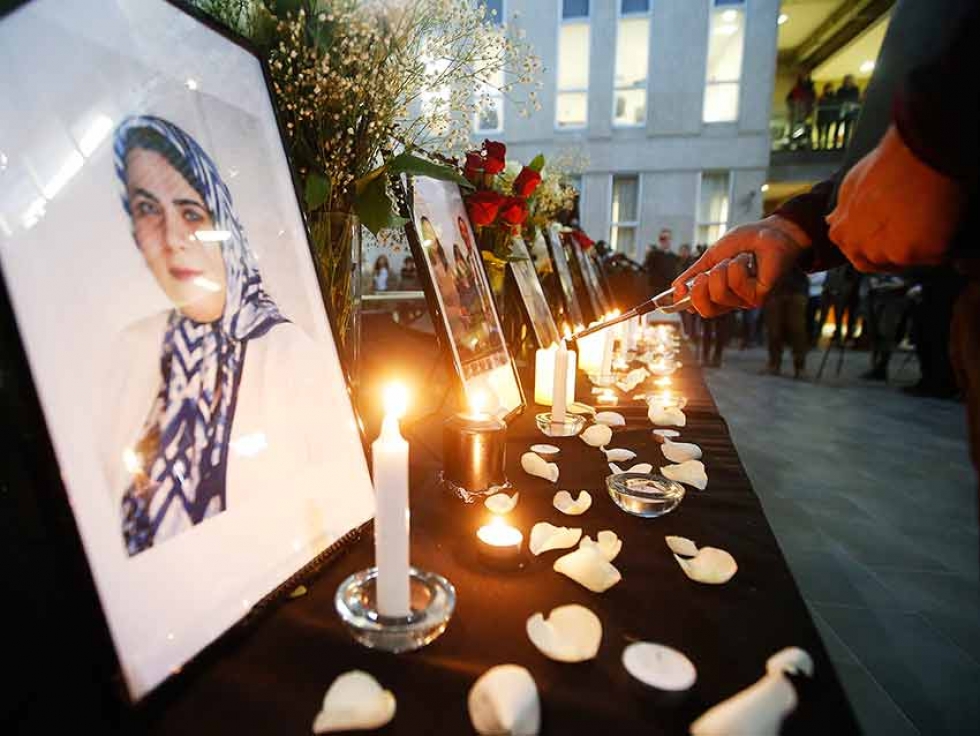 Candles are lit at a vigil organized for the Winnipeg victims killed on Flight PS752. THE CANADIAN PRESS/John Woods
19
January
2020

Will Flight PS752 Victims Be Remembered Differently Than Those Killed in the Air India Bombing?

There’s been an incredible outpouring of grief across Canada since Ukraine International Airlines Flight PS752 was shot down by Iran, killing all 176 passengers and crew on board.

We have learned that among the 57 Canadians killed, there were beloved students, professors, doctors and engineers. Children, newlyweds and entire families perished. Many of them have been described by Canadian news media and leaders as “exceptional.” They belonged to Canada’s vibrant Iranian communities and are being remembered as such in tributes and memorial services across the nation.

“Your entire country stands with you tonight, tomorrow, and in all the years to come,” Prime Minister Justin Trudeau told about 2,300 people who attended a memorial service in Edmonton on Sunday. “We share your grief,” he said on the day of the crash.

Trudeau called it a “moment of national pain” and recounted stories he’d heard from impacted families over the past few days, including one of a 10-year-old “who was confident he’d one day be prime minister of this country he loved so much.”

I’ve spent more than a dozen years researching public memory of another air disaster that resulted in an even greater number of Canadian casualties — the Air India tragedy.

Indeed, news of PS752 is triggering memories of June 23, 1985, when Air India Flight 182 fell into the Atlantic Ocean near Cork, Ireland, after a bomb hidden among the luggage exploded. All 329 passengers and crew on board that flight were killed. Among them were 280 Canadians, the majority from Indian-Canadian families, as reported by the official inquiry by Public Safety Canada.

Winnipeg resident Nicky Mehta was 13 at the time that her uncle, aunt and two young cousins were killed on the Air India flight. On the day after Flight PS752 crashed, she woke up to an abbreviated list of “deadly plane crashes that killed Canadians” published in the Winnipeg Free Press that did not include Air India. “I felt gutted,” she told me. “It was re-traumatizing to see that Air India was not even worth a mention here.” The article has since been removed.

Back in 1985, there was no collective outpouring of grief or statement of national solidarity for the victims of Air India Flight 182. Were these victims not “exceptional” enough? In fact, they too were beloved students, professors, doctors and engineers, as well as homemakers, teachers, civil servants and more.

Notoriously, Canadian Prime Minister Brian Mulroney offered his condolences to Prime Minister of India Rajiv Gandhi for India’s loss instead of addressing his own citizens.

It is clear that for many Canadians (not just Mulroney) the Air India bombing was unthinkable — and thus unmemorable — as a tragedy of national consequence due to the dominant assumption that Canadian identity is synonymous with whiteness. Indeed, critics as well as relatives of the dead have raised the obvious question: would there have been such trouble recognizing the bombing as a national tragedy if the majority of those killed were white rather than brown Canadians?

Now well-documented as the result of criminal trial proceedings and a long-awaited federally appointed Commission of Inquiry into the Investigation of the Bombing of Air India 182 are repeated instances where government officials, the Canadian Security Intelligence Service (CSIS), the RCMP and Canadian airport authorities ignored, disbelieved, erased and lost crucial evidence — including surveillance tapes of eventually acquitted suspects and warnings by the Indian government and Air India officials of an attack on the airline.

Relatives of those killed in the bombing of Flight 182 also testified to how the government failed to provide them with the most basic, practical supports in the days, months and years following the deaths of their loved ones, many citing compounded grief as a result of being treated like second-class citizens for their “Indian-ness.”

Sociologist Sherene Razack has said that although “there is evidence that some Canadian officials acted heroically,” systemic racism played a role in Canada’s pre- and post-bombing response or lack thereof. In her expert witness report for the inquiry, she observed: “When police, political and media elites all consistently treated the Air India bombings as a foreign event, it is not surprising that Canadians do not recall June 23, 1985. As a nation, we were not shaken, transformed and moved to change our own institutional practices for a tragedy we considered had little to do with us.”

It would take 25 years of lobbying by Air India families before the government of Canada would publicly claim their loved ones, as well as the suspected perpetrators, as Canada’s own.

Does the national mourning as a result of the tragedy of PS752 mean then that Canada has since changed? Are we befittingly shaken this time around? Other news reports are citing diversity and multiculturalism experts who think so, some claiming that there has been a “180-degree shift.” But I am curious to see how the victims of this tragedy (and those of the Air India bombings, for that matter) continue to be remembered in time.

Despite the fact that the Air India bombing is now referred to by public authorities as “the worst encounter with terrorism Canada has experienced,” or even “Canada’s 9/11,” most of my undergraduate university students have never heard of the incident.

The 35th anniversary of the Air India bombings approaches this coming June. It remains to be seen how long it will take for the Flight PS752 victims to be forgotten.

It also remains to be seen if the deaths of these passengers will be mobilized in the interests of increased western military involvement in the Middle East. Again I can’t help but think of the Air India bombings, and the ways in which the government of Stephen Harper strategically used the memory of its victims to bolster support for conservative anti-terrorist legislation; or more recently, conservative pundits who invoked the bombings over and over again to bait NDP Leader Jagmeet Singh before last fall’s federal election.

Nor am I convinced that Canada’s response to this recent air tragedy and the loss of so many Iranian-Canadian lives means racist reactions won’t still emerge.

Often during times of national crises and heightened political tensions, race-based fears and anxieties about foreign and/or domestic terrorism result in the intensified stereotyping of particular people and places as inherently threatening — as exemplified in President Donald Trump’s latest characterization of Iran as a “rough neighborhood.” To be sure, the potential for rising anti-Iranian sentiment in Canada also exists.

And so as further details of the tragedy in Tehran unfold and political players in and beyond Canada negotiate their stakes, I expect that public memory will shift along with it, including how the incident and its casualties are remembered and understood.

This is how public memory works: when new information and investments become present, we tend to revise how we make sense of the past.

The best we can hope for is that our practice of collective remembrance might become the grounds upon which those of us who were not immediately affected by the downing of PS752 — or the Air India bombings — join in memory and mourning with those who were. In doing so, we learn to live alongside one another in the aftermath of loss with renewed connection.

[ You’re smart and curious about the world. So are The Conversation’s authors and editors. You can read us daily by subscribing to our newsletter. ]

Dr. Angela Failler is Professor of Women’s & Gender Studies and Canada Research Chair in Culture and Public Memory at the University of Winnipeg. She is the Director of the Centre for Research in Cultural Studies, and teaches and supervises for the MA Program in Cultural Studies. Her research is focused on how practices of culture and public memory are used to grapple with the “difficult knowledge” of historical traumas and injustices, including their ongoing/after effects. Her projects pay special attention to memorials, museums, commemorative artworks, community-based practices of remembrance, and government sponsored memory projects. She employs interdisciplinary, collaborative methodologies that draw on the expertise of scholars, educators, artists, curators, and other cultural practitioners. She is the Principal Investigator of a long term in-depth study on public memory of the 1985 Air India bombings. She is co-editor of Remembering Air India: The Art of Public Mourning (University of Alberta Press, 2017) with Drs. Chandrima Chakrabory and Amber Dean.

Dr. Failler is also interested in phenomena at the intersection of culture, embodiment and psychical life and has published writings on anorexia and self-harm in this vein. Most recently, she has turned her attention to matters of representation and witnessing in museums as a lead researcher with the Thinking through the Museum network, co-leading the Museum Queeries project with Dr. Heather Milne (English). Dr. Failler serves as a Contributing Editor for the international journal Review of Education, Pedagogy and Cultural Studies. In 2012 she won the Clifford J. Robson Memorial Award for Teaching Excellence.