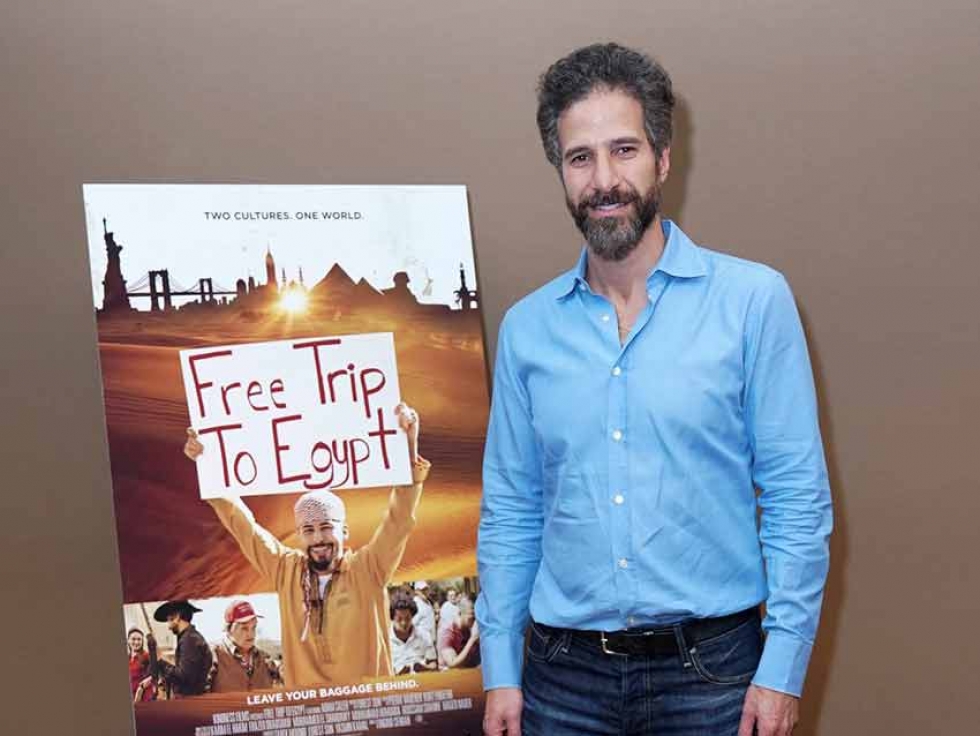 Why Did a Egyptian Canadian Send Trump Supporters on a Free Trip to Egypt?

Egyptian Canadian engineer Tarek Mounib decided to take admittedly Islamophobic Americans on an all expenses paid trip to Egypt for 10 days where they are matched up with regular Egyptians who show them around the country and take them into their homes.

Seven Americans accepted Tarek's offer including an Arizona single mom, a Kentucky beauty queen and born-again Christian, a former soldier, an African-American police officer who said he feared being taken hostage during his travels, a retired school teacher, and a Jewish couple whose son works in the Middle East.

This social experiment is recorded in the documentary "Free Trip to Egypt" which has made its Canadian Premiere at Bytowne Cinema in Ottawa, Ontario and is now screening in cities across Canada. Tarek’s fledgling film company, Kindness Films, was able to arrange six pre-screenings of the film across the U.S. last year, in New York, Los Angeles, Kentucky, Arizona, Washington and Michigan.

Muslim Link had the opportunity to interview Tarek about why he decided to take Trump supporters to Egypt and document their journey on film.

Tell us about yourself, ethno/cultural background, journey to Canada, education, and career.

Tarek Mounib: I was born in Canada to Egyptian parents, raised in a Muslim family, went to Carleton University, studied engineering, and then became a software developer, went through the ranks at Nortel Networks to become a senior manager. And then from there, I left Nortel, became a consultant, and then established my own software company in 2003. I established other companies, and then a few years ago I went down part time to dedicate myself to projects that I feel are more fulfilling. So there were a couple of projects that I was involved in before I started the film.

Why did you choose to bring these people to Egypt? Obviously you're Egyptian Canadian, but did you also feel that the country would be an ideal introduction for people who have misconceptions about Muslims to visit?

Tarek: One of the big reasons I brought people to Egypt is because I have roots in Egypt. I know the country well. I've done business with software companies there. I have actually brought American and European managers/customers to visit Egypt, so I felt very comfortable bringing Americans to Egypt.

I also thought about it and I felt Egypt is a very good example of diversity. I think you find a lot of differing interpretations of Islam and different people practicing faith, and you have also a very large Christian population, the Coptic Christians in Egypt. So I felt it's a good example of coexistence and the variety of religious and secular beliefs living together.

The participants had an opportunity to meet a diversity Egyptian Muslims, in terms of degrees of religious practice. Was that planned? If so, why did you feel this was important?

Tarek: I felt I wanted to give a view of the Egypt so I did want to have the diversity in the country reflected in the hosts. We did get a very diverse set of applicants that wanted to host, so we were fortunate to be able to have an easy selection process.

In the process of making the documentary, did you and/or the Egyptians involve, discover, and unlearn biases or misconceptions you had about Americans and/or non-Muslims?

Tarek: Absolutely. I think that was really the magic of the film is that we weren't trying to make the Muslims look good or educate Americans. We were on this journey together, learning together and breaking down our preconceptions - together. I personally remember having my own preconceptions of a marine at a Trump rally, what he would be like so when he came with us on the trip, he also really made me look at my own preconceptions of what he would be like, and he was completely different. He had actually had a tattoo on his arm, which was a biblical verse about love, and he was always talking about love of his brother, and that was his motivation of being a marine. He was the kindest person I ever met. So it really opened my eyes.

Many of the Egyptians as well learned quite a bit. They had their Hollywood view of what America was like, so to connect with Americans really opened their eyes. One of the mothers of one of the Egyptian hosts had never met a foreigner, so it was really beautiful to see her say how much she loves all Americans after meeting this one American. It was quite inspirational, actually.

What has been the Muslim response to the film?

Tarek: What's been amazing is actually everyone's response. I think whether you're a Muslim, a Christian, a Trump supporter or from the left, it's really brought people together. So, I think people feel seen. They also feel that they see another perspective of people that they didn't really interact with, so a lot of the Muslims came to me with a lot of gratitude saying, "Wow, it's so nice that we're portrayed in a human way, and I also learned a lot of things about Americans that I didn't know even though I'm living in America." That was really quite inspiring.

Tell us about Pledge to Listen month and how people can get involved with it.

Tarek: Well, after the film was created, we started doing screenings, and the first thing I realized about the screenings is how much it brought people together, and that inspired what we're calling #PledgeToListen. We had a #PledgeToListen Day of Unity in the United States on June 12th where thousands of people watched the film together, and then a panel discussion was streamed into the theaters from Washington DC, which was made up of thought leaders and politicians who just wanted to see more listening and kindness in the world after being inspired by the film. So, it really brought a lot of people together, and on that day we had people like Marla Maples, who is Trump's former wife, coming together with Congresswoman Tulsi Gabbard, who's a Democratic presidential candidate, along with a former Associate Secretary of State under President Obama, an advisor to Trump, Rabbi Rami Shapiro and many others. So it brought a lot of people together and really inspired people.

Many people wanted to do a follow-up, and in September we're going to do screenings across North America where people can organize a community screening or request a theater to do what is called Cinema-On-Demand. If they'd like, they can screen it in their own community center, mosque, church, etc. This is what is called #PledgeToListen Month. There will be hundreds of us holding these screenings across North America where people can have the screening and then have a conversation afterwards. So, if people want to get involved, they can just go to our website (www.freetriptoegypt.com), sign up for updates or sign up to host a screening, and they'll get all the information they need to know either about how to host a screening or where the nearest screening will be once it's announced.

If someone wants to organize a screening of Free Trip to Egypt, how could they?

Tarek: Just sign up to our website, www.freetriptoegypt.com, under host a screening, and then they will receive all the information they need to get things started.