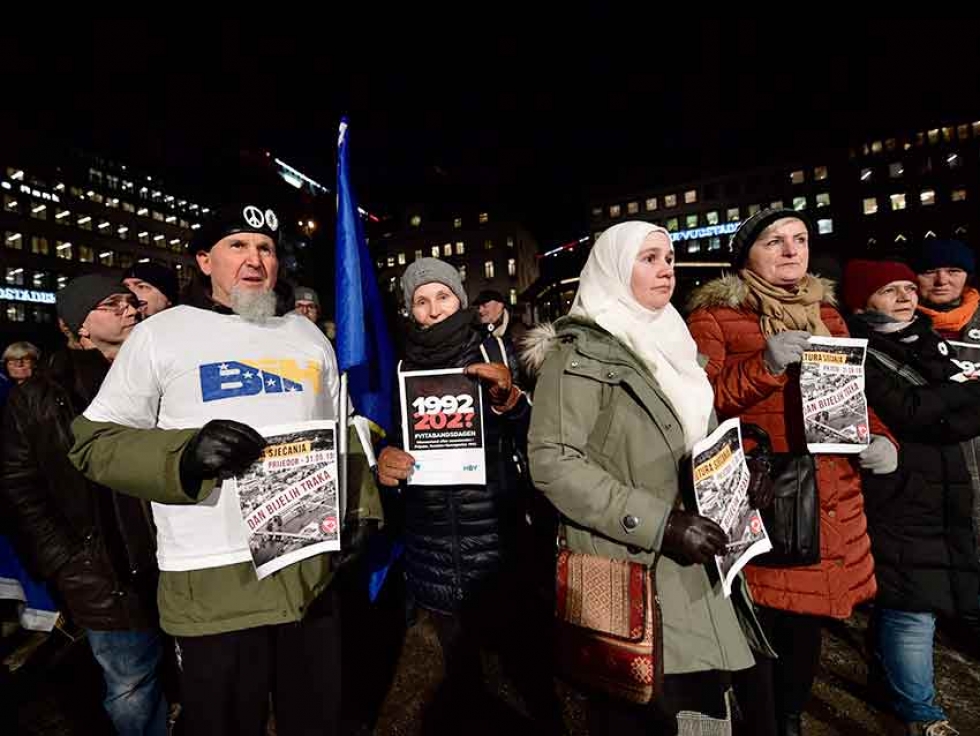 Demonstrators protest the awarding of the 2019 Nobel literature prize to Peter Handke in Stockholm, in December 2019. Stina Stjernkvist/TT News Agency via AP
03
Feb
2020

The Srebrenica Genocide and the Peter Handke Nobel Prize Controversy

Austrian writer Peter Handke received the 2019 Nobel Prize in literature. The award is for “a writer’s life work,” and Handke has written novels, travelogues, theatre plays, screenplays and poetry.

Hundreds protested the award ceremony at the Stockholm Concert Hall. This was not an isolated protest.

The announcement of the award generated public uproar.

Handke’s critics say some of his published work has advanced and fuelled genocide apologetics and they point to his choice to speak at the 2006 funeral of Serbian ethno-nationalist politician Slobodan Milošević. When Milošević died, he was on trial facing 66 charges including for crimes against humanity and genocide.

The controversy has spurred long-standing debates about where stories come from, who is responsible for them and what it means as a writer to bear witness to truth — and also, which persons or institutions have the authority to do so.

These events unfolded at a time of rising ethnonationalism across Europe.

The publisher of the English-language 1997 translation describes the book on its jacket as both a “sensitive and nuanced meditative travelogue through Serbia,” and a “scathing criticism of western war reporting.”

In the book, Handke writes: “all too many of the reporters on Bosnia and on the war there … are not only proud chroniclers, but false ones.” In his search for a “common remembering” he writes: “To record the evil facts, that’s good. But something else is needed for a peace, something not less important than the facts.”

Handke’s Nobel nomination particularly inflamed journalists and survivors of the Srebrenica genocide, where more than 8,000 Bosnian Muslim men and boys were killed in July 1995, during the 1992-95 war in Bosnia. Various intellectuals, as well as the broader public voiced their dissent about Handke receiving the award on Twitter following the award announcement.

The bigger context is that some perpetrators denied findings of the International Criminal Tribunal for the former Yugoslavia (sometimes referred to as the Hague Tribunal, based in The Hague, Netherlands) — and the tribunal documented atrocious strategies to conceal crimes, such as moving mass graves. Denials of the Srebrenica genocide continue today.

Media reported that Emir Suljagić, a survivor of the Srebrenica genocide who wrote Postcards from the Grave, said after the announcement of Handke’s award: “I am in Stockholm to protest the award being given to a man who negates my suffering and the suffering of so many others.”

During a press conference in December, Handke did not provide direct answers to questions about the controversy.

In an Oct. 10, 2019, press release, the Swedish Academy announced it had awarded Handke the Nobel for “an influential work that with linguistic ingenuity has explored the periphery and the specificity of human experience.”

Following the protests and uproar, both Swedish Academy and Nobel Committee for Literature members defended the decision.

Two academy members wrote in a Swedish newspaper that Handke had “definitely made provocative, inappropriate and unclear statements on political issues,” but added: “The Swedish Academy has obviously not intended to reward a war criminal and denier of war crimes or genocide.”

In an op-ed, writing as an individual, one of the members of the committee said Handke in his writing was “radically unpolitical,” according to a story from Agence France-Presse. British Broadcasting Corp. reported that another member said: “When we give the award to Handke, we argue that the task of literature is other than to confirm and reproduce what society’s central view believes is morally right.”

Suhrkamp Verlag, Handke’s publisher, circulated a defence of his work following the controversy, but did not release it publicly, journalist Peter Maass wrote in The Intercept.

Many statements in defence of the award echo earlier French and British 20th century literary criticism.

The French philosopher Roland Barthes’s influential 1967 essay “The Death of the Author” served to elevate literary work and its language. Barthes wrote: “It is language which speaks, not the author.”

For French philosopher Michel Foucault, the author is a kind of scribe who commits language to paper. The implication is that the author is writing down the realities of the world outside. In his view, “the function of the author is to characterize the existence, circulation and operation of certain discourses within a society” — meaning, ideas and messaging, as he elaborated in his 1969 essay “What is an Author?”

Before them, T.S. Eliot proclaimed in 1919 that writing “is not the expression of personality, but an escape from personality.”

As feminist literary scholar Cheryl Walker has noted, independence-of-the-text critiques have to a certain extent helped “liberate the text for multiple uses,” like re-reading canonical texts from critical feminist perspectives.

But such critiques have also been at odds with literary traditions on the margins.

Historically, the significance of lived personal and collective experiences have been central features of texts by women, Black, Indigenous and people of colour, queer or transgender writers.

These literatures, their readers and their institutions of criticism have long resisted calls to separate author, text and political or social impact. They have asserted either that the personal is political or that perspective is situational — and rejected the notion that literary work can considered unpolitical.

Critics of Handke’s receipt of the Nobel award challenge the notion that Handke’s literary work can be evaluated apart from its political implications.

Bosnian-American author Aleksandar Hemon has questioned what he calls the academy’s belief in a “literature safe from the infelicities of history and actualities of human life and death.”

PEN America issued a statement decrying the academy’s support for Handke, saying the body is “dumbfounded by the selection of a writer who has used his public voice to undercut historical truth and offer public succor to perpetrators of genocide.”

Among the alarming developments in the Handke affair has been the news that the award fuelled far-right ethnonationalist sympathies.

How or if the Swedish Academy will respond to these developments as the public demands it approach the award more cautiously remains to be seen. It seems unlikely that it will rescind Handke’s award.

But the academy is implicated in this affair no matter what.

The main geopolitical area for his work is Germany/Central Europe. In addition to this research, he co-founded the scholarly collective "Diversity, Decolonization, and the German Curriculum," through which I do language advocacy work.