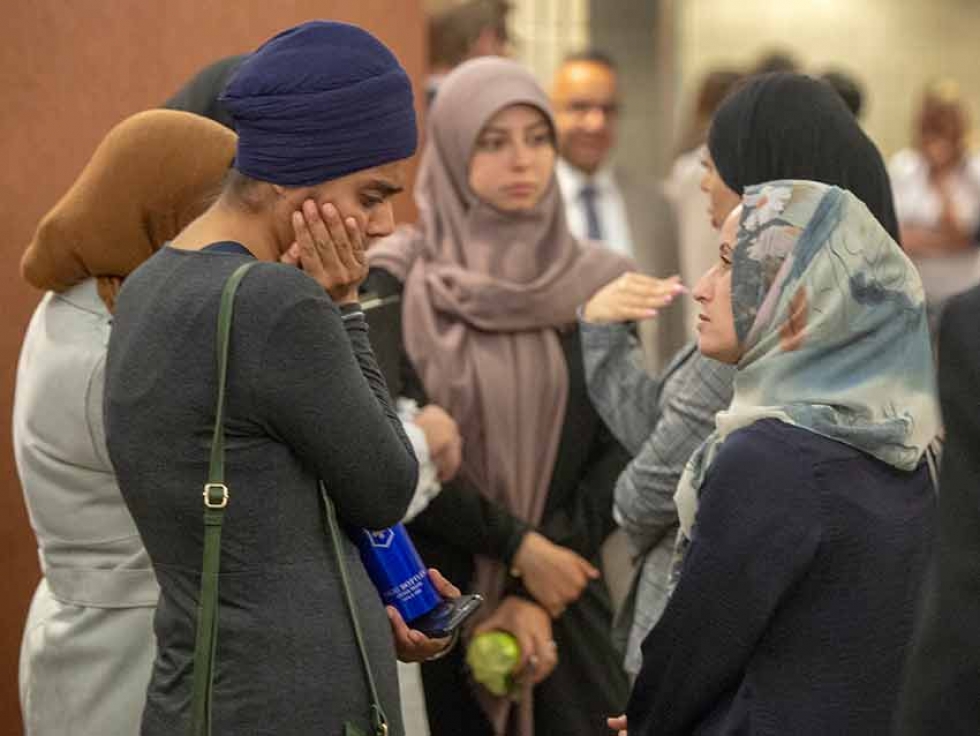 People wait to enter the courtroom for a hearing challenging Bill 21, July 9, 2019 in Montréal. THE CANADIAN PRESS/Ryan Remiorz
13
August
2019

The bill prohibits teachers, judges, police officers, prison guards and other public workers from wearing religious symbols or signs (signes religieux) at work. These are defined as including clothing, symbols, jewels, ornaments and accessories or headgear which is “believed to be related to a belief or religious belief or is reasonably considered to refer to religious membership.”

But the bill’s future, and its potential impact throughout the province — and its schools — remains uncertain.

As a researcher who has examined how learning about religious diversity can contribute to preventing hate and bullying in schools, I believe that banning teachers’, among other professionals’, religious dress is ill-advised.

My research and that of others who examine student development and how violence is amplified or prevented suggests that Bill 21 could negatively inform school environments.

A grandfathering clause aims to exempt currently employed individuals who wear religious dress. Yet, when school resumes in September, seasoned teachers who wear Muslim headscarves or Jewish kippahs may still be questioned if they go to work dressed as before. Some students protested against these changes during the past school year. How will they interpret this change in their school now?

The Coalition Avenir Québec government is ignoring Bill 21’s potential to promote social harm. This is evident through the education minister and the minister of immigration, diversity and inclusiveness’s support for Bill 21.

These leaders do not seem to see that political and legal decisions can shape a society’s cultural climate.

Researchers on bullying use Bronfenbrenner’s much-respected interconnected model to analyze the multiple social factors that can influence individual attitudes and behaviour. Some of these researchers found that publicly sanctioned behaviour, including behaviour condoned in law, informs social expression at the individual level.

Since the bill’s proposal, hijabi Muslim women in Montréal report an increase in harassment, including being spat on, having someone try to pull off their veils, intimidated at work or cyberbullied. Students may mimic such negative behaviours as political and social sentiments trickle into school settings this upcoming school year.

When both Québec and other western places have experienced large-scale Islamophobic hate crimes and white supremacist acts of terror, failing to draw links between interpersonal acts of aggression or violence and larger contexts is negligent.

Religious bullying happens when a power imbalance is created based on people’s perceived or actual religious or non-religious affiliation.

In 2011, the Public Health Agency of Canada estimated that approximately eight to 15 per cent of students in Canada experience religious bullying.

Religious bullying can intersect with other types of bullying, like racialized and gender-based bullying. It could happen to students who are assumed to be Muslim, for example, based on their racialized identity, ethnicity or attire, or their spiritual or religious views.

Religious bullying can occur among individuals of the same or different religious groups, and between religious and non-religious individuals.

My teaching experience in a middle school and research in Québec led me to see that religious bullying needs to be named, identified and understood to find a solution.

Part of the solution for religious bullying is religious literacy. On the surface, religious literacy means learning to identify the differences within and across religions, and learning more about people who practice the religions. But learning in-depth religious literacy depends on the teacher’s approach, skill and training and the curriculum — three dimensions that the social environment may influence.

However, teacher training for the course is inconsistent across Québec and its textbooks are biased by reinforcing stereotypical images of Judaism and Indigenous spiritualities, for example.

When I surveyed 56 Montréal students from various schools and districts for my PhD research, student comments showed that the course fosters different understandings.

“Personally, I think that this course helps students to reflect on their own beliefs and it helps them be more educated about other religions. It has helped me a lot with my ethical dilemmas in recent months.”

“In my personal experience, it teaches that my religion is no different from any other, in that all religions are equally false.”

With colleagues, I studied the socio-cultural and political histories of Québec, Ontario, Alberta and B.C. Together, we proposed a religious literacy framework to help teachers, students and others understand religious and non-religious beliefs across Canada.

We believe religious literacy in Canada should mean students:

1) Understand the diversity in and between religious, spiritual and non-religious worldviews: for example, some Jewish people self-identify as being culturally Jewish rather than an observant Jew. A religious literacy framework means understanding people based on the terms they use, because worldviews have personal meanings and are experienced and expressed differently across individuals.

2) Recognize the dynamic nature of all worldviews, as they influence the social, economic and political sectors of society and are influenced by them. Recognizing the changing nature of worldviews includes considering that parts of society interact with and influence one another.

3) Understand a worldview from its own lens. So, for example, people should not look at Hinduism from a Christian perspective.

This approach to religious literacy can help people understand and engage with each other in school, work and public spaces. It can help students to consider the complex realities of how beliefs and power intersect across Canada. Such increased understanding could address stereotypes, hateful assumptions and slurs.

I recently defended my PhD in the Faculty of Education at McGill University, Montreal, Canada. I have a background in Sociology and Economics from Queen’s University and a Masters of Teaching from OISE at the University of Toronto, Canada. Before this, I worked in international corporations and non-profit organizations, and was a middle school teacher in the Greater Toronto Area. These experiences have all informed my current work with students, teachers, and the larger community.

My PhD research focused on the connection between religious bullying (which includes bullying towards religious and non-religious individuals) and religious literacy in North American public schools. I completed this study specifically in the contexts of Modesto, California, and Montreal, Quebec.

My additional research focused on religion, religious literacy, and violent extremism. These studies were titled “Educational trajectories of radicalized females in Montreal” and “Countering violent extremism through education in multicultural Canada.”

Altogether, my work on religious identities, religious bullying, religious literacy, and violent extremism has been published in academic and non-academic sources, and reports for the Tony Blair Institute for Global Change, UNESCO-MGIEP, and the Hindu American Foundation. I have also presented it at international conferences, such as the World Anti-Bullying Forum, the Society for Terrorism Research, and the Comparative and International Education Society.

My work is increasingly interdisciplinary and considers aspects of education, political science, sociology, psychology, terrorism studies, and religious studies. It includes research, program evaluation, and teaching in order to bridge conversations among academics and local community members. My work with local community members is most evident through my role at the Centre for Civic Religious Literacy.