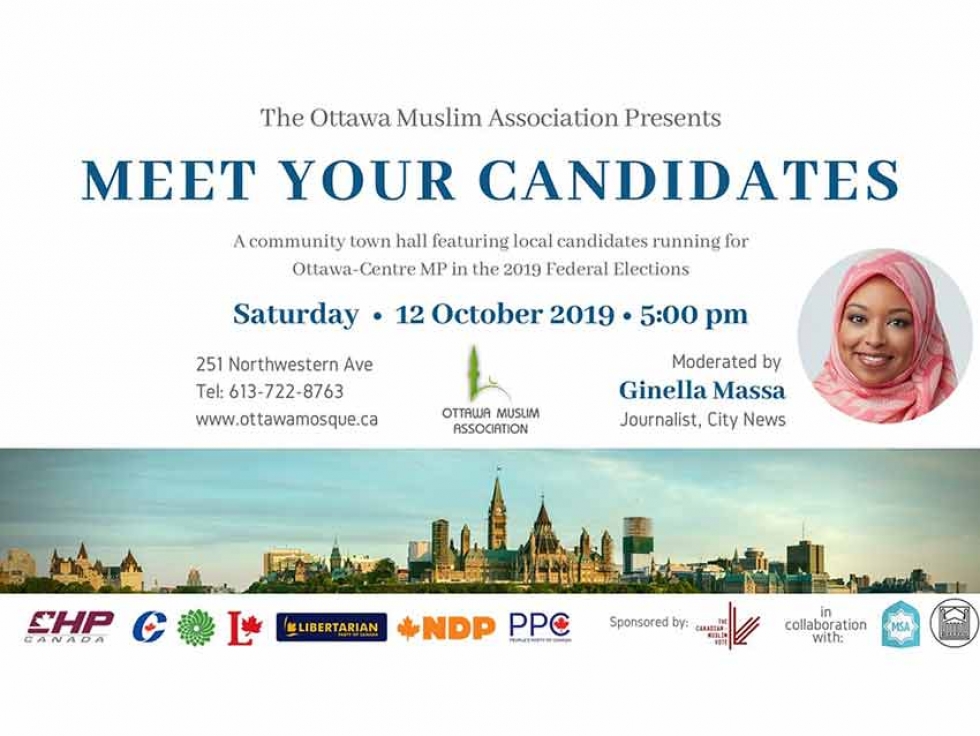 The Ottawa Muslim Association is holding an all-candidate townhall with the Federal Election candidates for the riding of Ottawa Centre.

The confirmed candidates include:

Carol Clemenhagen was the first female President & CEO of the Canadian Hospital Association, and was Executive Director of the Medical Research Council of Canada (now the Canadian Institutes of Health Research). She began her career in health care at the Department of Epidemiology and Community Medicine at the University of Ottawa.

A former Board member of St. Lawrence River environmental organizations, Canadian Thousand Islands Watershed Land Trust and the U.S based Save the River, she co-Chaired the community task force which, in 2002, successfully secured a United Nations Educational, Scientific and Cultural Organization (UNESCO) Biosphere Reserve designation, the 12th in Canada, for the Thousand Islands-Frontenac Arch region.

Angela Keller-Herzog has a diverse work and life experience. She is a trained economist (M.A. Economics, Carleton ’94), and has lived and worked in BC, Ontario, Quebec, Indonesia and Germany. She has worked in the non-profit sector, the service economy, and the private sector as an economic consultant, manager, and business owner. Angela also has 15 years experience working for the Canadian International Development Agency (CIDA). She has represented Canada many times, both overseas and at United Nations conferences.

She now runs an eco-friendly Bed & Breakfast (Angela’s B&B) that demonstrates a lower carbon footprint and living more lightly. She sits on the boards of the Ottawa Renewable Energy Co-operative, and CoEnergy Co-operative.

In 2015, Catherine McKenna was elected the first female Member of Parliament for Ottawa Centre and appointed Minister of Environment and Climate Change. A champion for Ottawa Centre, Catherine is most proud of the results she has achieved to date for residents in her riding, including securing federal funding for the new Flora Crossing, Ottawa LRT Phase 2, the new ‘super library’, more summer jobs for students, more affordable housing, and investments to help grow the local economy and create good jobs.

As M.P. for Ottawa Centre and in her Ministerial role, Catherine also led federal actions to protect the Ottawa River, make local buildings more energy-efficient, put a national a price on pollution and ban single-use plastics, by 2021.

Emilie Taman is a former federal crown prosecutor, law professor and community activist who is driven to build a fairer, more inclusive and more sustainable world. She believes growing inequality, the climate crisis and the spread of racism, intolerance and hate require substantive action and the courage to challenge the status quo.

As a crown prosecutor Emilie was responsible for the prosecution of corporate tax evasion, human smuggling, environmental offences, and fraud. In 2018, she was named one of the top 25 most influential lawyers in Canada by Canadian Lawyer Magazine.

Representatives from other parties running in the riding have also been invited.

Did you know you can VOTE THIS WEEKEND?

Advance polling begins on Friday, Oct. 11 and runs through the Thanksgiving weekend until Monday, Oct. 14.

Voters’ assigned advanced polling stations are listed on the voter identification cards mailed to their homes.

Voters can also cast an early ballot at any Elections Canada office until 6 p.m. on Oct. 15.