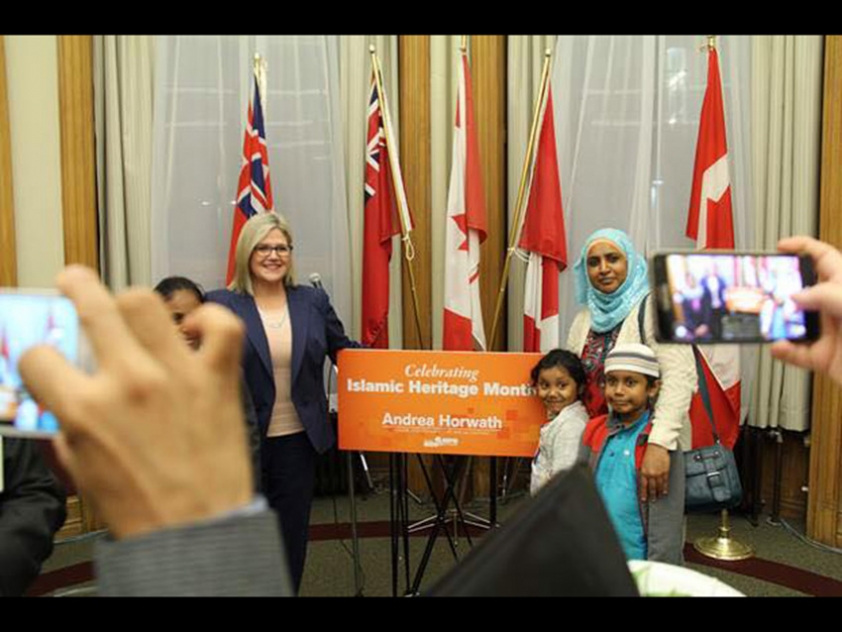 On October 6, 2016 it was recognized in Ontario, the province with Canada's largest Muslim population.
26
October
2016

I am happy to share with you that today, all three parties reached an agreement to pass the Islamic Heritage Month bill in the Ontario Legislature. MPP Shafiq Qaadri (Etobicoke North) co-sponsored the bill alongside MPP Teresa Armstrong (London-Fanshawe) and MPP Raymond Cho (Scarborough-Rouge River).

Across Canada, October has been proclaimed Canadian Islamic History Month, a time to celebrate the valuable role Muslim Canadians play in this country. Recognizing October as Islamic Heritage Month in Ontario reiterates Ontario’s commitment to embracing diversity and allows Ontarians an opportunity to celebrate and educate future generations about the important contributions Muslim Canadians have made in their communities across the province.

“It is great news for the Muslim community that all three parties have come together to pass an important piece of legislation that will recognize our collective contribution to our province and our country. Today, I’m a very proud Muslim Canadian,” Dr. Qaadri noted.

The Muslim community has been present in Ontario and in Canada since the country’s founding in 1867. The community is represented in the Ontario Legislature with three elected officials of Muslim faith that serve as Members of Provincial Parliament – myself as the MPP for Ottawa Centre, Reza Moridi, MPP for Richmond Hill and Dr. Shafiq Qaadri, MPP for Etobicoke North.

This legislation comes at a time when the provincial government has recognized the growing importance of addressing systemic racism, including Islamophobia, through the Anti-Racism Directorate which was formed earlier this year in order to build a fair society and open government that is transparent, accessible and accountable to the public.

If you have any questions or concerns, please do not hesitate to contact our office: This email address is being protected from spambots. You need JavaScript enabled to view it. or 613-722-6414.

NDP leads the way in declaring Islamic Heritage Month this October, in Ontario

Today Ontario NDP Leader Andrea Horwath and MPP Teresa Armstrong were joined by Farheen Khan from the International Development and Relief Organization and Dr. Al-Nadvi  from the Canadian Council of Imams in celebrating the establishment of Islamic Heritage Month in Ontario.

“Over the past few weeks, we have been pushing for Islamic Heritage Month to be officially recognized in Ontario,” said Horwath during a press conference Thursday morning at Queen’s Park.  “Establishing October as Islamic Heritage Month in Ontario is an important opportunity to celebrate Islamic culture and to reaffirm that our province’s diversity is something to celebrate. The NDP is proud to stand with the Muslim community in making this happen.”

NDP MPP Teresa Armstrong, who introduced the Bill, was pleased to see it finally become law after some weeks of uncertainty caused by the Liberal government’s lack of support for Unanimous Consent.

“There was really no reason not to do this, and I am thankful for the support of the Official Opposition and now of the government.  I think we all know how important it is to put aside our political differences when something as important as establishing Islamic Heritage Month is on the table,” said Armstrong.

The Province is now in line with the Federal government and many local school boards – including the TDSB- which have already taken this step.

“The Canadian Council of Imams would like to thank the NDP for championing this bill. This is an opportunity to highlight the true values and contributions of the Muslim community in Ontario and encourage a much needed dialogue in our province,” said Dr. Al-Nadvi. “We welcome this important step in building bridges between communities.”

"As we see an increase of islamophobic incidents both in Ontario and across the country, it's now more important than ever before to acknowledge and to celebrate the contributions of Muslims in Ontario,” said Farheen Khan. “The passing of this bill an opportunity to combat hatred and islamophobia by educating current and future generations of Ontarians, and I applaud the NDP's hard work on passing this bill."

"I thank Andrea Horwath and MPP Teresa Armstrong for introducing this bill. Conversations about Islam are too often framed around negative events. This can be emotionally challenging for children in schools, and it can skew their perceptions,” said Mr. Illyas Ally, Imam for the Islamic Dawa Centre and Executive Producer of Let the Quran Speak.  “Islamic Heritage Month will give children a vehicle to explore Islam from a new angle, empowering children to develop a healthier, richer understanding of Islamic heritage."