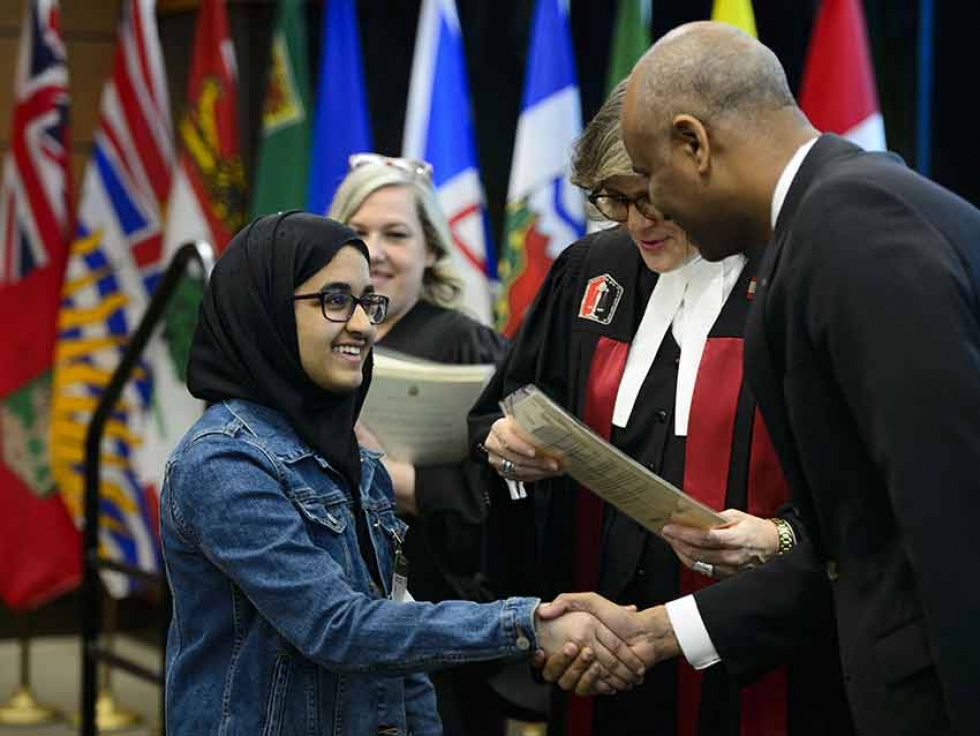 A youth receives her Certificate of Citizenship from Immigration Minister Ahmed Hussen and Citizenship Judge Marie Senecal-Tremblay on Parliament Hill in Ottawa on April 17, 2019 THE CANADIAN PRESS/Sean Kilpatrick via The Conversation
02
Aug
2019

Newcomers and Canadian high school students are friendly, but not friends

As international migration continues to grow in scope, complexity and impact, social integration of newcomers has become an issue of global concern. It’s particularly a salient issue for Canada, a country with one of the highest global rates of immigration.

During the five years between 2006 and 2011, more than one million foreign-born people immigrated to Canada. Researchers across Canada agree that existing integration policies in Canada have focused primarily on newcomers’ socio-economic integration, and paid less attention to social and emotional integration.

It is generally assumed in major host countries that children and adolescents who are educated in the host country will be automatically integrated into society and develop a sense of belonging.

This is apparently not the case. Countless studies in major global host countries have documented that newcomers’ social integration does not happen spontaneously in school. Many young newcomers who graduate from high schools continue to feel alienated from mainstream society.

To better understand what supports or hinders meaningful peer interactions between newcomers and local students, my colleague Nancy Arthur and I from the Werklund School of Education at University of Calgary interviewed over 50 young newcomers and local Canadian students in three Calgary high schools to understand their experiences and perspectives.

We defined newcomers as children who had arrived in Canada in the last three years who all spoke English as a second language and lived and were educated in another country before arriving in Canada. Canadian students were those who were born in Canada, or came to Canada before the age of six. Despite our efforts to recruit a representative and diverse sample of Canadian domestic participants in the study, we attracted mostly girls in this sample.

Our research has focused on potential friendship relationships between newcomer and domestic teens, because intercultural friendships offer multiple benefits for both: in racially and ethnically diverse schools, students who have more cross-ethnic friendships feel safer, less lonely and less vulnerable to social distress.

Intercultural friendships are associated with stronger leadership skills and better perceived social competence. But for new immigrants making friends with domestic peers is the most difficult task in their adaptation process.

Our preliminary findings suggest that the newcomer students we spoke with experience multi-layered barriers in their social integration, particularly in making friends with local students. These barriers range from linguistic and psychological to social and cultural.

Interviewees frequently mentioned newcomers’ lack of English proficiency as a key factor that limits the opportunities and depth of peer interaction.

But behind this simple explanation are complicated psychological, social and cultural factors that interplay to influence individual human behaviour.

A salient barrier is the human tendency to socialize with similar others — what sociological theory calls homophily.

Both newcomer and Canadian participants shared their observations of how friendship groups formed by newcomers and Canadian students work to hinder intercultural peer interaction. Interactions between them are often limited to classroom activities and saying “hi” in the hallway.

Cynthia, a Grade 10 Canadian student of European descent, shared the observation that international students “prefer to speak in their mother language because it feels more comfortable with them. Then they develop almost, like, cliques … ”

Some international students, however, experienced the social inclusion and exclusion related to cliques for the first time in Canadian schools. April, a Grade 12 international student, shared the following observation: “You know I learned about cliques for the first time in Canada … I’ve lived in many countries, like Tunisia and Nigeria, Algeria … Like I’ve been in a lot of places and I’ve never experienced the cliques before. It was, like, very exclusive.”

One challenge frequently experienced by some newcomer students is the feeling of discomfort and anxiety when talking to Canadian students. Similarly, Canadian students also feel either they do not know what to say to newcomers, or worry they may say something wrong and offend the newcomers.

For both, it takes motivation as either self-interest or kindness, cultural open-mindedness, interpersonal skills and sometimes support from teachers to leave comfort zones.

Contrary to general perceptions of newcomers as vulnerable and needing help, our study strongly suggests newcomers are also truly assets to Canadian schools and society, bringing in new experiences, perspectives, skills and strengths.

Win, a Grade 12 student who had arrived from China six months earlier, told us: “The Canadian students found that we can be good friends because I can help them with math and science and they can help me with English … We found that if it’s worthwhile to make friends with each other.”

Aya, a Syrian refugee who could not yet speak fluent English, formed a group with her friends and named it “Giving Back from Your Heart.” Together, they give out flowers at the Chinook Mall, visit nursing homes to talk with elderly people and help other newcomers to Canada. Aya said they do these things because they enjoy the freedom in Canada, and see Canadians as kind and respectful of different religions.

While Canada is generally regarded globally as being a tolerant and liberal country, the domestic Canadian participants in our study acknowledged prejudice and stigma among themselves toward newcomers. They believe media coverage of religious extremism, terrorism and the high influx of refugees played a role in their view of newcomers.

Sam, a Canadian boy of Chinese descent, pointed to a negative influence of media shaping stereotypes of people from the Middle East: “There’s definitely stigma. I’ve heard people say different things about different cultures … like Syrian things or the terrorism in the Middle East right now. I feel like the Canadian people here have kind of gone like backwards with racist things, after hearing all of that bad stuff on the media.”

Jane, a Canadian girl of European descent, said she disagreed with the way her Canadian friend treats newcomers — as “lower.” We noted that the differences between Jane and her friend mentioned here were their levels of exposure to other cultures and languages, encouraged by their respective families, and consequently their understanding of newcomer peers and motivation to interact with them.

Our preliminary research shows that despite significant efforts to welcome and support young newcomers in Calgary and Alberta schools, similar to schools in other Western countries, social and emotional integration of newcomers remains a challenging task.

Our research suggests this challenge can be overcome if there is a societal-wide effort by schools, parents and government-funded programs to promote intercultural and interpersonal motivation, knowledge and skills of both newcomers and Canadian students to make friends with peers different from themselves.

Xu Zhao is Assistant Professor and Director of Research in Chinese Youth Mental Health at the Werklund School of Education, University of Calgary. Her research focuses on understanding child and youth development from cultural (processes in family, school, and society) and cross-cultural (experiences of migration and immigration) perspectives. She grew up in China and graduated from the Northeast University of Finance & Economics in Dalian. She came to Canada in 1999 as an adult immigrant and studied journalism and education in Montreal. She later moved to Boston to study human development and psychology at Harvard University. In 2014 she received the inaugural Werklund Postdoctoral Fellowship from the University of Calgary and moved back to Canada. Since then, she has been doing research on newcomers in Canadian high schools, investigating how to promote their social and emotional integration into Canadian society.