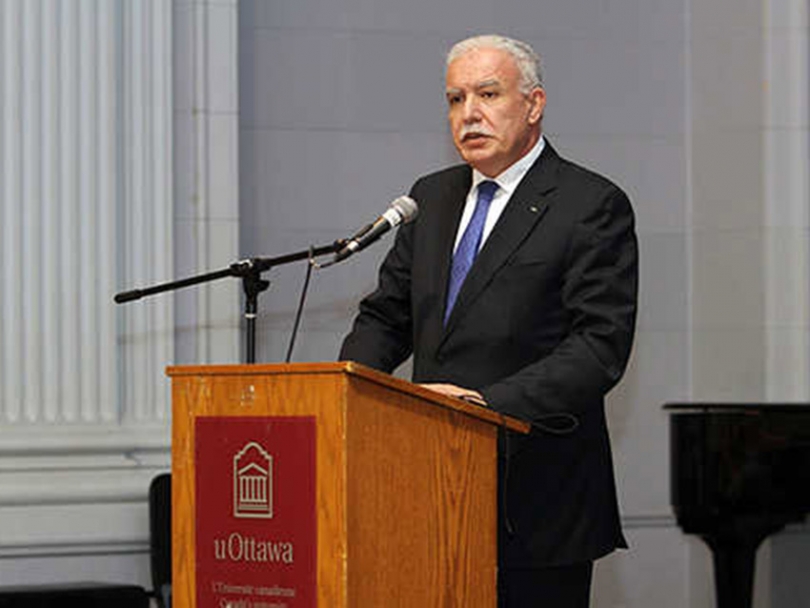 In his speech entitled “Palestine: Current Challenges and Prospects for Peace” Minister Malki highlighted the lessons learned in the past 20 years since the Oslo Agreement was initiated, and how this interim peace offer has affected the Palestinian people and the overall political environment of this volatile region. Minister Malki expressed his sadness over the conflict that has affected the area for decades, stating how disheartening it is that such violence is being witnessed in a land where “people of every religion greet each other with ”˜Peace'”.

Mr. Malki, who holds a PhD in Civil Engineering and a former professor at the Birzeit University in Ramallah, focused his speech on the “Lessons Learned” by the Palestinian people pertaining to peace negotiations, breaking down the negotiating tactics that he believes must be adopted and implemented for successful peace talks. Mr. Malki explained that the most prevalent lessons learned for the Palestinians have been to demand the presence of a neutral third party in all peace talks and closed room negotiations.

“There are two reasons for this” Mr. Malki explained, as this is necessary when “bridging proposals and also for the truth to be expressed to the international community in cases where negotiations fall apart.” Mr. Malki did not hesitate to point out that in the most recent round of negotiations, Israel “prevented” the United States posing as the neutral third party, to enter the negotiating room. “Out of seven rounds of talks, the United States was allowed to one lunch,” the minister said laughing.

Minister Malki also highlighted the importance of understanding the distinction between the issues which the Palestinians and Israelis hold as important. For the Israelis, this has always been a question of attaining and maintaining national security, while for the Palestinians the driving factor is international recognition of their territorial borders. The fact that Israel is only interested in speaking about security has been hindering peace negotiations for decades now, he said.

Mr. Malki also expressed frustration over the issue of an ongoing interim freedom agreement since the original Oslo agreement 20 years ago.

“Some Israelis are calling for Oslo 2,” the minister stated, which he said the Israelis saw as an interim period leading to permanency of this ongoing situation. “After 20 years, the Palestinians needed to react where the international community had failed to react”