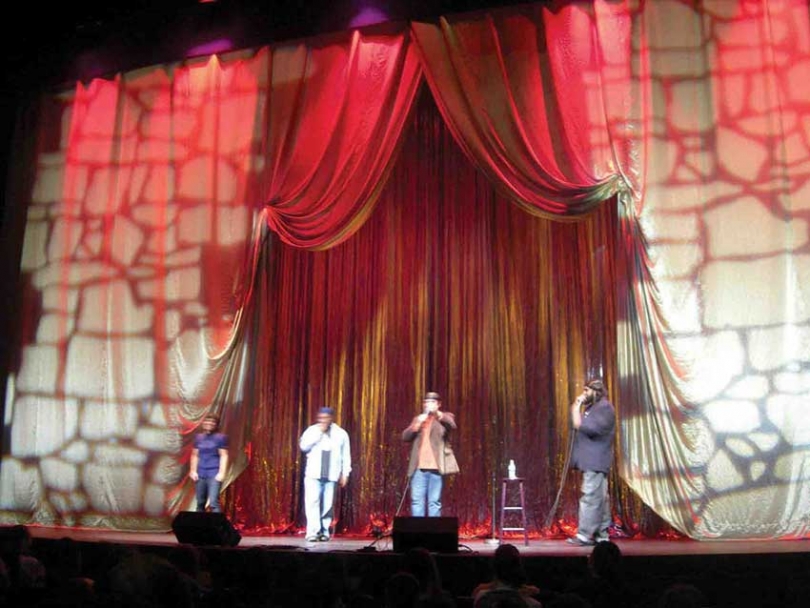 Stand-up comedians perform on stage at the annual MuslimFest.
24
Jun
2010

As MuslimFest, Canada's largest Muslim summer festival, gets ready to kick off on July 31st at the Mississauga Living Arts Centre, the Muslim Link sat down with Taha Ghayyur, one of the founders and organizers of the two-day art and cultural festival, to get his thoughts on the need for such event and his hopes for the future of Muslim artistes in North America.

What prompted the creation of MuslimFest?

It was in the summer of 2003 that a group of concerned people, including Muslim artists like Dawud Wharnsby Ali, community leaders like Abdul Malik Mujahid the President of Sound Vision, teachers, and other creative individuals gathered to discuss the most effective ways of connecting with our neighbours, communicating the message of Islam in creative fashion, and engaging Muslim youth. Moreover, a strong need was felt to offer an alternative to the mainstream entertainment industry so Muslim youth and families could enjoy artistic performances and shows that are safe and grounded in Islamic ethics.

Thus a concept of the first ever Muslim arts and entertainment festival in North America was formalized. MuslimFest, as it was aptly named, became a collaborative project of Sound Vision, DawaNet, and Young Muslims Canada.

These three organization pooled their energies, talent, volunteers, and meager financial resources together to craft this groundbreaking event on August 7, 2004, at the Living Arts Centre, Mississauga, Ontario.

Since 2007, MuslimFest has been a project of DawaNet, legally and financially speaking. However, it still remains a collaborative effort of Sound Vision and DawaNet, while Young Muslim is no longer officially part of it.

How successful have you been in achieving your objectives?

The objectives of MuslimFest are:

-       To build bridges with all Canadians of diverse ethnic and religious heritage
-       To celebrate the cultural diversity within the Muslim community through art, humour, cuisine, exhibits, and meaningful entertainment
-       To encourage an artistic expression that is both ingrained in Canadian culture and faithful to the spirit of Islamic tradition
-       To be the source of innovation and development of local talent in the Muslim art and entertainment industry
-       To engage youth and channel their creative energy into projects that are productive and beneficial to the wider Canadian society
-       To provide an alternative to the mainstream entertainment by integrating universal moral values

Alhamdulillah (praise be to Allah) we have been able to achieve all our objectives to certain degrees over the past six years.

Today, MuslimFest stands as the largest Muslim event in Canada open to public. It's a signature event of the City of Mississauga and is sponsored by the Ontario Ministry of Tourism and Heritage Canada. Since 2008 MuslimFest has been twice selected among the top 100 festivals of Ontario by the Festival Events Ontario (FEO) and has won two awards as well.

What sort of support has the event received from the public?

The response has been overwhelmingly positive since the first year. The MuslimFest attendance has been consistently increasing. Starting with around 7,000 attendees in 2004, it has grown to 13,000 visitors in 2009 (as estimated by the City of Mississauga).

Of course, like any innovative and unconventional community project, MuslimFest has been criticized by small pockets in both so-called conservative and progressive Muslim camps. That has not distracted us from our vision, objectives and expansion, alhamdulillah.

Participation by mainstream / non-Muslim public has also increased gradually over the years. Non-Muslims account for perhaps 15 to 20 per cent of attendees. Due to our aggressive marketing over the last two years through a local radio station, mobile signs on city roads, and inclusion in the City of Mississauga's summer event calendar, we have witnessed significant interest and participation from the wider community.

What surprises, if any, have you encountered in holding this event?

How difficult it is for many Muslims to understand the crucial role of arts and music in the development of Muslim culture, which is an integral part of Muslim youth identity. What's shocking is to see many Muslims, who would otherwise be quite "liberal" and may participate in all sorts of questionable environments, criticize all the good in that comes from a creative effort of this type.

How challenging it is to fund and financially sustain creative projects like MuslimFest. Despite the overwhelming participation from the Muslim community, it's not easy to convince Muslims to donate to this event.

How open and receptive most mainstream organizations, government bodies, and general public are to outreach projects like MuslimFest (as compared with mosque/religious events) that are non-threatening spaces of interaction.

How much great talent we have in the Canadian Muslim community. Every year, we witness a few rising stars.

What weaknesses or strengths has the event highlighted within the Muslim arts scene (if there is one)?

Yes, we do have a Muslim arts scene in its early stages of development in North America. A lot of new Muslim talent is showcased at MuslimFest every year. Our rising talent show has now expanded from one day to two days. Many upcoming artists also feature at the "Reviving the Islamic Arts" entertainment stage at the Reviving the Islamic Spirit Convention over the last two years. Both MuslimFest and RIS attract new young artists from all over Canada. Some even from the US.

Many Muslim organizations and mosques, who are quite conservative in operation and message, are now beginning to appreciate the idea of including artistic performances in their own programs. Some Islamic schools and teachers are being engaged to introduce creative Islamic arts lessons in their curriculum as well as their community events

On the other hand, while there are so many emerging artists interested in making a career out of their talent, there are hardly any resources, financial support, or professional advice for them in North America. The situation is similar in the UK and Europe. Even many well-known artists are struggling to stay afloat; most no longer have an Islamic media company distributing for them or representing them. Most artists are doing whatever they can independently. MuslimFest and Sound Vision are looking into introducing Artist Development Programs to assist the emerging Muslim talent.

Second, due to lack of appreciation for the Islamic arts and Muslim talent, many in the Muslim community are not willing to pay much for a concert or comedy show ticket. There is a need for more awareness about what is Islamically permissible and what isn't with regards to entertainment (including music, film, comedy, gender interaction etc.) While most of our community is cautious about what is halal (permissible)and haram (impermissible) with regards to food, many Muslims don't care when it comes to entertainment/socialization. Those who care, usually take it to the other extreme and view everything as haram.

Is there a generation gap -- are Muslim youth more adept at sharing their stories and utilizing mainstream methods (spoken word, fictional storytelling,etc., ) much more so than the older generations?

Yes, absolutely. Almost 80 per cent of rising talent in North America is in their 20s or even younger. Muslim youth are increasingly realizing their creative potential. Interestingly there is a huge wave of spoken word artists that has emerged among younger Muslims in the past three years, almost out of nowhere, especially in Canada.

However, a great number of established Muslim celebrities today are actually older, in their 30s, 40s and 50's. They include: Preacher Moss, Azhar Usman, Dawud Wharnsby, Zain Bhikha, Baba Ali....etc.

What does that mean for the future of Muslim participation and contribution in the arts?

The future of Muslim participation, especially in the social justice arena utilizing arts to convey the message, seems very promising. Already we have powerful young Muslim spoken word artists from Canada like Sofia Baig, Boona Mohammed, Wafa, Jaffar Alam and other who are making their mark in the mainstream spoken word / poetry world. And we have celebrities like Amir Sulaiman, Def Poetry artists, who has attracted the attention of mainstream producers for his album.

How optimistic are you that Muslim voices will be the ones to take ownership of their own stories and actually share them with each other and the wider society?

That's a tough one. Only time will tell.

I believe we have some brilliant Muslim voices now in journalism as well as arts scene, who are doing their best to articulate their own stories their way. However, we still have a long way to go.

A great obstacle in our voices not being heard in the wider community is also the Islamophobic bias that is found in the major media outlets. Since media is profit-driven wants to sell stories that are controversial and that sizzle, they are not too interested in our “positive” stories.

The real challenge is to pitch our own stories in way that pique the media and wider community's interests.

While I am very optimistic about the Muslim arts scene, I would say we are still in our infancy stages, with a lot of instabilities and growing pains.

What to expect at MuslimFest

MuslimFest celebrates the best in Muslim arts, entertainment, culture, and food. MuslimFest attracts over 10,000 people every year. Visitors enjoy live performances, savour flavours from around the world, and participate in cultural artistic workshops, while building bridges with their Muslim neighbours.