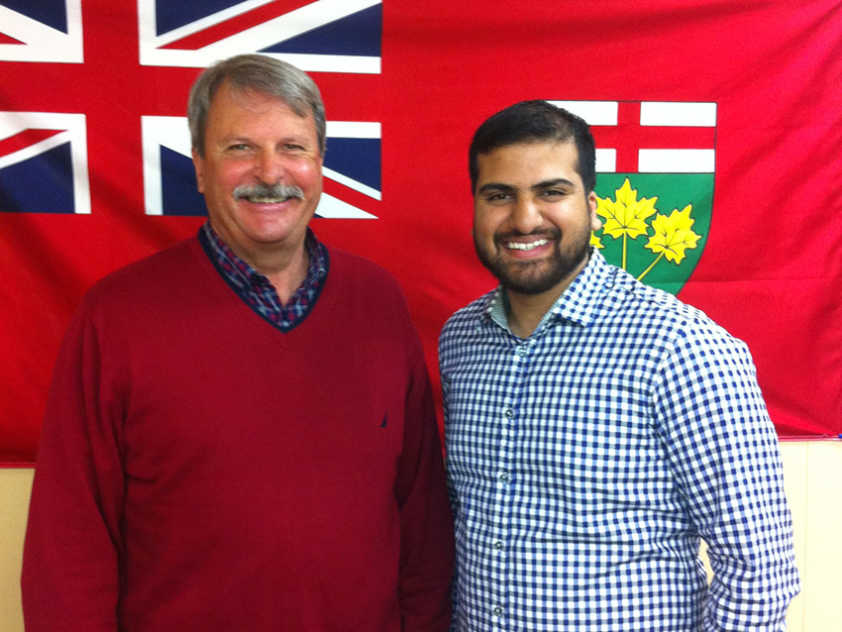 There are concerns that younger voters might not be very engaged in this year’s Ontario provincial election. Muslim Link has sought out young Muslims in Ontario who are working, volunteering, or running with each major party in the provincial election to get their opinion about why it is important to be engaged in provincial politics. Our first interview is with Adnan Ali who is volunteering with Progressive Conservative Candidate Jack MacLaren in Carleton-Mississippi Mills in Ottawa.

My name is Adnan Ali and I’m 23 years old, my mother was born in India and my father was born in Pakistan. I was born and raised right here in Ottawa (grew up in Kanata more specifically) and I am currently a student at Carleton University.  My particular field of study was Political Science with a concentration in Public Affairs and Policy Analysis.

2. Did you grow up in a family that discussed Canadian politics at home?

Growing up, discussion of politics was scarce.  It wasn’t a dinner table topic; we usually save eating time for discussing Deen (religion) or the Friday Khutbah (sermon), rarely politics.

3. Who shaped your own political development?

My brother was probably one of the main reasons I became so interested in politics, at least that’s who I would attribute it to because he was the most politically active in my immediate family.  It may sound odd but now that I reflect, I think me and my brother bonded and coalesced around political discussions and watching Election Day coverage together.  If there was any discussion of politics in my family growing up it was usually done away from the dinner table.

4. Do you feel that you are more aware of Canadian politics than your peers? If so, why, if not, why not?

I certainly hope so; a lot of my peers have different interests or specializations such as engineering, finance, etc.  Although some are tuned in, I would consider them more of a consumer of political news rather than the type of people who would study, analyze and research political trends, or the daily briefings from the Hill or Queen’s Park.

5. Why do you think it is important for more young Muslims to pay attention to Provincial Politics?

Whether it is at a federal, provincial or municipal level, politics shapes a part of our identity.  But when you look at the most critical aspects of our everyday lives here in Ontario, the province has jurisdiction over these issues.  The two most prevalent issues are Health and Education.  As Muslims it is important for us to recognize that these issues have an importance to us not only from a citizen’s perspective but also as Muslims and taxpayers.

6. What are the priority issues for you in this election?

I would have to put education and the economy right at the top for me.  I think education as a tool and as a system needs to be revitalized.

7. Why did you choose to work with this particular political party?

Personally, I’d like to think I grew up in a capital L “Liberal” family, and as a Muslim my values would place me all over the traditional left-right political spectrum, however, when I looked at the plan put forth by the PC’s I looked at it and said, ‘you know what, I can get on board with this’.  While I do not consider myself a hard, strong or long standing Progressive Conservative supporter, I feel as though change once in a while is not a bad idea.  Considering the economy is performing relatively well, in my opinion, mashaAllah I wouldn’t mind a bit of ‘austerity’ so that we do not have to deal with a worsening economic condition down the road.

8. Tell us about the candidate you are working with.

The Progressive Conservative incumbent I am working with is Jack MacLaren, he became a PC candidate back in 2011 when he defeated long standing PC member Norm Sterling, surprisingly, in a nomination race and won the last election handily with over 50% of the vote in our constituency.  Jack is a former president of the Carleton Landowners Association and regularly served as a substitute on the select committee on developmental services which explored comprehensive development service strategies to address the needs of children, youth and adults with an intellectual disability or who are dually diagnosed with intellectual disability and mental illness.

9. Tell us about the riding you are working in.

The riding I’m in is Carleton Mississippi Mills.  Many voters recognize it as the “riding that has Kanata in it.” But some people don’t realize, Almonte is also a part of the riding as well as Richmond which is south of Bridlewood.  It is a much larger riding then people give it credit for.

10. Explain your role as a volunteer with this campaign.

As a volunteer I’ve taken on many tasks, whether it’s putting up signs, door knocking, or discussing all sorts of issues with Jack that affect the Muslim community, I’ve learned a lot about what goes into a campaign.  While what one does on campaigns sounds simple, there are a lot of intricacies that you can observe once you’re in the office and you realize it’s not as simple as ‘putting up signs and knocking on doors’.

11. Has the candidate you are working with done outreach with Muslims in the riding?

Jack has attended several events at the Intercultural Dialogue Centre down the road from his office on Michael Cowpland Drive, and as a matter of fact some of the members of the Turkish community that he met at the centre have volunteered to canvass alongside Jack.

12. Are you concerned that many people your age are not voting?

Absolutely, when you look at some basic demographics we tend to find seniors much more active at the voting booth, which means they command more of the issues politicians give priority too.  A few months ago, Nik Nanos from Nanos research gave a presentation at an event organized by Ottawa U students called iVote.  In that slideshow presentation he documented what the effect on the federal election would have been had younger citizens voted.  If we turn out to vote then our issues will be addressed, because candidates will realize that our concerns cannot be ignored.  If we don’t, then we become lost in the middle.  When you belong to a particular age demographic, you become part of an interest group, you’re lobbying or influence is exerted at the ballot box.  If you don't show up, then those you are trying to influence will not address your issues the way you want.

13. What changes do you think are necessary in order to get young Canadians more engaged in Provincial Politics?

I think there are a plethora of things you can do.  I would start by trying to understand what drives younger populations to vote.  Whoever figures that out with consistency and frequency is a millionaire in the making.  At the same time I would tell young Canadians that the onus is partially on them.  Politicians and the older demographics that support politicians are starving for youth involvement and attention.  You are there aces, they need you, and they want you to help them.  It is similar to involvement in Muslim community initiatives, as the elders move on and wind down, they look to our youth to renew and enhance efforts to better the community with the same enthusiasm they had when they emigrated here however long ago.

14. Do you feel that Muslim Canadians tend to focus more on Federal politics then provincial politics?

I do feel Muslim Canadians focus more on federal politics over provincial politics however I feel the same to be true for much of the population.  If we look at voter turnout percentages, and participation, you will see more support and donation of time and money during federal elections.  I think that is partly due to the scope and breadth of the federal government.  Also, as a primarily immigrant community, we tend to have the impression that federal politics is more important.  What we do not understand is that issues that affect us most are provincial issues.  When I think of Muslim oriented services like social service groups (Islam Care), organizations for those with disabilities (Canadian Association of Muslims with Disabilities) in our community or the many Islamic schools, these are all Muslim based services and they are regulated, for the most part, by the province.

15. What are your plans after the election, whether or not your candidate wins?

InshaAllah, I plan to get ready for the coming month of Ramadan, along with that perhaps I’ll look to use my experience from the campaign to get involved in public affairs and/or government relations.  I think this is something our community requires, as a community we’ve come a long way however a lot of our efforts are fractured in terms of size and scope.  While some reasons are entirely understandable, we have yet to develop or create a public affair strategy that we can call our own.  The beauty is, it’s never too late to start.

Check back for reflections from young Muslims involved with the Liberal, NDP, and Green parties.

To learn more about how to vote in the Ontario Election visit the Elections Ontario website.