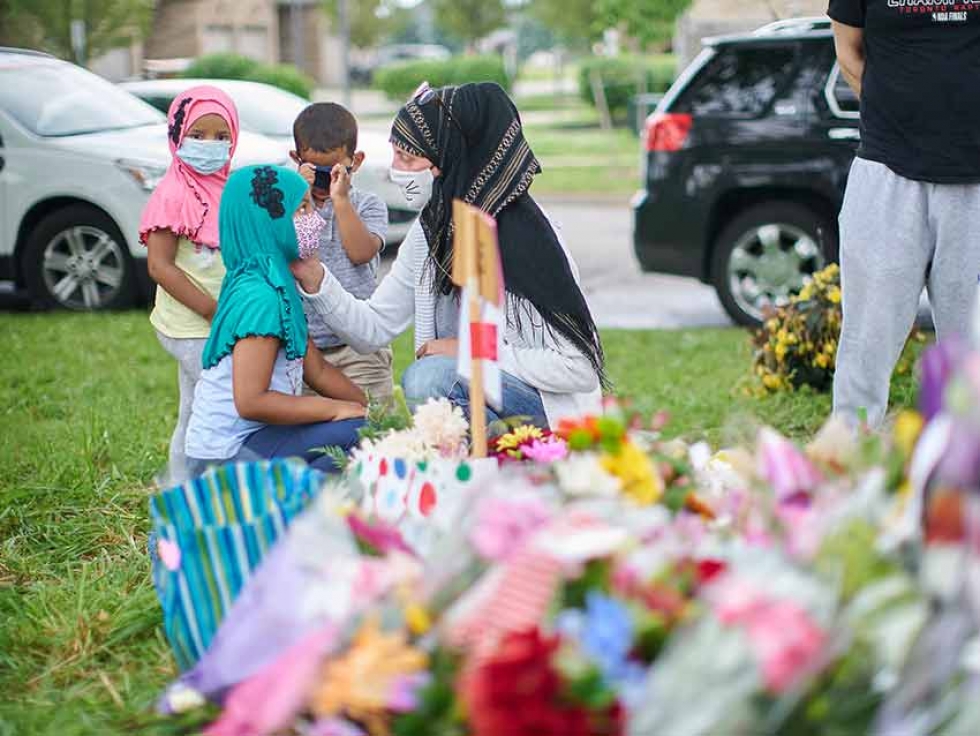 Mourners gather at the scene of the hate-motivated vehicle attack in London, Ont., which left four members of a Muslim family dead and sent their youngest son to hospital. THE CANADIAN PRESS/ Geoff Robins
10
Jun
2021

A Pakistani-Canadian family out on a stroll on a warm weekend evening was murdered in a horrific act of Islamophobic violence in London, Ont. A nine-year-old boy, hospitalized with serious injuries, is the only survivor of a terror attack that killed his sister, father, mother and grandmother.

How will he make sense of this unthinkable tragedy? This was not an accident. Police have said his family — his father, Salman Afzaal, his mother Madiha Salman, his 15-year-old sister Yumna Afzaal and his grandmother, Talat Afzaal — was “targeted because of their Muslim faith” and hit by a speeding truck. How do you process this targeted hate and violence at such a young age?

While Canadians may be shocked and blindsided by this mass murder, the ingredients for this tragedy have long been in the making. The warning signs of white nationalist violence have been glaring.

Hate crimes against Muslims in Canada grew 253 per cent between 2012 and 2015. The 2017 terror attack in a mosque in Québec left six men dead after offering their evening prayers. Last year, a caretaker in a Toronto mosque was stabbed and killed and the person charged with his murder is alleged to have been influenced by neo-Nazi social media posts.

But it’s not only far-right fringe groups that hold anti-Muslim views.

Results from a 2016 Forum Poll revealed that 41 per cent of Canadian adults expressed some level of bias against identifiable racial groups, with Muslims having the highest negative rating at 28 per cent.

Another survey published in 2016, by the Ontario Council of Agencies Serving Immigrants, found that only 32 per cent of Ontarians had a “positive impression” of Islam.

The following year, a survey done for Radio Canada revealed that almost one in four Canadians would favour a ban on Muslim immigration, with the level of support for this ban rising to 32 per cent in Québec. Most respondents (51 per cent in Canada, 57 per cent in Québec) felt the presence of Muslims in this country made them “somewhat” or “very worried” about security.

A breeding ground for violence

These negative views of the Muslim presence in Canada create a breeding ground for xenophobic racial violence.

I research Canadian Islamophobia and its networks that produce hate and circulate destructive ideologies.

There is a networked ecosystem of Islamophobic hate groups in Canada that promote conspiracy theories about Muslims threatening “Canadian values” and western civilization, plotting to impose “creeping shariah law” and political Islamism.

Other problematic rhetoric includes the liberal washing of white nationalism that politically camouflages xenophobic, Islamophobic and racist ideologies under the guise of “protecting democracy,” “freedom” and the “rule of law” from what are regarded as illiberal, anti-modern and anti-democratic Muslims.

Through these policies and practices, liberal Islamophobia normalizes anti-Muslim racism and constructs Muslims as suspect and inferior citizens.

The 9/11 generation of Muslim youth have come of age at a time when their faith and identity are under siege. This is a condition that has been exacerbated with two hate crimes resulting in mass murder in Canada in the past four years. The risks for the Muslim community are palpable. There is heightened fear and anxiety along with grief and mourning.

The calls to action from the local Muslim community in London, Ont., include an immediate national summit on Islamophobia in Canada. This is an important step to begin the work that needs to be done challenging Canadian Islamophobia.

Call for national summit on Islamophobia

This summit should have been undertaken after the Québec mosque shooting four years ago. Canada’s national amnesia surrounding this attack was finally addressed with a National Day of Remembrance of the Quebec City Mosque Attack and Action Against Islamophobia. We now have another horrific tragedy to remember and mourn and yet very little action on Islamophobia.

For Fayez Salman, the nine-year-old survivor whose world has been shattered by this hatred, none of this matters right now. As a scholar of Islamophobia studies, I can analyze what kinds of social, cultural and political factors precipitated the racist Islamophobic violence that destroyed his family and permanently altered the course of his life, but in the end God only knows how Fayez will make sense of this tragedy. Our prayers are with him.