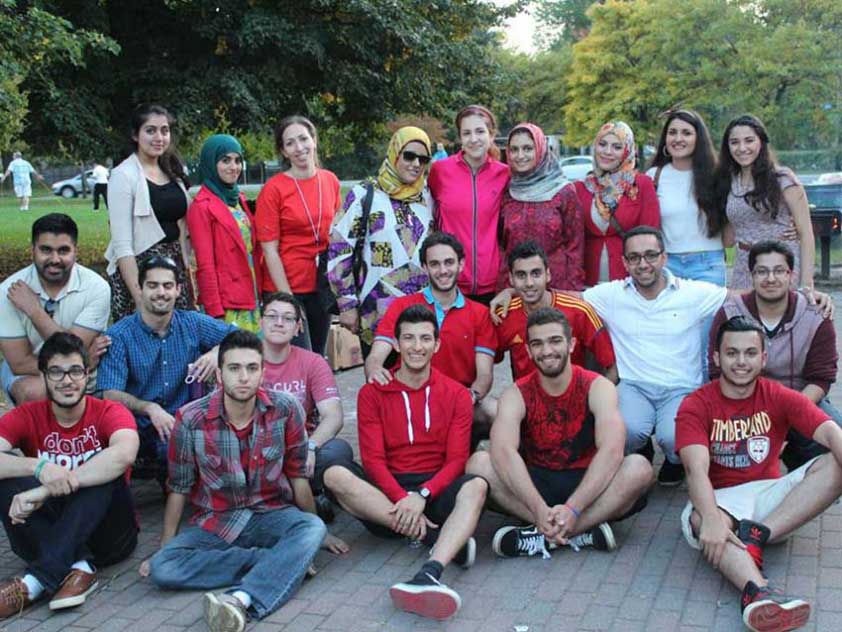 The Iraqi Students' Association of Carleton University (ISACU) partnered with local Muslim charity Human Concern International (HCI) to organize a community BBQ on Sept. 28th at Britannia Park to raise funds for Iraqi refugees.
The organizers made it clear in their messaging that funds would go to Iraqi refugees, irrespective of religion or ethnicity. This message resonated with Ottawa's Iraqi community who are made up of Arabs and Kurds, Sunni and Shia Muslims, as well as Christians.

"This is a surprise! I don't usually see the Iraqi community come together like this," stated Sam Behnam, an Iraqi Christian who has lived in Canada for over 11 years. "This is the perfect example of what Iraqis are....or used to be," he added.
Originally from a village in Northern Iraq, Behnam has been directly impacted by the recent attacks on Christian communities by the Islamic State (ISIS). "I don't have a home anymore, ISIS took it over now. Everything is gone," he explained.
In early August, when his friends and family realized that ISIS was heading to their village, they left their homes in the thousands and headed for Kurdistan. "Trust me when that happened I was so stressed, I couldn't sleep for days. It's the place I grew up and suddenly it's gone," Behnam shared.
Part of Behnam's family are now refugees struggling in Kurdistan, a place that has offered safety from ISIS but not much else. "People are sleeping on the streets, in parks. There aren't many refugee camps set up yet," he explained. His family are now among the millions of Iraqi refugees in the region.
Khalid Altay, a fourth year engineering student at Carleton University, who heads up the Iraqi Students' Association, feels there is a need to raise more awareness about the plight of Iraqi refugees and the ongoing problems in the region. Along with his fellow students, he found sponsors to donate refreshments for the BBQ where you could find everything from Starbucks coffee to shawarma to Nestle Toll House cookies. The funds raised from donations and the BBQ were given to Human Concern International's Iraq Appeal. "We trust HCI to be able to get the funds to the refugees as they have good contacts on the ground," Altay explained.
The Iraqi Students' Association hopes to continue fundraising throughout the year. Altay explained that the Association aims to bring students of Iraqi heritage together across the religious and political divides. "In our constitution it states that we don't include any religious or political topics. We aren't going to separate Iraqis," he explained. "Iraq used to be a very multicultural place. You had different peoples, Arabs, Kurds, Turkoman, Armenians; you had different religions, Christianity, Islam, Judaism, and even people who didn't believe in God, and we were living together peacefully," he stated. Altay has hope that a love of Iraqi culture will help bring Iraqis from these different communities together again in the diaspora.
Sam Behnam hopes for this as well. "When I grew up, Muslims and Christians lived together. I had Muslim friends, and the Muslims didn't talk about Sunni and Shia," he said. But he knows that the Iraq of his childhood, like his village, is no more. He blames the wars for creating this situation, which is why, although he feels that ISIS is a real threat to his family, he doesn't feel that another war will solve anything. "War was never a solution and will never be a solution," he stated bluntly.
"All the wars that have happened through the years have created such madness," he stated, "There is no education now, all the educated people are fleeing so whoever is left there they have no education, so what do they know how to do? Just fight, have a civil war, say Oh You are Shia , Oh You are Sunni!," he explained.
His own solution would be an investment in the education of Iraqis, particularly the children who were born into the war and traumatized by it. "The basic thing is build more schools and push people to go to school. Schools will help people to open their mind to diverse people and cultures," he explained. He doesn't think his idea is that far-fetched in comparison to the billions of dollars that are being spent to wage the war against ISIS.
For Altay, the solution is helping the Iraqis of the diaspora remember who they were and who they are, which for him comes down to one word "ghayrah". This word doesn't translate well and as Altay asked for advice from other Arab speakers on how best to translate it, it became clear that it also doesn't have one meaning. Suggestions as disparate as decency, pride, honour, jealousy, humanity, and morals were proposed. Upon reflection, Altay made a choice. "The best aspect of our Iraqi culture is our decency, our human decency."