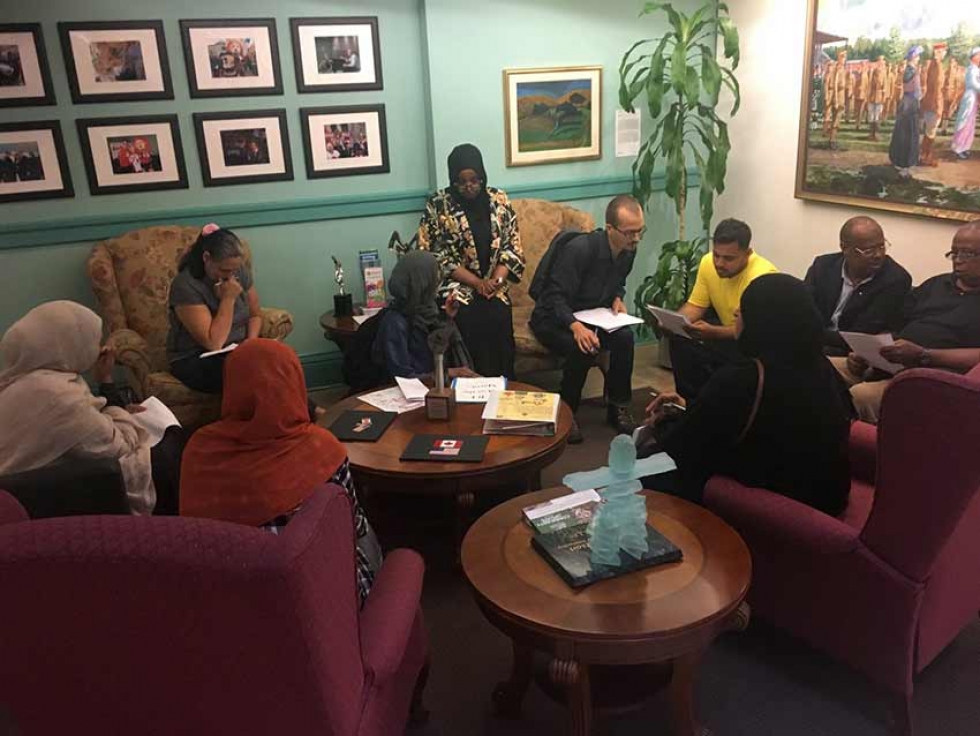 We would like to thank Mayor Jim Watson for his efforts to help support tenants facing eviction in Herongate by negotiating with Timbercreek for an extension and a larger financial compensation. However, the tenants in Herongate are not fighting for more time or more money.

Our demands are the following:

1) We are demanding to STOP THE EVICTIONS, which will prevent the total destruction of our community and the loss of a large number of affordable family homes in the City of Ottawa. Stopping the evictions is the only way to ensure there is zero displacement of the families that make up our tight-knit and extremely diverse community. As the only neighbourhood this diverse in the city, the demolition of such a racialized community sends a larger implicit message: We do not want you here. Around 600 people are currently facing eviction–the largest of its kind in Canada.

2) We are demanding a 3rd-party assessment of the Herongate townhouses slated for demolition in order to impartially determine the long-term viability of these homes.

"From here on in, we have to join forces and push hard. It's the only way we're going to get anywhere, and we have to do it collectively as a community." https://t.co/llaEzlEhEN— Herongate Tenant Coalition (@herongatetc) June 29, 2018

The City of Ottawa has a significant amount of power and can dictate how Timbercreek’s attempt to force these mass evictions plays out. Many issues at play in our neighbourhood fall under the City’s purview.

First, the City controls the planning process. This is why we are asking for the City to reset the Secondary Planning Process–to prioritize the community’s input and support the people who currently live in the neighbourhood. The planning process legitimately includes the tenants, not just the developers and the City.

Second, the City has the sole authority over zoning, development, renovation and demolition permits. The only way Timbercreek can transform our neighbourhood is with the City’s explicit approval of these permits.

Third, bylaw and property standards compliance is enforced by the City. Timbercreek is claiming 25 per cent of the townhouses are “no longer viable,” yet they should have never ended up in their current state of disrepair, per the City’s property standards.

Fourth, the City has the power, granted by the province, to act on inclusionary zoning and one-for-one affordable housing rental replacements when houses are being demolished, which to date, has not been done.

Herongate is already an established and diverse community. Help us sustain and support it and keep our community alive.

To connect with the Herongate Tenant Coalition email This email address is being protected from spambots. You need JavaScript enabled to view it.

"Under international human rights law, governments have certain obligations. They have obligations to make sure that communities aren't just completely evicted from where they're living." https://t.co/gDaG0wTqu5— Idil Mussa 🇨🇦 (@idilmussa) July 3, 2018

See @leilanifarha's Op-Ed:#HeronGate is emblematic of what's happening in cities the world over. Governments must buck the trend and stop this pattern that exacerbates inequality and & pushes residents out of their cities. #MakeTheShift #Right2Housinghttps://t.co/bwAjqAnzbN— UN Special Rapporteur on the right to housing (@adequatehousing) July 6, 2018

As someone who grew up in the area, Mumina Egal felt passionate about the Timbercreek evictions and is mobilizing with other members of the Herongate community to hold the company accountable.