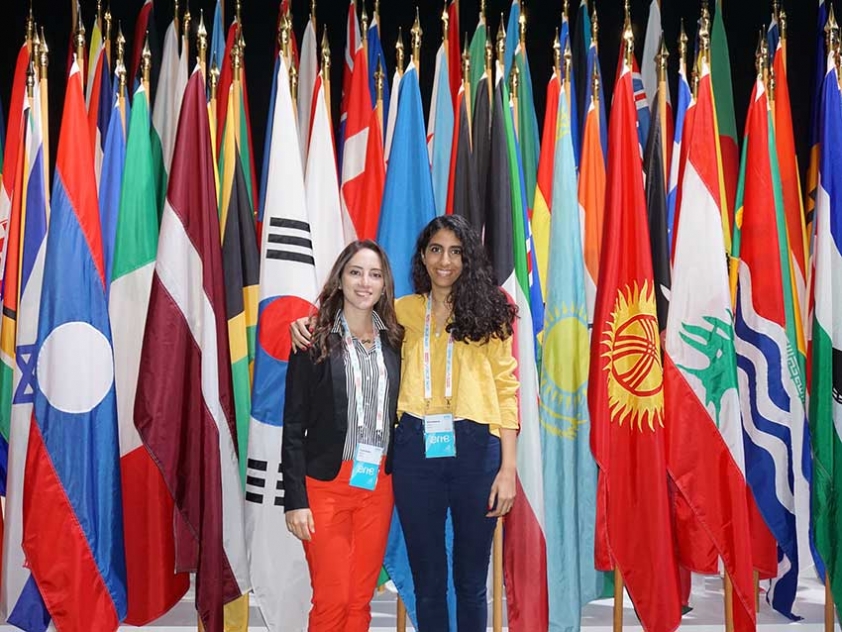 Dhilal Alhaboob: Meet One of Canada's One Young World Ambassadors

Yemeni Canadian Dhilal Alhaboob had the opportunity to participate in the One Young World Summit which took place in Ottawa from September 28th to October 1st. She represented both Canada and Yemen. Muslim Link interviewed Dhilal about her experience at the summit which gathered together young leaders from around the world.

I’m a student at the University of Ottawa, completing an Honours Bachelors in International Development and Globalization. I’ve always had a need to do my part in making the world a kinder place, and I do that through my involvement and work with organizations like Pathways to Education Ottawa and the Student Federation of the University of Ottawa, the Ministry of Children and Youth Services, and clubs on campus.

From 2013 to 2016, I worked around how government can support young people in Ontario as a part of the Premier’s Council on Youth Opportunities, but I am all over the place on a campus, municipal, and provincial level.

I’m Yemeni Canadian, and I’ve lived in Ottawa for the last five years. My mother is a Yemeni actvist on issues of governmental reform and peace in the country. She engages with many stakeholders in Yemeni politics via social media outlets and works with organizations who coordinate aid on the ground.

What is the purpose of the One Young World Summit?

The summit brings young change-makers from around the world together for a series of talks, panels and workshops on social change, businesses as motors for change and the role of innovation in making the world a better place. You really build an international network by the end of the three-day summit, which also marks the initiation of delegates to the role of Ambassador of One Young World.

How were you chosen to be a Canadian Ambassador for this conference?

Matthew Teghtemeyer, Interim Manager at Pathways to Education Ottawa, let me know that the Community Foundation of Ottawa (OCF) had reached out to them about sending an Alumna of the Pathways program to the One Young World Summit. I used to be a part of the Pathways to Education program in high school, which helps youth who live in Ottawa Community Housing graduate from high school and continue on to post-secondary education. I met with Bibi Patel and Chayanika Lutes from OCF and a few days later, they contacted me to let me know that the donors wanted to sponsor my attendance as a delegate.

What were some personal highlights of the conference for you?

There were four. One was hearing the father of the Three Zeros and Microfinance, Mohammad Yunus, speak in person. I was in awe. I remember jotting down his every word. The second was meeting some women from BRAC (Building Resources Across Communities), a Bangladeshi international development organization, which happens to be the biggest NGO in the world. To be speaking to women from one of the most discussed organizations in my lectures truly changed the way I saw development. Conversing with Nafisa Islam and Alam Nusrat Jahan from BRAC reinforced my belief in the power of local community building. The third was a conversation two women from South Africa about opportunity inequality post-apartheid. They spoke to me about all the hoops they went through to attend the Summit and how hard they had to fight to come to Canada. The last was a conversation with Shahm Maskoun, who fled to France from Syria and created Wintegreat, an integration program for student Syrian refugees in France, and Kinda Kuzbari, who is also Syrian. Both were a part of the Western Union Delegation. We spoke about cultural resilience and how diasporas can help the people of their country of origin.

What are some key learnings you are taking from the Summit?

The first is the importance of starting small. If the work you are doing is needed, the community that will rally around your goal and support you throughout will show itself to you. The other is the key role of financial innovation in both funding your work and giving the economic means to the people you help to get on their own two feet. Social enterprise really struck a chord because discusisons explored how you should be paid for the work you do, and I see so many young people like myself who want to help but don’t know how to generate money in the process in order to hire people to work for them, sustain themselves, or even build equity - particularly when they are first-generation immigrants to Canada.

What are your future plans and how has the conference influenced them?

I’ll be in school for quite a while, even if just to explore the intersections of development and conflict with water systems and irrigation technology. I’m building up my club WaterFor on campus for the time being, which raises awareness and funds to fight water scarcity in Canada and around the world. As an international organization, I’ve partnered up with my mother to reach NGOs on the ground in Yemen, like Khairon Foundation for Relief and Development, that is currently distributing water to people who don’t have the means to buy their own. Emmanuel Lulin, Senior Vice-President of L’Oréal, who said “Avoid the lawful but awful things” in a talk about ethics in business during the Summit made me think about how we can very easily sit and watch as those around us struggle without any immediate repercussions to ourselves, but that it doesn’t render our inaction valid. I want all of my future plans to embody that.