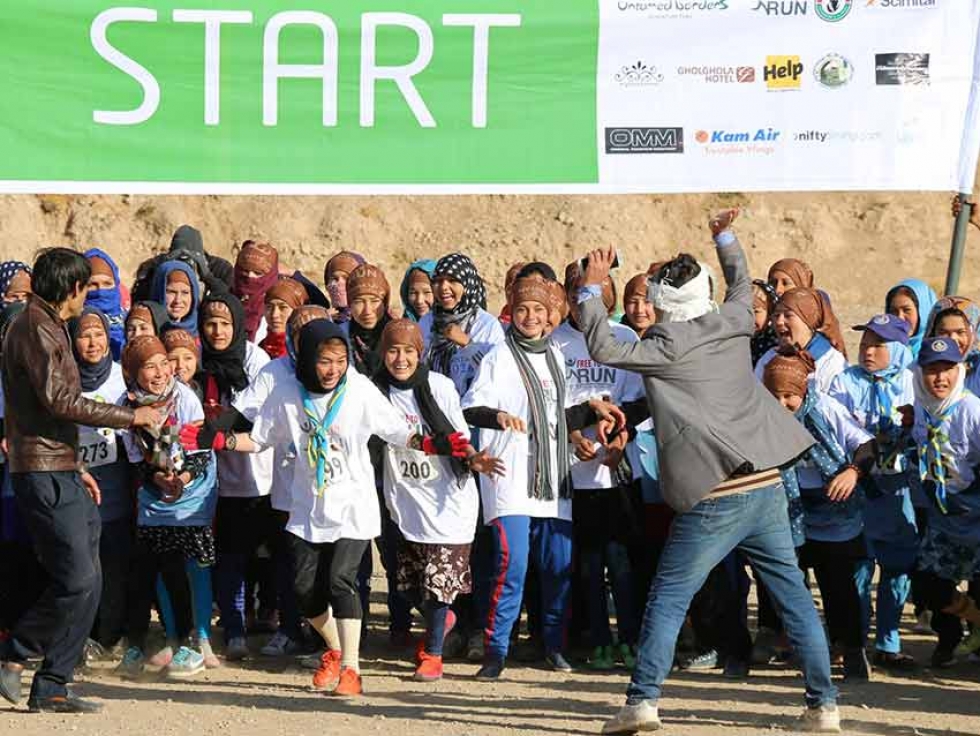 When legendary Canadian marathon runner, Martin Parnell, had a life threatening blood clot he was inspired to recover and run again when he read about the first courageous Afghan woman to participate in a marathon in her own country, Zainab. He invited young filmmaker and Ryerson University graduate, Kate McKenzie, to join him in documenting the journey and trained her to run her first marathon. The result of this journey is the documentary "The Secret Marathon" which will be released this year.

For the second year now, and coinciding with International Women's Day, the team behind "The Secret Marathon" partnered with The Running Room to organize a 3K run or walk in Running Room locations across Canada in order to raise awareness about women's right to run outside safely, something which is not only a challenge in Afghanistan, but also here in Canada.

This year, the 3K run or walk took place on March 6th and raised over $10,000 for educational programs in Afghanistan run by the charity Canadian Women for Women in Afghanistan.

So, I’m Afghan-Pakistani Canadian. My parents are both Afghan but both of their families have lived all of their lives in Pakistan and I lived in Pakistan as well between 2004-2010.

I’m currently in my last year of journalism at Ryerson University! As a journalist, the main reason I have entered this field is to highlight stories of people from my Afghan and Pakistani background. I think it’s so important to bring that representation in a world of media that is heavily white and where there is a lot of misunderstanding when it comes to our communities.

I'm also an avid cricketer and am a founder of the Ryerson University's Women's Cricket Team!

How did you get involved in "The Secret Marathon" documentary and what is your role?

The executive director of "The Secret Marathon", Kate McKenzie is my supervisor at my part time job at Ryerson University's Transmedia Zone, an incubator for creative storytelling.
I expressed my passion for documentary journalism in countries like Pakistan and Afghanistan to Kate. That’s when she told me about The Secret Marathon and asked me if I wanted to join her team because she thought I would be a positive asset to the team. It seemed like the most perfect fit for me and I genuinely felt like Allah was answering my questions and guiding me straight into the career path I’ve always been passionate about. That’s when I joined the team as a production assistant and have been loving it ever since!

What did the March 6 Fundraiser raise funds for?

These funds are going to Canadian Women for Women in Afghanistan. They’re an organization that focuses on female empowerment in Afghanistan. The specific funds raised during the 3K Marathons across Canada, both at Running Rooms and virtually, specifically would be going towards creating sustainable educational resources for both teachers and students in Afghanistan.

Why should people participate in these annual 3K Marathons?

As an Afghan-Pakistani and as an athlete who had to overcome countless barriers for the sport of cricket, I can’t stress enough how much we take for granted.

This run/walk is so important for me because I have first hand experienced the way certain cultural and patriarchal practices effect women in the public sphere, especially for women who want to participate in sport. Afghan women have been suffering and have been at the bottom of the spectrum for every political decision that has taken place in Afghanistan. . However, every year, the number of Afghan women participating in the Marathon of Afghanistan increases and it should be something we celebrate and support. Not only for Afghan women but also as a reminder to everyone else that Afghanistan isn’t only a sob story of war and terrorism. It is also a story of resilience, strength, positivity, and empowerment.

How else can people get involved in The Secret Marathon Project?

Our film is going to be done by April and we’ll be sending it to film festivals soon across the country and the globe! As someone who has worked behind the scenes with Kate, the moral support we receive from our followers is so important to keep us going. Both of us talk about the positive feedback we get so often during our time working on "The Secret Marathon" together and it takes us a long way.

The year we hosted The Secret Marathon 3K in 16 cities in Canada and 10 virtual locations worldwide! Joining us on this run helps the cause so much more and we can’t thank all of our wonderful race directors and runners enough.